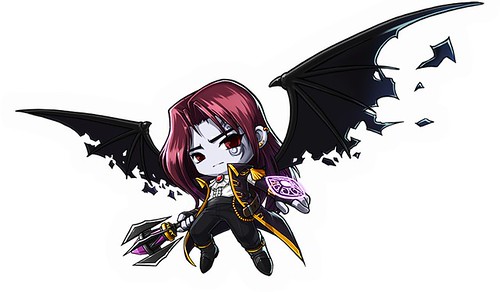 Maple Story is a descent free-to-play, side-scrolling MMO RPG with a huge community. Wizet has been expanding Maplestory in different ways and the latest update features new classes like Demon Slayer, Cannon Shooter and Mercedes.

Old classes also get some additions but being a Maple Story fan, you should try these new classes first. In the following guide however, I am going to dissect “Demon Slayer” class.

Demon Slayer used to be a servant of the dark ruler, the Black Mage. He served the ruler many years and then one day, he notices that the Black Mage is like an absolute ruler and he can no longer can serve him.

When he meets Akylum, one of Black Mage’s generals, he finds out that they are planning to destroy his town. He quickly heads back to save his family but he finds nothing but the ashes there. With a heart burning with redemption, he has joined forces with Resistance and aims to free Edelstein and atone from his past at any cost.

The Demon Slayer can wield one handed weapon (like an axe or any other blunt weapon) and carries a shield exclusively made for the Demon Slayer, the “Demon Aegis”. He also uses a different form of energy (Fury) than the regular MP. The gauge increases on hunting down the monsters.

Demon Impact
Demon Slayer’s dormant power gets activated and deals damage to multiple enemies in front of you. The damage is increased when you are facing a demon boss.

Demon Cry
The skill not only deals damage to the surrounding enemies, but also lowers the target’s attack, defense, and accuracy stats while raising the item drop rate and EXP for the player.

Dark Metamorphosis
The majestic wings of the Demon Slayer can let you do stunts like double jump and glide.

Strength (STR) is the primary attribute of the Demon Slayer so you should spend most of your Ability Points (AP) in this attribute. To increase your Max Forc (DF) however, you can do advanced jobs and equip shields.

Demon Slayer equipment include Scepters and Force Shield that he uses to boost the stats and MaxDF. With more MaxDF, you can use more Force skill. You can unlock equipment by reaching the specified level.

Force Shields
You level up the stats but they are not trade-able.

Force Shield of Will (level 30)

Scepters
They have 7 slots, not trade-able and require no DEX:

Demon Jump
You need to use Asmodian wings to perform different jumping moves:

Death Curse
The move has multiple advantages. It not only can kill the enemy instantaneously but you can also restore HP and get some force on enemy’s death.

Demonic Blood
Max Level 1: +20 will, +20 Charisma and they is maximum chance that you will not get knocked back. Yes, you will get the 4th job power stance of Adventurer Warrior instantly at the beginner level.

Skills Demon Slash
With every hit, the slash deals more damage to the enemy and with the 4th hit, it does more damage than any other Demon Slayer skill using force. The Demon Slash is upgraded automatically when you complete 2nd and 3rd job.

Devil Scythe
You need Demon Slash 1 for this job. You need to summon demon’s sickle to attack a number of enemies at the same time. You can hold skill’s key to deal damage up to 8 monsters and deal 85% damage 3 times. Costs you 3 force and 15 HP.

Demon Booster
You need demon slash level 5 for this skill. It will boost your attack speed by +2.

Dark Agility
Demon Slash level 1 is required for this skill. It will increase your accuracy (+200), speed (+25) and jump (+20) permanently. These attributes will help you move quickly through different spots.

HP Increase
Your maximum HP is increased (+20%). The skill is useful specially during boss fights.

Go to next page for Skill Builds and Tips on the rest of the job skills.

Demon Slash First Reinforcement
Demon Slash Damage is increased permanently (+40%). The skill will be automatically added when you advance to the 2nd job. It is recommended that you max up your Demon Slash skill in the first job skill table to get maximum advantage.

Weapon Mastery
Boosts your master (+50) and Accuracy (+120) to reduce the gap between maximum and minimum damage your hero deals. The stats are for one-handed blunt weapon or the axe.

Outrage
Your critical rate (+25%) and damage (+25%) is increased permanently. This will enable you to take out enemies fast as critical hit chance is increased.

Soul Eater
It’s like a black hole which can pull the enemies in front of you and deal the damage. Costs you 45 HP and 6 Force and has 4 attacks.

Dark Thrust
A rush towards the enemies can damage up to 8 enemies 3 times during the run. Will cost you 10 force. At level 1, this skill allows you to travel through the map quickly.

Demon Trace
You can find enemies around you and attack them. There is also a chance (90%) that you will stun the enemy for three seconds. It will cost you 18 force and you can attack up to 6 enemies. You can use this skill effectively against the hackers as you get near them instantaneously.

Dark Revenge
You will return the damage back to the enemy and there is a 90% chance  that you will paralyze the enemy for 5 seconds. It will cost 150 HP and the duration is if 180 seconds.

Physical Training
Your strength (+30) and dexterity (+30) is improved.

Max Force
You will Slash Forward and there is a 75% chance that you will absorb 10 force every 4 seconds.

Dark Judgement
You can attack multiple enemies from both ends. It will cost you 300 HP and 20 Force. You can attack up to 10 enemies.

Bloody Raven
You can summon a group of red ravens who will attack the enemies and then you can restore some of your HP (40%) too. Will cost you 25 Force and you will get 4 attacks. The cool-down is 10 seconds.

Demonic Breath
You can deal damage up to 10 enemies. The skill costs you 12 Force and 80 HP. You need to hold skill’s key to execute. It will last for 8 seconds and each second can cause 169% damage.

Evil Touch
Damage (15%) and critical hit rate (15%) is increased. Monster’s status effect should be active for this effect/

Concentration
Attack speed is increased by 1 and you get a 25% boost in the damage.

Force Guard
You get 30% chance to guard when hit. If the guarding goes successful, you will recover 5 force.

Demon Impact
Impacts multiple enemies for lethal damage (400%) and when you fighting a boss you will 100% critical rate boost. You will also ignore 50% of its DEF and the final damage is increased by 30%.

Vampiric Touch
For 180 seconds, the damage will be healed as HP (not more 3% of the MaxHP per hit). It costs you 50 force.

Maple Warrior
For 900 seconds, all the stats of the party members is increased by 15%.

Dark Bind
Up to 15 enemies can deal damage through this attack. The duration is 20 seconds and the cool-down is 120 seconds. It also ignores 30% of the enemy’s DEF permanently.

Infinity Force
You can use skills without your force being consumed for 30 seconds. Will cost you 120 Force. The cool-down is 300 seconds.

Don’t agree with us ? share your own skill builds to complete these jobs in the comments below!