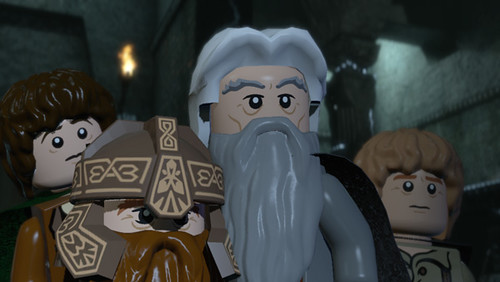 Most of these characters will be unlocked after you complete different missions, others can be bought except for DLC characters, which will be made available via DLC.

The following guide will provide you information on unlocking different characters in the game:

Aragorn
Aragorn is unlocked after completing the Pass of Caradhras which is the fourth story mission in the game.

Aragorn (Gondor Armor)
This specific version of Aragorn is unlocked once you finish the seventeenth story mission namely; The Black Gate.

Arwen Evenstar (Ranger)
Arwen Evenstar is unlocked similar to vanilla Aragorn, that is; you obtain her after completing the Pass of Caradhras

Berserker
Code: UE5Z7H
When you are in Helm’s Deep, he will attack you while you are around the staircase. Kill him to take the token, and then you can purchase him for 200,000 studs.

Bilbo Baggins
Code: J4337V
In Rivendell, after Frodo has been healed by Elround, walk of out of the room and move downstairs. Head left and use the first stairs leading to another room. Near this room, you will come across Bilbo Baggins who will be standing at the top of the stairs. He can be bought for 125,000 studs.

Bilbo Baggins (Old)
Make your way to Hobbiton and you will find a hobbit hous with a green door towards the north-east of the map. Here, you will find Bilbo walking around. The price to unlock this character is 125,000 studs.

Boromir
Boromir can be unlocked by making all of the 30 Blacksmith Designs in the Blacksmith shop found in Bree. A total of 18 designs can be found by playing through the story missions and 12 can be found in Middle-Earth Overworld.

The Boromir (Captain) can be found in the east of Minas Tirith during the daytime. Can be unlocked for 200,000 Studs.

Celebron
While you are in Lothlorien, you need to look for him in the highest treetop structure in the town. It’s in the north side. You can unlock the character for 200,000 studs.

Go to the top of Minas Tirith to the map stone, and you will be able to dig out a plant whilst being Sam; jump off of this and grab onto the bar on the tower. Now climb the tower, and you will find the guard whilst climbing up. Can be unlocked for 25,000 Studs.

Corsair can be found east of Edoras walking around during daytime. Can be purchased for 25,000 Studs.

Travel to Minas Tirith’s Mapstone to find Denethor standing against a wall. Can be unlocked for 125,000 Studs

Alternatively, Elrond can also be unlocked by fast travelling to Rivendell. Make it night. Go to the South of the Map Stone where you will find a set of bricks that Gandalf can move. Move a stone on top of the Lego Base. As a different character, get on the piece and now switch to Gandalf again. Raise the piece in the air above the surface of the area you are going to land on. Simply switch to a different character and get on to the platform. Here, you will be able to buy Elrond without going through the hassle.

Go to Rivendell and head down the Northern Path until it splits, and then head left. At the end of your path you will find Legolas’ archery pole points. Shoot these while being Legolas and then swing across to the top and get to the platform. Now, destroy all the bricks blocking the hobbit hole. Now switch to a shorter character and crawl through it. Go ahead and buy Elrond now for 200,000 studs.

Eowyn
She is in Edoras, in a cage which is raised. You may have to use the rope to get the bricks out of the way. You can have her in 125,000 studs.

Eowyn (Dernhelm)
This variation of Eowyn can be unlocked after you complete the sixteenth story mission i.e. The Battle of Pelennor Fields.

Faramir
Faramir is unlocked after completing the eighth story mission, The Dead Marshes.

Frodo Baggins
Frodo is unlocked once you complete the second story mission, The Black Rider.

Frodo Baggins (Disguised as an Orc)
This variation of Frodo Baggins can be unlocked after completing the fourteenth story mission known as the Cirith Ungol.

Frodo Baggins (Shire)
This variation of Frodo Baggins can be unlocked after completing the third story mission, Weathertop.

Frodo Baggins (Weary)
This variation of Frodo Baggins can be unlocked once you complete the eighteenth story mission, Mount Doom

Galadriel
Code: 7B4VWH.
She is right next to Celeborn (already mention above) at the highest structure in the town in the north end of Lothlorien. The price tag is 200,000 studs.

Gandalf the Grey
Gandalf is unlocked by simply progressing through the story; he will be accessible after copleting The Mines of Moria, the fifth mission in the story.

Gandalf the White
Gandalf will be unlocked after you finish the tenth story mission, Warg Attack.

Gil-Galad
Gil-Galad can be found behind a gate you can unlock by using a crank found south of Mount Doom. Find Mount Doom and head East. Head to a stone tower found North of the D in Mordor. Dig it up to reveal a bounce plant and use it to land on the small tower. Use your Berserker or Mithril Fireworks to destroy the block. Now use Merry’s fishing rod to get to the crank. Use the crank down to the gate, put it in and turn it. You will be able to purchase Gil-Galad for 125,000 Studs.

Gimli
Gimli can be unlocked after you complete the Fifth Story Mission, The Mines of Moria.

Gloin
Go to the Rivendell Map Stone and head to the Southern end of the town. Cross the Islands where you will find a cave blocked by Mithril Blocks. Destroy these using mithril fireworks or the Berserker. You will find Gloin standing in the cave after you blow the cave. He can be purchased for 25,000 Studs.

Gollum
Can be unlocked via either of the two story missions, Taming Gollum (Seventh Mission) or Osgiliath (Twelfth).

The ranger will be standing alone in the ruins on the East Side of the river in Osgiliath. Can be purchased for 25,000 Studs.

Gondor Soldier
Towards the Western Side of the river in Osgiliath, you can find the soldier in the Northern Ruins.

Gothmog
Can be found Southern End of Barad-dur Tower in Mordor. Gothmog will ambush you at the entrance of the tower, hit him thrice to be able to purchase him for 125,000 Studs.

Go to Isengard at night and you will find him at the base of the tower. Hit him thrice to be able to purchase him for 200,000 Studs.

Grishnakh
Go to Isengard at night and go to the North-East of Isengard to the forest and Grishnakh will jump you in the Northern part of the forest. Hit him thrice to be able to purchase him for a price of 125,000 Studs.

Haldir
Near the Lothlorien Elf, you will find a big staircase surrounded by statues. Go up the stairs to meet Haldir. You should have 200,000 to unlock it.

Hama
Code: 73HJP6
You can fund him standing in a guard tower beside a big fence. You will have to jump across the steep hill to reach Hama. The price tag of the character is 125,000.

Haradrim
Go to Dead Marshes and follow the Southern Path outside of the area. Haradrim will eventually attack you down this path, hit him thrice to buy him for a price of 25,000 Studs.

Isildur
Isildur is unlocked after completing the Prologue of the game.

Travel to Edoras and select night time. Head to the South-East corner of the city and to a path that goes up. At the top you will find King of the Dead purchasable for 500,000 studs.

King Theoden
King Theoden is unlocked via story progression; after completing the sixteenth story mission which is The Battle of Pelennor Fields.

King Theoden (Cursed)
You can find him in Edoras, outside the main structure. He will usually be found near the map stone. You will require 200,000 studs to unlock him.

Legolas
Legolas can be unlocked after you complete the fifth Story Mission; The Mines of Moria.

The Lothlorien Elf can be found at the bottom of the staircase of a treetop home, in the open area.

Unlocked after you complete the eighth mission; The Dead Marshes.

Meriadoc “Merry” Brandybuck
Can be unlocked after completing the third story mission; Weathertop.

Meriadoc “Merry” Brandybuck (Rohirrim Squire)
Can be unlocked after finishing the sixteenth story mission; The Battle of Pelennor Fields.

Mordor Orc
Head West of Barad-Dur, and South of the Black Gate, make sure it is night time and the orc will attack you. Attack him thrice to buy him for a price of 25,000 Studs.

Moria Orc
When you are done with the Mines of Moria mission, you need to head back to the Mines of Mora map stone. Deal with the armored Orc and during the fight, you can purchase him for 25,000 studs.

Mouth Of Sauron
Code: F4M7FC
You need to finish the game at “Level 17: Mount Doom”.

Prince Imrahil
You need to finish the game at “Level 17: Mount Doom” to unlock it.

Radagast The Brown
Code: 5LV6EB
You will run into Radagast if you take the road left to the town (Bree) to the north. The price is 500,00.

Ringwraith
Go to the Weathertop and select night time. Now south of the map stone, go through the winding path to the top. The ringwraith will attack you here, hit him thrice to be able to buy him for 200,000 Studs.

Rohirrim Soldier
Go to Isengard and select night time. You will find the soldier in a field south of the tower purchasable for 25,000 Studs.

Samwise Gamgee (Disguised as an Orc)
Unlocked once you complete Cirith Ungol; the fourteenth mission in the story.

Saruman the White
Go to the Isengard map stone and use Lurtz or Sauron to pull the gate open. Shoot the archery pole as Legolas and start climbing the tower in the middle. Switch to short characters when needed to go through tunnels. You will also need Gollum at one point. As you come out of the second hobbit tunnel, jump up to get the mithril brick and grab the ledge to get on top of the tower to find Saruman who can be purchased for 500,000 Studs.

Sauron (Second Age)
You need to finish the game at “Level 17: Mount Doom” to unlock it.

Unlocked after you complete Cirith Ungol; the fourteenth story mission.

Soldier of the Dead
Go to Edoras and select night time. You will find him in the field east of the city. Purchasable for 25,000 Studs.

Tom Bombadil (Book Character)
In the south-eastern section of Hobbiton, you will find some addition hobbit holes. One of them is Bombadil’s. His size will make it easier to spot him. The price is 125,000 studs.

Uruk-Hai AKA Lurtz
Go to Amon Hen and north to the sheer wall. Climb up and towards the left you will find statues. Lurtz will attack you if you try to destroy the statues, but you can also find him wandering around. He is purchasable for 200,00 Studs after you hit him thrice.

Uruk-hai AKA Lurtz (Newborn)
Code: QL28WB
You need to have a 100% complete save file.

Alternative method: Go to Helm’s Deep and select night-time. You will see him walking around by the big ramp up into the fort. Attack him thrice you purchase him for 25,000 Studs.

Witch-King of Angmar
Head to Minas Morgul and cross the bridge. Use Legolas to make your way to the left where you will find a lily pad that you can use to get to the small beach..

Lego: Lord of the Rings DLC Characters
Following characters will come as DLC and you will have them earlier if you have pre-ordered the game: