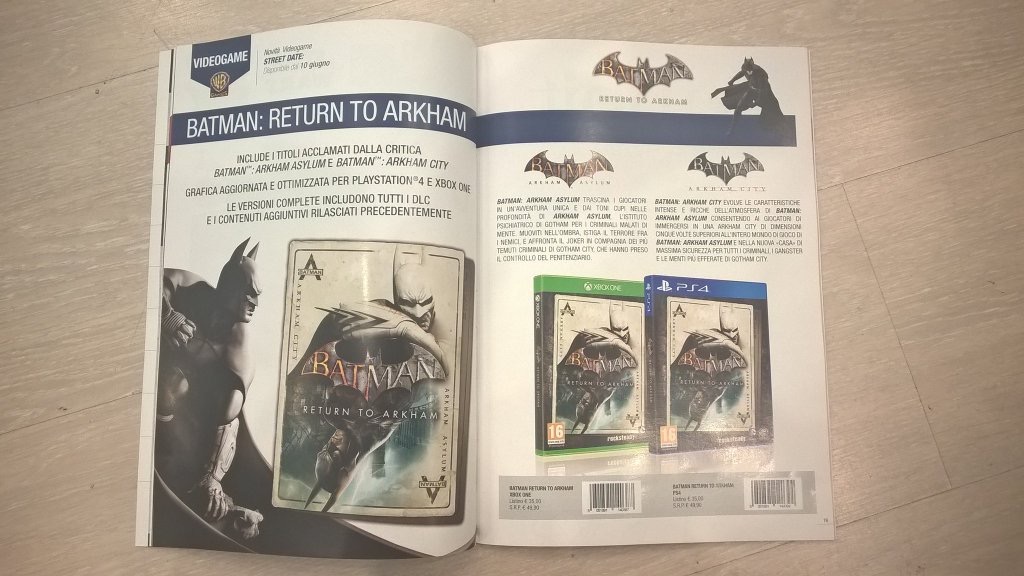 Following multiple leaks about Batman: Return to Arkham, now we have another leak relating to the collection which pretty much confirms that it is real. The leaked photo you see below is of Batman: Return To Arkham box art inside WB games Italian magazine.

The collection is rumored to consist of first two critically acclaimed Arkham games Batman: Arkham Asylum and Batman Arkham: City as it is shown on Batman:Return To Arkham box art, and will be available for Xbox one and PlayStation 4 but not on PC as far as we can tell.

Recently, Batman: Return To Arkham appeared on Italian GameStop website, the collection was priced at  50.98 euros but it could be a place holder.

Arkham Knight was the first Batman game to be released on Xbox one and PlayStation 4, and considering that other games like Halo, Gears Of War have made a jump to this generation of consoles to fully utilize the console’s higher resolution and better graphics. We can safely assume that RockSteady wants to do the same, and this could be true considering that both Arkham Asylum and Arkham City were released on last gen consoles.

If the remastered versions of these games are coming out then according  to a rumor this collection will be available on June 10.

We just hope that these games will be properly ported to this generation of consoles so that fans can enjoy these games at higher resolution and smoother frame rate.

Are you excited about Batman Return To Arkham? Let us know in the comments.