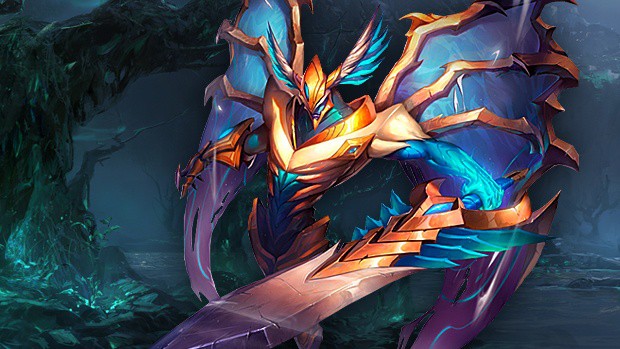 League of Legends Patch 7.5 finally addresses the state of Aatrox but the changes brought forward have only rubbed the community the wrong way.

The Darkin Blade fell off the Rift a long time back, becoming a rare pick in amateur games and an impossibility in professional circuits. With the developer’s promise that Aatrox will be improved with due time, the recent batch of changes were supposed to make his kit better. However, as far as the players are concerned, Riot Games only made the champion worse.

The signature resurrection of Aatrox has been completely changed. He no longer revives based on the amount of health spent on his abilities. Instead, his abilities charge his passive to a certain point.

Once the Blood Well is filled, Aatrox gains “Blood Rush” which grants increased attack speed and damage for just four seconds. If Aatrox is killed during Blood Rush, he revives with a flat 30 percent health.

The new changes to his passive make Aatrox even more difficult to play. No longer can players dive into skirmishes while banking on an a definite revival. It is mandatory that players keep their Blood Wells filled up before moving into enemy territory. Either that or indulge in combat and make sure to gain Blood Rush before dying.

It is infuriating that players must remember to not use any abilities during Blood Rush. The animations only use up the four seconds that are vital for dishing out as much damage as possible with the massive bonus attack speed and damage. Plus, using the abilities after Blood Rush expires helps refill Blood Well quicker.

The new form of Blood Well has changed how Aatrox is meant to be played, a fact that the League of Legends community is not happy about. The champion’s entire style is now based around a small window of opportunity.

The overall damage has been reduced but the ability scales better with each level. It also no longer costs health and fills the Blood Well by 20 percent.

Good news is that Aatrox heals more than before. Bad news is that the additional life-steal boost when on low health has been removed, and the damage reduced. Similar to Dark Flight, Blood Price no longer costs health and fills the Blood Well by 20 percent.

The cost of the ability has been reduced from 5 percent of current health to a flat 30 health. It now deals physical damage instead of magic damage, and the overall damage numbers have been slightly increased. It also fills the Blood Well by 20 percent.

The only ability to not see any changes.

Over on the official forums, the Aatrox mini-update is being pummeled by players. Riot Games may go back to the drawing board to adjust some of the champion’s numbers. Perhaps increasing his window of opportunity would be a start.

Last month, Riot Games confirmed that Aatrox would be part of a large “Diver Class Update” which may arrive at the end of the season. Until then, the Aatrox mini-update will have to suffice.