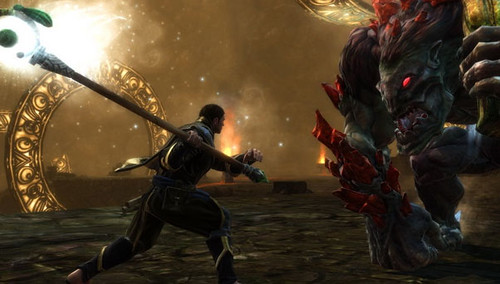 The House of Sorrows faction is quite an interesting one and has its own storyline for players to follow. If you are interested in helping them out, read this Kingdoms of Amalur House of Sorrows Quests guide.

If you’re a Warrior/Rogue with little to no interest in the items of a mage, then there’s no point of really bothering about this faction, since it is primarily recommended for those with enough points in Sorcery to wield a staff and to utilize the attributes of mage armor.

The faction quest-line can only be initiated after you have reached Mel Senshir during the main quest. You’ll either be met by Bisarane outside of the city or you could visit the House of Sorrows itself located in the southwestern part of The Midden.

For more help on Kingdom of Amalur, read our Character Builds Guide.

We’ll go over the quests one by one:

The Sorrows Call
The main objective of this quest is to find the Proving Halls, located east of Mel Senshir. Inside the Proving Halls you will have to fight a few monsters. Some of the monsters are tough, such as the Crudoks, so make sure you’re prepared.

Apart from finding Proving Halls, the quest is fairly straight-forward. To finish the quest the Fateless One should agree to help the house and they will be rewarded with Heartstone.

Voices of the Dead
To initiate this quest, meet with Bisarane in the House of Sorrows, and after that meet Taibreah outside the house. All you have to do is follow her and keep her company until the quest is over.

Then you’ll have to head to the Sioran Crypt, kill Cadorac and eventually return to the House of Sorrows to collect your reward (Sorrow armor set parts) and your next quest from Taibreah.

A House Divided
Once again you’re headed to the Proving Halls. Once completed, your next destination is Fallen Hall, which is under attack by the Tuatha.

Continue fighting enemies inside until you come across a locked door. You’ll have to unlock three locks to proceed. You’ll eventually end up fighting Myrcyr, who gladly isn’t too tough and only needs to be defeated partially. Return to Bisarane for your reward (Robes of Sorrow).

The Eldest
For the next quest, talk to Bisarane and he will give you a key. Take it and go to Damalroc on the Caeled Coast. When you reach the great scale, activate the switch and stand on one of the few glyph-like appearances on the ground.

Monsters will come at you, and you have to kill them and make sure they land dead on the glyphs to proceed forward. Repeat this once again for another direction after speaking to the person you gained access to.

The Weeping King
For this quest you have to go to Sinsear. You can also take a companion with you, either Alarane or Caelrod. Alarane is a Faeblade user while Caelrod is a mage. If you’re a mage, the obvious choice would be Alarane.

Before you proceed, you have to go around the dungeon collecting three votives. Once done, you will witness a few faces that cry periodically. The order in which they cry matches the order in which you have to pull the switches. Grab the obtained key and return to Bisarane.

Such Sweet Sorrow
Speak with Taibreah, and then go and disable the four Nexuses. After that, you will find Bisarane, who is a strong mage with the ability to spawn minions like many other bosses. Once he is defeated, you will obtain ‘Child of Autumn’ Twist of Fate card, and will be able to recover the powerful Sorrow staff.

The Weeping King/Taibreah will seal the Sorrows in his/her being after the fight remaining forever in Esharra and returning the Fateless One back to The Midden.