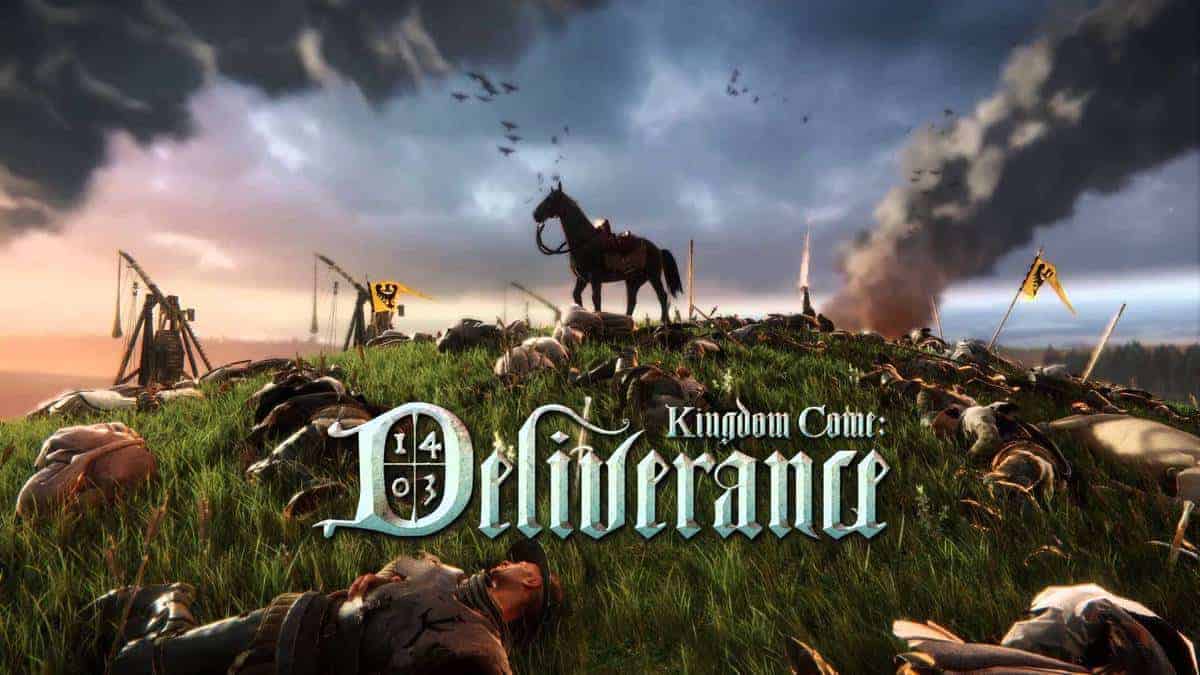 Kingdom Come: Deliverance is an open world game that presents itself like a fantasy RPG, but ensures players are made aware that it is a recreation of accurate historic events from the Bohemian era.

It’s a world obsessed with realism to a relentless degree, and despite the Oblivion-esque music tracks that fill the background and an ambiance largely associated with The Elder Scrolls series, Kingdom Come stays true to its narrative of historic accuracy.

One expects an occult conjuration to manifest behind a tree in the dense forests, or a rogue pyromancer responsible for burning the estate in the distance, but nothing of the sort ever appears.

Within a few minutes of playing Kingdom Come: Deliverance Alpha, the objective and the narrative is made clear: we are in a realistic, dynamic world among ordinary people partaking in ordinary tasks.

The rich green foliage that flanks the dirt road where I began the journey during the alpha was the first indicator of realism. A believable, turbulent breeze gently brushed the dense grass that mixed sublimely well with distinguishable flowers and plants.

In the far distance one could spot thick, black smoke emanating from an unknown source. Closer to my position were a few huts.

The setting immediately marked the black smoke as the ultimate destination in my subconscious mind, but the huts were in the way, and for an open world game, it was obligatory (not really) to explore them first, I felt.

What I came across was a settlement called Samopesh. Occupied by an acceptable amount of folks (and chickens), it struck me as a living, breathing world, one that acted independently from my actions.

For once, a game was subtly indicating how my presence is not the detrimental factor in the existence of its reality. The blacksmith will continue to smith weapons; the farmers will continue to cater their fields – no one will bend towards my existence.

Villagers I spoke to seemed to be caught up in ordinary problems. Yet, the representation of these problems in a collective manner depicted individuality like no other, making them on the whole extraordinary.

The bigger picture was obviously yet to be revealed, but the attention to detail – both visually and in presentation – and the application of these detail created a setting that was surprisingly easy to accept: we as the player in this world act as one normal individual, whose actions can influence the world, but the world is not dependent on them.

After half an hour of admiring the beauty that lies within the extraordinarily ordinary folks of this village (and also drooling at the fantastic visuals), I set to continue my journey towards the smoke.

Making way through chaste fields of green, I arrived at what was a massive structure partially burned to the ground. At the entrance, a notification told me I had discovered Kolben’s Estate. A conversation with the guard gave me a hint of the cause of all this: Cumans.

Kingdom Come: Deliverance was yet again staying true to its historical accuracy, and the nomadic Cumans of the latter stages of the medieval era seem to be centric to this catastrophe, and likely an integral part of the main plot of the game.

Inside lay dead bodies and a heavily wounded soldier, whose companion requested aid for his dying friend so that his final hours may be less painful.

In the hope of helping this man, I set to head back to Samopesh, but my attention was diverted by a military camp that trained medieval sword fencing. At the expense of a few coins, I was given a thorough lesson by a trainer on how to duel with a sword.

This was the core melee combat of Kingdom Come: Deliverance. It certainly swayed away from conventional mindless hack-and-slash fun we’re accustomed to seeing, and introduced a more tactical form of battle that was fairly sophisticated to learn and even more difficult to master.

The intensity of the combat came not from the blows (I was using a wooden training sword after all), but from the complexity of the task itself.

With intricacies such as timing your blocks and perfectly attacking unguarded parts of your foe either through wide slashes or powerful jabs, the sword fighting was admittedly overwhelming.

In my second playthrough I dedicated myself to become villainous, using every NPC as a practice dummy. I was a little underwhelmed how the normal guards failed to test my novice skills the way the trainer did, dying from a few amateurish jabs I executed without much thought.

I never truly met anyone equipped with a knight’s armor who would push me to the limits, but almost all the combat scenarios felt uncomfortably different from the exhaustive training where I learned the basics of fencing.

The melee combat certainly had overall potential, but the consistency of its application is questionable.

Unless a larger part of the foes you meet attempt to test your technique, the fencing mechanics have the capacity to be abused without many repercussions, despite variables like stamina regeneration and health coming into play.

Of course, this is only an alpha version, and we expect a bit of ‘oomph’ too be added to the combat by the time the beta comes along. The ranged combat on the other hand is completely different. It’s not technical like fencing, and is more reliant on a player’s dexterity than any other factor.

The control (or the lack of) and constant shaking adds to the challenge of getting an accurate shot, which also makes archery a constant challenge irrespective of the opposition.

We expect leveling stats within the game to inevitably aid in countering the randomized weapon shake, giving archery great potential in stealth-based builds, but by that time, you’ll have mastered it to an extent that any compensation from stats would become a mere luxury. This made archery not just fun and competitive, it also made it a viable offensive option that could birth a completely different style of play-through if one desired.

After a few hours of toying around with the melee and ranged combat mechanics of the game, I resumed my search for a remedy to ease the pain of the dying soldier. Asking around folks in Samopesh village eventually pointed me in the direction of a forest in the northwestern part of the visible map.

Thick, dense, and undeniably the best part of the alpha, the forest housed a hut in the center, with a prickly old lady with messy hair who possessed the skills to make what I needed for the soldier.

It cost me quite a bit, but it also gave me an opportunity to flirt with the game’s alchemy system, which resided in the hut.

A stove with urns containing oil and water, bellows to start the flame, and an hourglass to speed up the cooking time; it was all very complex, and without any recipe (or ingredients), there wasn’t much to do except attempting to boil a suspension of oil in water, but the alchemy crafting certainly holds potential, and its immersive mechanics should make investing time on it worthwhile in the final game.

After many failed attempts at creating something extraordinary from ordinary items (wasn’t this the entire theme of the game?), I decided to head out and make my way back to the dying soldier.

To my surprise, the sun had set, and nighttime had begun (the many usages of the hourglass had played its part). Normally, nights in games are represented by diminished global lighting, with starry skies and a dense moon illuminating everything around you.

In Kingdom Come: Deliverance, the night is realistically black, with almost nothing visible. The darkness in the forest was as realistic as it gets, with only the faint dancing fire outside the hut illuminating a small radial area around it.

The extremely accurate depiction of the night was an incredible revelation that I have not witnessed in any game before. Although no danger lurked in the deathly blackened forest, it still managed to instill fear in me; fear of getting lost, fear of treading into unwelcome territory.

With haste I went through my inventory hoping to discover a torch. I breathed a sigh of relief as I placed it into my equipment slot, taking it out to make my path back easier.

I never went back to the dying soldier in the end though. The night had mesmerized me enough to explore the dark forest as well as the open fields all over again without the sun above my head.

By that time, Kingdom Come had successfully delivered what it wanted to: an ordinary world presented in an extraordinary manner.