Just Cause 4 Beginners Tips and Tricks to Get You Started 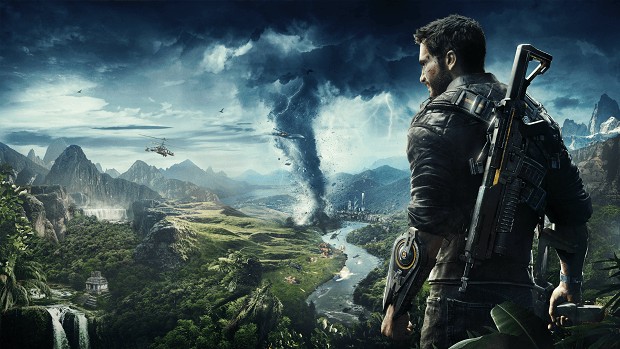 Just Cause 4 has a new engine as well as a lot of gameplay changes to it. This means that there is a slight learning curve for both new and returning players. Our Just Cause 4 Tips and Tricks will tell you how you can do all of the moves that you loved in the previous games as well as more.

As you might know, the grappling hook and parachute are the main weapons that you will be using to speed up your movement as well as move around with style.

Everyone who has played the game will be aware of the mechanic where you can run, use the grappling hook to get up in the air, and then use the parachute to jump about and hang for a while before running back.

There are numerous other things like that which you can perform in the game, let us go ahead and look at some of them.

This is another mechanic that returning players will be quite familiar with. Whenever you are coming down onto the ground, you can use the grappling hook to break your fall.

This is especially useful when you are falling at a high speed and are bound to take damage if your fall is not interrupted. You can also use this mechanic during combat to move around quickly and make sure you are difficult for your enemies to catch.

This is another neat movement tip. Whenever you are using the grappling hook and are airborne, you can switch to your Wing Suit in order to start gliding through the air.

This technique can be used to access many areas that you would not be able to get to just by using your hook.

One important thing to remember is that your fall when you are in your Wing Suit may be quite rough.

For that reason, make sure you have a good landing spot or you can try to switch to your parachute and smooth out your landing a little bit.

3. Use the Weapon Boxes

The slightly glowing crates on the ground that you find are weapon boxes. These are a great way to get new weapons.

Many boxes contain weapons ripe for demolition such as Grenade Launchers and Rocket Launchers. When you see a box, head up to it and open it up to retrieve the weapons inside.

The feature that was important in Just Cause 2 is back in the 4th rendition of the game. Increasing your Chaos Level will get you a lot of new perks such as access to more agents as well as reserves for your squad.

The levels themselves do not work a lot different from how they did in Just Cause 2, and it is possible to increase your Chaos Level by simply playing the game and doing all of the activities that you are assigned to do.

Since the world is so massive and you have a lot of ways to move about, people often do not realize that it is also possible to swim as well as go underwater.

Swimming in the game works similar to most other games and there is a breath aspect to it. Whenever you are swimming, make sure you do not stay underwater for a long time, as it will drain your breath and eventually start to wither your health.

Just Cause 4 has a lot of open spaces which give you the opportunity to take on missions as you see fit. If you want to take down all enemies you see, it is possible for you to do so.

However, you can also go ahead and avoid enemies by using the various different movement mechanics that we have described above.

When you skip by enemies, you can quickly get to the main objective of the mission and tackle that instead of wandering around and shooting everyone you see.

If you do take damage, remember that your health resets really fast and give you a lot of chances to survive each situation.

In many missions, helicopters will attack you. You can destroy them using your Rocket Launcher if you want, but there are other, more creative ways to take them down as well.

If you want, you can steal the enemy helicopters by using your grappling hook and getting to the helicopter.

Once you are attached to the helicopter, all you need to do is to move inside it and take out the enemies inside using either your weapons or your grappling hooks.

Once everyone inside the helicopter is dead, you can move over to the controls and start using their helicopters to combat them.

The game has a lot of structures that can be broken down. Not only can you break down smaller structures, but you can also destroy larger structures such as towers.

Sometimes, a single shot from your rocket launcher may not be enough to take down structures. Do not worry though, as all you need to do is to deal more damage to the structure and it will eventually fall.