Is Destiny Heading to Mercury Next?

Last week Destiny players were given a few gifts to celebrate the coming of the new year. Along with this it Bungie teased an emblem with the “Days of Dawning” which may tease a new location for the game.

What fans are more interested in is exactly what will come of this Emblem. There seems to be some speculation that it may be Mercury, as this is the only inner Solar System planet yet to be available for patrols. The fact that the emblem for Days of Dawning (as seen below) shows a planet, it gives further speculation as to a possible unlocking of the planet. 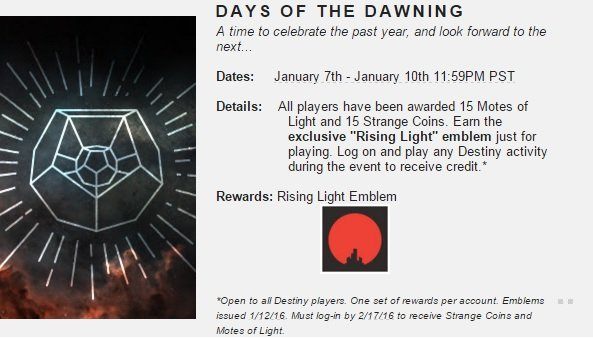 Mercury does have a part in Destiny history, as it was said to be converted to a machine world by the Vex. This of course is what the Guardians are trying to stop on Venus. It makes sense that at some point in time Mercury may become a focus for the game, unless it is being saved for Destiny 2. Though Destiny players will be aware that there are moments where we have visited Mercury, but only fleetingly.

Further teasers for the Dawning can also be found in the Destiny Database, as discussed on the Destiny Forum could these items be making an appearance in Days of Dawning? We’ll have to wait and see. This may appear around January 12 when the emblem is said to unlock, or we’ll have to wait to see if the Emblem is actually teasing anything at all.

Do you think Destiny may unlock Mercury to players? Let us know your opinion below.