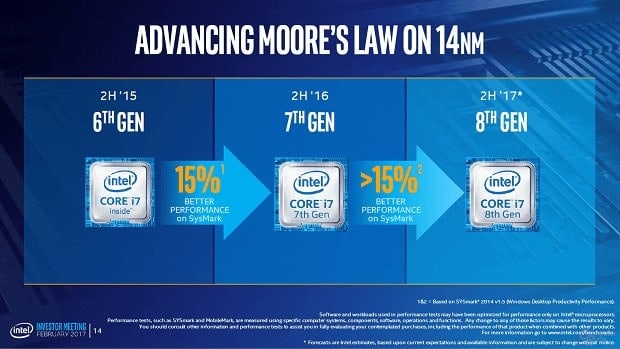 If you were planning on getting a new CPU then you might want to wait a bit. The Intel Coffee Lake, 8th generation CPUs will be coming out in the second half of 2017 and it seems that they will provide a 15% boost in performance as compared to the current Kaby Lake line of CPUs. The big question here is whether or not the new generation will offer enough performance to justify an upgrade.

We have seen the difference in performance between Skylake and Kaby Lake and there are those who will tell you that the performance boost that Kaby Lake has to offer is not significant. They would be right in saying so.

We already know about the high-end CPUs, the Skylake-X and Kaby Lake-X CPUs that will be coming out soon. These will feature 4,6,8, 10 and 12 core variants. Intel Coffee Lake CPUs will be the mainstream variants the average consumers will be interested in. Reports claim that this will be the first time that Intel will release a 6-core CPU for the mainstream user.

Previously it was planned that the next generation of CPUs would launch next year at CES 2018. Now that AMD is posing a threat it seems that Intel is in a rush to introduce something new in the market and do some damage control. You can expect to see these CPUs hit the market as soon as August. These chips will be supported by Z370, H370, B360, H310 based motherboards.

As of right now, we have no information regarding the boost clock and seeing how this information has come out so early it is possible that this is an engineering sample and the final clock speeds will be higher than what we have mentioned here.

If you were wondering whether or not you will be able to use your current motherboard with the new CPUs then you will be delighted to know that from what we know so far, Intel Coffee Lake CPUs will support the LGA 1151 socket and currently available motherboards as well.

We have also seen some specifications of what we think will be mobile CPUs that will be a part of the 8th generation CPU family. The i7 CPU in question here has 4-cores and 8-threads, unlike previous i7 processors that come to the mobile platform and feature 2-cores and 4-threads. The base clock is 1.90 GHz and the CPU boosts to 2.11.

We will most likely be getting an official announcement from big blue at Computex in June 2017. It will be interesting to see the performance boost that these CPUs will have to offer and we will see whether or not Intel has learned from AMD or not. Intel might decide to do what it has done over the years. That would not be good business.

Let us know what you think about these upcoming 8th generation CPUs from Intel and whether or not you are interested in buying one.