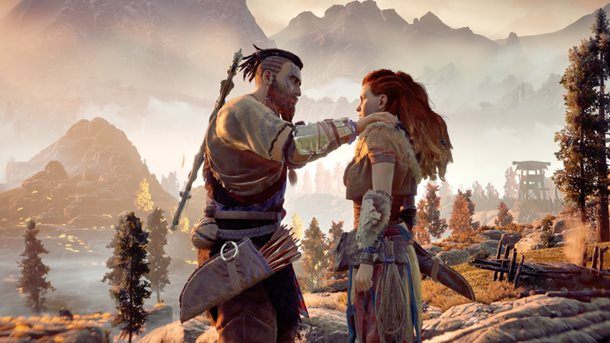 Following Horizon Zero Dawn Flashpoint Choices guide will help you figure out the best choices for the player.

There are three options to choose from every time a Flashpoint choice presents itself. The result of your choice will have an impact on how the situation turns out for Aloy. You can go with Confront, Insight or Compassion.

Depending on your choice, Aloy can go violent, deal the situation with compassion, or think of a middle ground. Keep in mind that these choices are strictly for RPG gameplay and not for developing a better connection with Aloy.

Bast Flashpoint
The first choice you will come across is near the beginning of the game when Bast hits you with a rock. You will have three choices in front of you. Confront means hitting him back with a rock on his head. Insight will make the rock hit his hand while compassion will make Aloy take the high road.

Your choice will have an impact on your next meeting with Bast years later.

Bast Flashpoint 2
The second time you meet Bast is at the Proving where you will once again have three choices. You can confront him and let him know that Aloy will win the contest. You can also show insight and tell him how he is afraid of losing to Aloy or show compassion tell him how about your feelings pity.

Rost Flashpoint
Another choice will present itself when Rost says goodbye to Aloy. Once again you will have three choices. Aloy can use insight to tell him that this meeting is not goodbye and you will find him wherever he is. The second choice you have is to confront that will result in a heated debate between the two characters.

In the end, Rost will leave with a frown on his face and Aloy standing theirs in anger and disappointment. The final choice you have is compassion, where Aloy will tell him how she understands and the situation at hand and she will always remember him.

Olin Flashpoint
In this quest you have to search for Olin and talk to him after clearing the area. Over here you have to talk about why and who wants to kill Aloy.

Other than that, he will tell about his family. From that point you will be given three different choices.

First one is of the complications in which things aren’t clear and you can hear him out further. Second option involves letting him go and helping him save his family. Third option is of killing him. Second and third option will decide Olin’s fate.

Avad Flashpoint
After meeting Avad first and defeating Dervahl for what he was planning to do, you have to go meet Avad again.

After communicating with him for the second time there will be a point where he will ask you to stay after which three major choices will be provided to you. Each choice you make will result in a different outcome in the next encounter with him.

First choice will be of not staying and leaving straight forward. Second involves getting used as a substitute as Ersa died and Avad finds the same capabilities in Aloy. Third one is of being used as Ersa, to provide him strength not and only advice.

Lansra Flashpoint
After defeating the big metal demon and talking to Varl, go and meet Lansra. Over there Lansra will try to stop Alloy from entering the hatch as she thinks Aloy is here to wake up the metal devil or her father. There you will get three choices.

First involves ignoring them and walking towards the hatch. Second is by saying bravely that nothing can stop me and third is asking Lansra to let go of her fear. All of these choices will have an impact when Aloy returns from the hatch

Resh Flashpoint
At one point in Horizon Zero Dawn, you will have to ask Rest to open a gate which he will decline. From here, you will have three different choices. You can show compassion and call him out on discovering the memory of the dead. The second choice you have is insight which is kind of confrontation as Aloy tells him that he is a nobody which is going piss him off.

The final choice we have is a confrontation, where Aloy with threatening Resh. Keep in mind that all choices have an impact on your relationship with other characters, they do not have any impact on the outcome of the story.