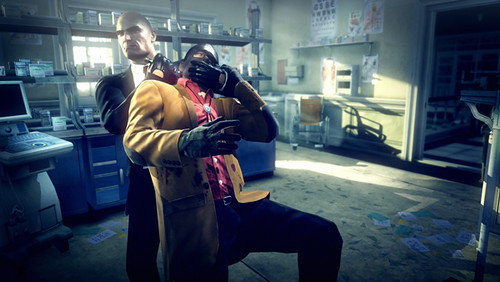 In Hitman: Absolution, agent 47 gets rated for his performance in each stage according to how many people he kills or how many times he is detected (there are several other criteria upon which he is judged). The highest rating you can get is the ‘Silent Assassin’ rating, and as this rating understandably difficult to achieve, we’ve compiled a small Hitman Absolution Silent Assassin Rating guide to help you with it.

In Absolution there are points that Agent 47 receives and there is a multiplier on them based on the level of difficulty, on some levels you can only earn Silent Assassin on the hardest difficulty.

Ways you can earn this are:

Mission #2 – The King of Chinatown

The King
You do this mission in the crowded streets and alleyways of Chinatown, and since the King (your target) is in the main square it can be difficult to take him out without attracting a lot of attention. The way to do this is to trip the alarm on the King’s car (quietly taking down the lone guard there) and ambushing the King when he comes to investigate.

The King’s car is located in a secluded alleyway to the left of the main area, past some food stalls. There is a lone guard here, but if you wait for a few moments, he walks over to the other side of the alley (from where no one will see you take him down).

Collect the evidence: In the central market, there’s a pagoda. Inside the pagoda is a table with a coffee cup and a dossier containing the Evidence.

Trip the alarm and hide yourself (preferably near the crates) when the King starts messing around with his car, stealthily take him down, hide his body, and exit the area.

Note: Do not kill the guard near the car or you will not get the rating.

This mission also takes place in the crowds of Chinatown. This time you have three targets to assassinate; Larry Clay, Bill Dole and Frank Owens.

Larry Clay
To kill Larry Clay discreetly you need to find him standing in a lone alleyway which also includes a gas pump. Sabotage the pump and Clay will die on his own. When you begin the mission go straight across through the throngs until you reach a slightly secluded area with crates and a delivery rickshaw.

There is a hole in the wall to your right. Go through it, but be wary as there a guard somewhere nearby who will grow increasingly suspicious if you don’t go through fast enough (thus cutting the line of sight).

Fiddle with the gas pump on the other end of the alley and wait for Clay to show. Once he’s there you can leave the way you came or stay to watch what happens to him.

Frank Owens
To kill Frank Owens, you need to kill him by throwing him down an open shaft in the ground near where he stops in a secluded alley. Head straight after going through the brick wall while veering left and slip into the alley to the right of the Tattoo parlor where there should be a checkpoint.

Go up the stairs here and drop down from the ledge. Take note of the open shaft and the nearby dumpster.

Hide in the dumpster and wait for Owens to come into the alley with another man. They get into a conversation, and Owens pushes the other man to the ground while pulling out a gun. Jump out of your hiding place and shove him into the open shaft.

Bill Dole
To eliminate Bill Dole you don’t even have to get your hands dirty. He’s negotiating a deal for a file which contains information on Birdie, steal the file stealthily and the deal will turn sour, eventually resulting in Bill being shot.

Go straight across from the alley near the tattoo parlor all the way to the other side of the map, Look for a set of stairs leading to a lower area where there is a ventilation duct.

Enter the duct and go to the end but do not exit just yet. Wait for Bill to arrive and let the meeting begin, when you hear someone say, “The guy is a ghost” exit the vent and sneak along the low wall. Snatch up the file and watch the proceedings.

There are a total of six targets you need to eliminate, spread across two parts of this mission. The target in the first part are; Tyler Colvin, Landon Metcalf and Gavin LeBlond.

Tyler Colvin
When the mission begins, just walk forward to the intersection and enter the store to your left. The girl who’s inside will immediately tell you that they’re closed, but you can duck behind the counter and proceed to the back room (behind the colored beads).

Head up the stairs and enter the room. Once inside hide behind the door and wait for Tyler Colvin to enter, it can take a while for him to come back but stay patient. Once he’s there he’ll be on the phone with someone with his back very conveniently facing you. Kill him, stuff his body somewhere, and exit the way you came.

Landon Metcalf
To find Landon Metcalf, you need to enter the Car repair shop, head around the side until you get to the red two-door car. You’ll be in the hostile area now. Use the door near the back end of the car to enter, and keep going until you see a bunch of tires piled up right in front of you.

Throw the wrench behind him and slip into the room. Go straight across until you get to the long hallway. You’ll need to be sneaky and fast here, as there is a guard who will notice you, but if you move fast enough you’ll be on the terrace before he gets suspicious.

Hide towards the right side of the terrace and wait for Landon to show up. Garrote him, then go back to the kitchen and make a right. There’s another door at the other end of the kitchen. Go through it. Go to the bottom of the stairs for the next kill.

Gavin LeBlond
Killing Gavin LeBlond is arguably the hardest task on this level. Open it and peek out. To your right will be a mechanic who patrols back and forth. Move out only when he’s walking away from the car he’s working on.

Time your movements and head toward the other opening of that garage. There is a purple car and a guard here with his back to you. While keeping an eye on the mechanic, subdue the guard and stuff him in the container.

Hide against the driver-side door of the purple car and wait for Gavin to walk by. Eliminate him when he does so, but make sure to time it right or the mechanic might see. Stick him in the dumpster and exit the area.

Mason McCready
Now in the second part first we kill Mason McCready. Go straight and you’ll notice a lower level, drop down from the ledge to it and go across to a barrel with a wrench on it. Grab it and interact with the electrical wiring to the left of the barrel. Then activate the power to the right of the barrel.

Face the wall opposite the power box and you’ll see a ledge. Climb the ledge, turn the corner, and pull yourself up to another ledge. Make your way to the window and go across it to the corner, eventually you’ll see Mason start to stroll down to the lower level.

The idiot decides it would be a good idea to take a leak on an obviously sparking live wire. Either way, he’s dead so go through the window to the next target.

Luke Wheeley
Now, to kill Luke Wheeley you need to proceed through the rooms after the window until you are in the barbershop. Pick up the barber disguise here and enter the next room. Here, there will be a couple of guys chatting near a pizza.

After the conversation, they will disperse, giving you the chance to turn on the gas for the oven. Next, go right from the oven and stay in this room. Luke will enter and walk past you (he can’t see past your disguise, don’t worry), and eventually he’ll stand near the oven. Shoot the oven to kill him.

Collecting Evidence: The first is a VHS tape, located within Streets of Hope, is located upstairs above the garage. And the second is a dossier, is located on the main floor of the barbershop.