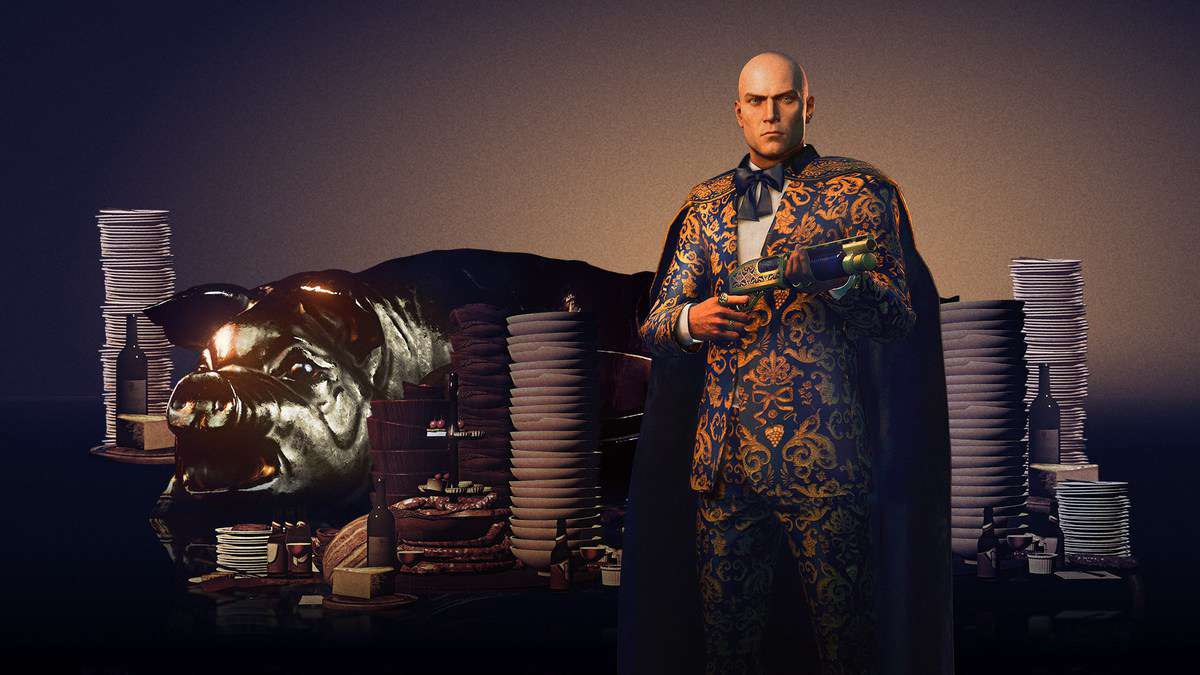 The escalation was added with Hitman’s 3 Season of Gluttony but expect the flavors of this event to offer a unique experience to the standard objectives and core Hitman gameplay.

The Pig is introduced in this Escalation as your boss of sorts. The golden statue of the gluttonous Pig will issue a Wishlist to Agent 47 with each consecutive level passed therein contain objectives and feats that you must accomplish in order to reap the best rewards.

Each Wishlist will ask you to collect food for the pig, as strange as it sounds, all you need to do is to kill or subdue an enemy in accordance to the enemy’s pig mask color and the weapon you choose to eliminate them with.

All of it will be explained later to make it less confusing for you and finally, completing most of the objectives will unlock some challenges related to the Escalation so it’s definitely worth your time!

Level 1 will give you a taste of what is expected of you in this Escalation. At first, a macabre cinematic will play where a voice emanating from the pig will debrief you of sorts asking you to take his wishlist and fill the belly of an unknown gourmand pig.

Without any comment, you will get to work, and the first order of business is to fetch, at least, 2 fish and 2 grapevines as an appetizer for the Pig.

Remember to grab a fish wire and grape knife before going on a killing spree for that, just go upstairs from where you have spawned to see the unmistakable statue of the eerie pig and grab the items from the counter near it. You can also change out of your suit, if need be, before heading outside to Chongqing.

Now to start, you can garotte the White Pig Mask NPC in the first building you spawn in but make sure to put away the body in a container first. If you get spotted, then say goodbye to your Silent Assassin rank. Be careful and silent to get that bonus XP and so, grab the firearm and your first fish off from the unfortunate NPC and head outside to the streets of Chongqing.

When outside turn to your left and head on straight till you hit a fork, turn to your first left and approach the apartment building. There will be a wooden ladder leading up to the high floors of the building, if you are surrounded by trucks then you are at the right apartment complex. Now just climb the ladder to the roof by using a drainpipe near you.

On top of this roof, you will spot an NPC with a Blue Pig Mask, its time to collect your grapes, Agent. Approach this man stealthily and take him out quickly with the grape knife without the nearby guard noticing your presence. You will receive an additional objective to feed the pig 3 pigs and they won’t be an issue for a seasoned killer.

At this point, move around the rooftop and walk past the walkways present. Be wary of a security camera looking at it, so move once the eye of the camera looks away from you.

Enter the building’s second floor by clambering through the bamboo scaffolding after which making a beeline to the end of the walkway till you spot a keypad. Approach and interact with the keypad and type in 2552 to get into the room.

Upon entering the room, takedown the researcher swiftly (non-lethal) after which taking out the mask-wearing NPC with your grape knife to attain your second grapevine. Once all is done, hide the bodies in a locker before heading back out.

Retrace your steps to the walkway and get across it, walking directly straight where you will spot two NPCs on a staircase that goes down below. Toss the fish at the unmasked NPC to knock him out before throwing the grape knife to dispose of the mask-wearing NPC before he gets the wind of things. Grab your 3rd grapevine and fish before moving on.

Now for your last piece of fish, head back down the apartment building from before. You need to find the fuse box on the bottom of the stairs so that you can tamper with it to distract the NPC in that room. Find the opportunity to knock him out so that you can kill the white pig mask-wearing NPC with the fish write for your last fish.

In finality, head back to the Golden Pig to get your rewards. Toss the fish and grapevines in the bucket at the statue’s feet to complete the level allowing you to exit and see your score.

For the main course, you need to feed the pig 2 fight and 4 meat bones. Mind the fact that you can’t get another disguise without risking the failure of your mission. Now, from the spawn point, grab everything on the table then head outside by taking the flight of stairs. A tip before you start, subdue and hide the woman right at the front to make the rest of your mission much easier.

Take a left and locate a container with a keypad on it. Use the code 0118 to gain entry. Check your map and you should be in the ICA facility under Chongqing, where you are going to hunt for meat. Remember that you need 4 pieces of meat so better get to it.

Move towards the server room and open the vent using the camera. Doing this will get you access to the room where two pig mask NPCs and 2 more guards are idling around- distract the leftmost guard by throwing a newspaper at him (that you can swipe from the closest tables) to knock him out. Afterward, kill the two pig mask NPCs in the room with the meat cleaver. Remember to grab the meat bones before exiting the room via the vent.

Don’t worry about the bodies since they are tucked away in an isolated room.

Now head to the main walkway from the ICA Facility entrance. Just ahead of the door, two guards are stationed so distract them with a meat bone, then kill the pig mask guard on the opposite side with the cleaver. Grab your meat bones and move onward.

After killing the two guards, head upstairs to the main entrance then wait at the doorway. The pig mask NPC is on the left. When he turns around, follow him a bit of the journey before executing him with the cleaver. Grab the last meat bone and hide the body in some barrels nearby before moving on to get your fish.

For the fish, move through the alley and out of the door- be swift because you need to catch up to a cluster of three pig mask guards patrolling together. This is the tricky part; you need to separate one from the group so just bump into the guard at the back to separate him and then create distance

Once there is a good distance between the rest of the guards, garotte them one at a time to collect your fish. Repeat this bump and garotte process till all of them are dead, hide the evidence in the nearby bins before picking up all of your fish.

Now you just need to feed the Pig and head for the exits to complete the last level.

The curtain on the dinner table closes with dessert, you need to feed the Gluttonous Pig 4 Bananas and 2 Grapevines. Grab the Machete, Grape knife and Bubble Queen gum from the area, why need the gum? Well, that can be explained later when you need it just make sure to keep it on you.

Now turn around and head downstairs then throw the Bubble Queen gum in the corner of the area to distract an NPC who, otherwise, maybe a thorn on your side later.

Wait alongside the container to the right and take care of the guard just around the corner, knocking him out before beelining to the shortcut door that will lead you to the lab.

Use the camera to unlock the vent and enter inside the ICA facility via the elevator shaft- remember to pick a screwdriver along the way.

Find a room in the facility that has a bunch of computers but most specifically the tier 2 dongle. You will need the tier 2 dongle to get to the lower parts of the Ica facility which can be located by the door on the right.

With the help of your camera, close the windows at the bottom as you are walking down the stairs to avoid being seen because you will need to move fast in order to attract a pig mask guard on the bottom. Throw the machete to this head to kill him thus picking up the banana before hiding his body under the staircase.

Now move into the room, past the stairs and come around to the left by opening the vent. Make sure to plan out your route before entering the vents by checking the maps.

Once inside the vent, exit down the shaft and turn left. Use the screwdriver, that we picked up earlier, to open the vent exit so that you can spot your next target.

Be careful as the extra NPCs may spot you when you attempt to kill the pig mask guard so plan it accordingly when killing the pig mask guard with your machete. Escape the room with the banana in hand and don’t forget to hide the body before moving on.

To the right of the area where you are is a control room and a security camera monitoring the corridor. Shoot at the camera to safely enter the control room after which using your camera to close the windows.

Head past the control room towards the fuse box, tamper with it to attract the attention of the pig mask guard who is stationed nearby. Hide before they come to investigate then bide your time till they fix the fuse box after which just finish them off with the machete. Grab your banana and hide the body in the closet.

Work quickly when heading for the vents in the next room, circle the guards and unlock the vent with your screwdriver before hopping in.

The vent will lead you to a room where another pig mask NPC is stationed, find the moment to kill them with your machete to grab your last banana. Close the windows with your camera and shift the body in such a way where you won’t be seen when dumping it in the locker.

Retrace your journey back through the vents then find a ladder that you can call down. This ladder will lead you to an area with two guards. Sneak past them to exit the area through the gates.

Remember how you got on top of the rooftops during Level 1? Well, take that path again and subdue on guard on top before the blue pig mask NPC for a grapevine.

The second pig mask guard will be near the second staircase on the rooftop so mind his presence before dispatching him, acquiring your second grapevine. It’s much easier if you grab a brick on the way to knock him out before throwing your knife at him, follow whichever method you find easiest.

Now all that is left is to feed the Pig its dessert to unlock the exits. Finish the Escalation to attain The Profligacy Suit, the Maximalist Shotgun and the Bubble Queen Gum sedative. Happy hunting Agents!