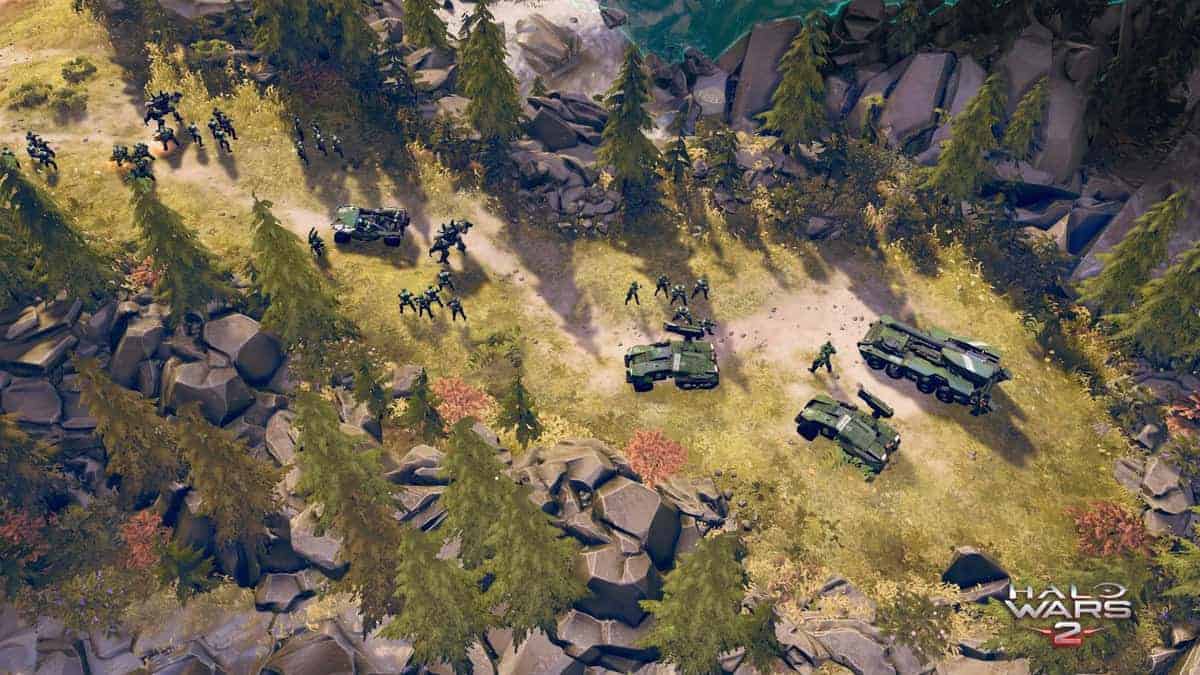 This Halo Wars 2 Combat Guide will help you learn everything you need to know about the game’s combat, game modes, and different strategies to win.

There is a lot to take in when it comes to Halo Wars 2 and being good at it, especially if you are new to RTS games. Having a firm understanding of how different units work in the game, countering opposing units, and how to snowball to victory are some of the things which separate good players from the average ones.

Whether you’re a hardcore RTS player or new to the genre, this guide should help you learn new things or refresh concepts that might have eluded you.

Understanding Counter-Units
Counter-Units i.e. the Banished Reaver, etc. tend to deal a massive amount of damage to Air Units despite being Ground Vehicles.

However, in order to prolong their survivability, you need to consider mixing them up with other units since Air Units can take them out if left alone.

It goes without saying that Halo Wars 2 Counter-Units are ineffective against all the units they don’t counter. Due to this, you should never consider building a squad solely based on Counter-Units; especially against a well-rounded squad.

Determining the Effectiveness of Units

There’s a color-coded system which allows you to determine a unit’s strengths and weaknesses against other units. Moreover, it also determines a unit’s effectiveness against buildings.

It’s a good idea to learn about these colors and choose battles which you know you can easily win. You can find an overview of these colors below:

Green
A green indicator means that a specific unit should easily win against the opposing unit. However, this isn’t the case 100% of the times since the color system doesn’t include special abilities at a unit’s disposal.

Yellow
A yellow indicator means that you should avoid engaging the opposing unit – if possible! If you, however, decide to engage, try to use all your abilities and micro-manage things to increase your efficiency.

Red
A red indicator means that you should avoid fighting the opposing units at all costs.

Grey
A gray indicator means that your units are incapable of engaging the opposing units. For example, there are units which can only heal and boost ally units and can’t fight.

Do note that upgrading units can change the effectiveness of a unit without altering the cost. However, this doesn’t hold true for units including Global Infantry, Air Units, and Vehicle Upgrades.

You increase a unit’s veterancy if you kill the enemy units without getting destroyed in return. You should be able to see a small icon above your unit whenever you gain veterancy.

Having increased veterancy allows your units to inflict increased amount of damage and have increased damage resistance. Here’s a brief summary of Veterancy Levels:

Halo Wars 2 units can acquire abilities through research. Unit Abilities in the game have a variety of different effects and can quickly turn the tables in a battle.

Unit Abilities don’t need additional resources, but each ability in the game has a specific cooldown which appears on top of a unit. You can also research global upgrades for all units. These upgrades are passive and affect all deployed and to-be-deployed units on the field.

You need Leader Points in order to get Leader Powers. With the sole exception of Strongholds, you start every match with 1 Leader Point.

As you continue to battle, research, build, and collect resources; you earn more Leader Points. If used at the appropriate time, the Leader Powers can quickly turn the odds in your favor even if you’re outmatched.

There is a total of 5 tiers of Leader Powers which vary depending upon the Halo Wars 2 Leaders. Within each of these tiers, you’ve both active and passive abilities.

There are four basic game modes in Halo Wars 2 which can be played against AI or other human players. This section of the guide provides an overview of all available game modes in the game.

Deathmatch
This is the standard RTS game mode which tasks you to defeat the opposing units on the map to taste victory.

Domination
In this game mode, you either need to destroy the opposing bases or capture the Control Points on the map and reach the maximum score limit to win the game mode.

Blitz
This is a card-based game mode which essentially plays like Halo Wars 2 Domination, but tasks players to build decks and go against other players.

I highly recommend choosing the leader who compliments your playstyle and what you bring to the field. You can also check out our Halo Wars 2 Leaders Guide for everything you need to learn about all the different leaders in the game.

When it comes to choosing an appropriate strategy, it goes without saying that rushing beats teching, turtling beats rushing, and teching beats turtling. In case you’re unfamiliar with these core concepts, I’ve provided a general overview of these tactics below:

Rushing
This Halo Wars 2 strategy basically involves building a large army based on Infantry Units and Scout Units as early as possible. I highly recommend using the Jackrabbit and Chopper which are some of the best rushing units available in the game.

Turtling
This Halo Wars 2 strategy basically involves building a few defensive units and having upgrading turrets on the map. Your basic job is to slowly expand your bases and fortifying them on the go. The more map control you have, the easier it will become to score a win.

Teching
With this strategy, you don’t really need to invest in defensive units and can freely spend your resources into researching and getting upgrades. However, do note that this strategy works really well if you have some teammates to back you up.