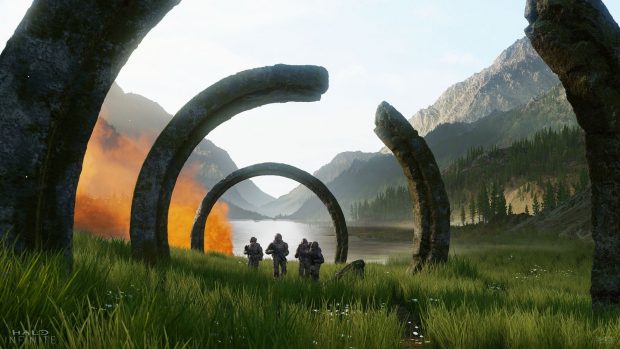 One of the most requested features for Halo 5 was split screen co-op but the feature is finally being implemented in Halo Infinite. During a Mixer Stream, Halo developer 343i confirmed 4-player split screen mode for Infinite. The game will allow couch multiplayer coop experience to its players. It is a trademark Halo feature that was missing from Halo 5.

Apart from the split screen, Halo Infinite will have Black Undersuits. By Black Undersuits they referred to all potions of the armor that aren’t made up of metal pieces. 343i assured fans that the art department is well aware of what the community wishes to see this time around.

But perhaps the most interesting assuring piece of information to come out of the stream is how they plan to treat the PC version of the game. Halo Infinite’s Splicespace Engine is created with PC in mind and PC version, according to 343i, “will be treated as a first-class citizen.” They noted that the Splicespcae Engine is not completely created from scratch and

Moving on, it was revealed that PC players who were able to reach level 152 in Halo 5 are going to get exclusive rewards in Infinite.

As far as Halo Infinite release date goes, players shouldn’t expect the game anytime before 2020. This means Halo Infinite is either exclusive to Xbox Scarlett aka Xbox Anaconda, or it is going to be a multi-gen game.

Current-gen hardware struggles to support 4-player co-op at higher resolutions which means we need better hardware. This begs the question, will Halo Infinite Split-screen support split screen on Xbox One and Xbox One X? We will have to wait and see.

Halo Infinite players will be able to explore a gigantic world full of rewards and explorations incentives. This is probably going to be the biggest Halo game to date.