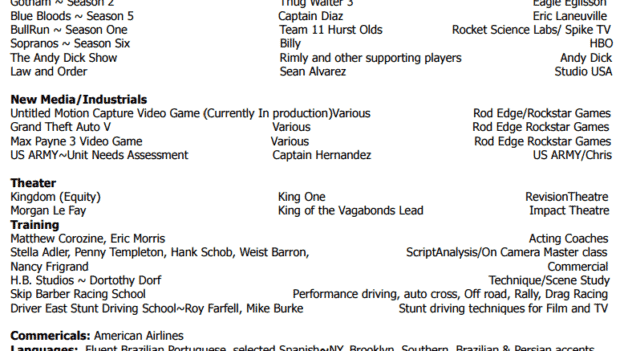 Grand Theft Auto V stuntman, Andre Da Silva, who did motion capture for the game appears to be back for Red Dead Redemption 2. He was also a part of Max Payne 3 and has long-term ties with Rockstar Games.

Andre Da Silva updated his resume and revealed that he is working on something for Rockstar Games. He is giving motion caption for a “currently in production” game for Rockstar.

Currently in production title is Red Dead Redemption 2 (unless it is a new game we don’t know about) so it is safe to say Da Silva is a part of the RDR2.

Da Silva isn’t the only one involved with Red Dead, actor Matt Bradford is also a part of the game. Matt did motion capture for Red Dead Redemption 2 but it is unclear if the process is complete or is he still involved. No doubt he is under NDA and won’t be able to discuss anything at this time so we won’t be bothering him.

Red Dead Redemption 2 is set for Fall 2017 release on PlayStation 4 and Xbox One. There are also rumors of a PC version and we find the mention of PC in Rockstar’s website but there wasn’t enough for us to report.

Red Dead Redemption 2 is expected to be at E3 2017 and Sony will most probably do the honors. A release date is also expected to be confirmed during Sony’s press conference in June.

Lots of Red Dead details and exciting gameplay videos are to be seen in the near future so keep it right here at Segmentnext.