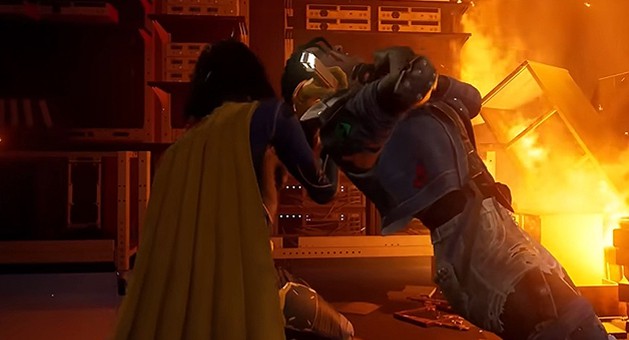 Every character in Gotham Knights has four skill trees in total, three of which are available from the start. You will need to farm as many experience points as possible from the get-go to level up and earn skill points to unlock new skills.

Skill points are, hence, precious in this regard. You need to be absolutely sure which skill to unlock because there is no way to respec your skill trees or skill points.

The following guide will tell you the best skills you should unlock first for each hero in Gotham Knights.

Batgirl is a character that balances herself as a tech specialist with the ability to tank enemies. She uses her hacking skills to shut down devices and enemies, creating chaos within the area.

You need to invest in her survival abilities so that she can stand a greater chance in fights. Once you invest in her Grit skill tree, she will be able to revive herself and fight for a longer time.

The best abilities to unlock first for Batgirl are below.

The first skill in the Grit Skill tree is HP Plus. This ability raises Batgirl’s base health by a staggering 40% to ensure that she can tank enemies at will.

Batgirl receives a defense bonus of 75 percent against counterattacks. This ability allows her to stay on the offense and not worry about getting hit back, as she will receive minor damage.

Batgirl can revive herself with 50 percent health after being killed in a fight, making this one of the most survival skills to unlock in Gotham Knights.

Batgirl stealth plays get boosted due to this ability. She can pass through different sensors or cameras without getting detected, even if you did not hack the cameras. If the devices are not in your range of hacking, you could simply use this ability to make your sneaky plays on the enemies.

Robin primarily relies on his stealth strength, so our main focus should be on his Shadow tree. However, you still need to equip other skills, as stealth cannot always work, and it is tough to fight against bosses without having the right balance of abilities.

The best abilities to unlock first for Robin are below.

This is one of the best skills associated with the Robin character. This skill allows him to eliminate large enemies stealthily. You can stop them without even letting others notice.

Moreover, if you fight multiple enemies, use this ability to take one target down, then repeat the process using your stealth items such as decoys or smoke bombs.

Robin is the only one to acquire this skill in Gotham Knights. He can hang the enemies from vantage points, creating attraction for other enemies to come, which means you can quickly gather them in a single place and then use your area damage to affect all the present enemies.

Robin creates temporary mines by sticking pellets on surfaces. The mines will damage the enemies once they come in contact, and you can substantially use this skill to harm the group of enemies.

Red Hood’s strength is his long-ranged attacks and his specialty in crowd control. He can inflict massive damage on enemies if they come close enough for him to use his grab skills.

It is vital to unlock his grab skills early in the game, as the possibility of facing enemies from a long range is not high. So it would help if you worked on his Brawler and Marksman tree as soon as possible.

The best abilities to unlock first for Red Hood are below.

Red Hood can deal four times more damage to his enemies using focused fire. Due to this skill, you can aim for a more extended time to deal maximum damage and pick up the enemies individually.

If you use this skill simultaneously with long-range attacks, your every round will deal up to 5 times more damage to the enemies. Moreover, this skill also goes with the Precision aim, and this skill strength makes it a must-have one.

These skills provide Robin Hood with the ability to grab giant enemies. This makes it easy for him to take down the large enemies and eliminate them before they even inflict any damage on you.

If you grab an enemy, this skill will help you get a little breather during the fights. This is possible because others cannot interrupt you quickly due to your Iron Grip skill. This skill provides you both the ability of offensive as well as defense.

Nightwing’s primary strength lies in his mobility as he moves from one enemy to another, creating havoc for them. Additionally, he has astonishing crowd control, and no one can tackle his attacks from the air due to his never standing posture. It is crucial to unlock his skills from the Acrobat and Raptor skill trees.

The best abilities to unlock first for Nightwing are below.

As the name suggests, Nightwing can combine this ability after using Trampoline. This will make him perform three connected bounces on the enemies and make him move swiftly between different enemies and not get caught.

Nightwing must maintain the momentum that he generates through his mobility. Due to this skill, he will get an extra Momentum bar that he can use to save his momentum. It is essential to understand that these points are used for the momentum abilities.

This ability will work with extra momentum; this provides Nightwing with the skill to execute extra doges. These different dodges will help him in gaining more momentum.

This skill empowers the Evade Chain attacks of the Night wing by adding AoE damage to this combo. The combo includes the evade chain attack by Nightwing, followed by a knockdown attack that will hit all the enemies surrounding him. This means you can easily crowd-control and get away from challenging situations.