Get to Know Kalimos, the New Shaman Legendary Card for Hearthstone 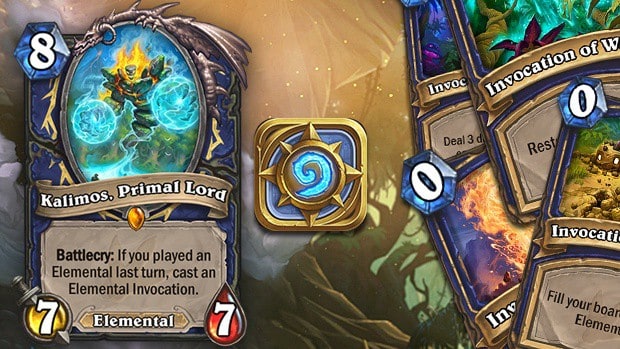 In a series of reveals, Blizzard has brought our attention to a new legendary card incoming for the Shaman class of Hearthstone.

Kalimos, Primal Lord, is an Elemental minion that can be played at the cost of 8 mana. It boasts an impressive 7/7 attack/defense and comes with a Battlecry that allows the player to select one of four tokens.

An Elemental Invocation can only be cast if the player played an Elemental in the last turn. Thankfully, there is no Hearthstone RNG aspect involved with the new legendary card. The player will be shown all four tokens, and any one can be played depending on the situation at hand.

Kalimos is a master of the building blocks of all life on Azeroth, or as they are more commonly referred to as, the Elements. Shamanic cultures have long sought to live in harmony with, or assert dominion over, these forces, and Kalimos is a prime example of these traits.

Journey to Un’Goro is the upcoming new expansion pack for Hearthstone and is penned for release early next month. According to an Amazon listing, the expansion is scheduled to release in the first week of April. Blizzard is yet to confirm the release date.

Over a week ago, the developer announced that it would be increasing the pricing of Hearthstone purchases for Europe later this month. However, the increased pricing will not affect the pre-orders of Journey to Un’Goro. It should be noted that once the expansion is released, its pricing will be updated in the store to reflect the new changes.