Gears of War 4 Coming to PC? Version Listed in UK 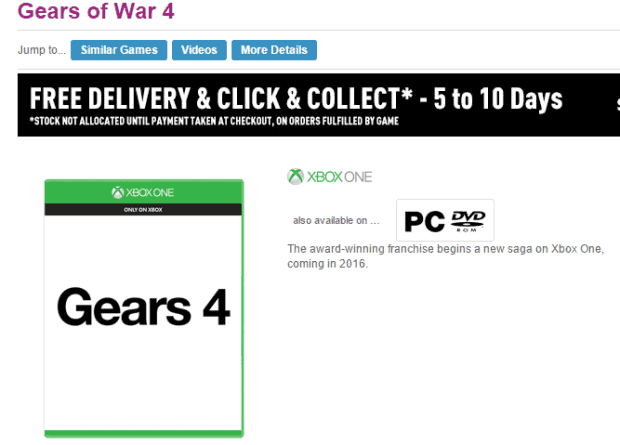 The original Gears of War was on PC but later on, Microsoft decided to make it a Xbox exclusive. Naturally fans weren’t happy about this and to this day they are highly displeased.

Microsoft now owns the franchise and is working on the fourth installment of the game. Once again, this entry is being made exclusively for Microsoft’s Xbox platform.

However, The Ultimate Edition released recently was also made available on PC, which gave rise to the speculation of Gears of War 4 heading to PC.

We don’t know what Microsoft actually thinks about Gears of War 4 on PC, but it looks like GAME is pretty sure they will release it on this platform.

Either this, or the mods of thier website are drunk at the moment.

As you can see, the PC version is listed as well.

Sadly, judging from recent issues GAME has faced with its website, I don’t think of it as anything other thanc a mistake or a bug in their webpage.

But of course, I could be wrong and this may be an actual leak that has provided us probably the biggest news of the year.

Unfortunately, we can’t say for sure what it is.

Until an official statement comes, feel free to discuss and geek-out in the comments.