Gears of War 3 – All The New Features 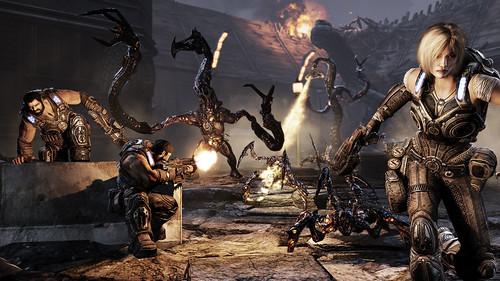 Story is Bigger and More Engaging
The story will follow two teams. The first has Dom, Marcus, Anya and a newbie Jace whereas the second team will be led by Cole and Baird. The story will see them investigating loose ends left by Marcus’s father and get involved in the escalating war between locust horde and the mutated Lambent Locusts.

Gears of War 3 Features Earth’s Sunny and Tropical Climate
The game will feature stunning sunny and tropical climates. The warm and natural greens will replace the blue and grey pallets. All this comes with Epic’s technological advancements in Unreal Engine so it’s bound to be visually stunning.

Play as Horde
Everyone’s favorite co op Horde mode will return in Gears of War 3 and now you will be able to play as Horde.

New Multiplayer Modes
The old Guardian and Submission modes featured in Gears of War 2 have been smashed together to make the new Capture the Leader mode. In this new mode both teams will have an invincible leader captain which must be taken as hostage for 30 seconds to win the round.

King of the Hill has been merged with Annex to make the new King of the Hill mode with mobile hills and spawn points. Warzone and Execution are joined together by a first-to-20-points-rapid-respawn Team Death Match mode for those who didn’t understand the staggering complexity of execution mode.

4 Player Co Op – Mark Enemies and Set WayPoints – Auto Host Selection
When you finish the game your party will stick together, much like Halo. If your host gets disconnected, your game picks a new host without any disconnections. You can mark enemies much like Battlefield, designating targets for snipers and setting waypoints. 4-player co op.

New Level up System
Gears of War 3 features a level up system which works like any other multiplayer game. You earn XP and get rewarded with weapon unlocks and other cosmetic bonuses.

Innovative Multiplayer Features
Characters move quicker; guns are more balanced and have unique roles. In multiplayer every match begins with an overview of the map, marking weapon locations and important tactical positions. The idea is similar to the one already implemented in Battlefield Bad Company 2: Vietnam.