There are certain stories in the gaming community that become legend, and the story of JediRabbit may be one of them. How many times can you send a PlayStation 4 back to the retailer before you realise maybe you are the problem?

This story has been reported by Crave and is the story of one PlayStation Forum user who appears to find any slight problem with his PlayStation 4 and make a huge issue out of it, even down to the level of noise from the system fan.

While this may seem fairly reasonable that the person may have found this an issue, it appears that JediRabbit has made 1,829 posts to the PlayStation Forum all about problems he continues to have with his consoles. We say consoles, because he keeps on sending them back.

It appears that he is becoming well known for his issues, as is revealed in the below conversation: 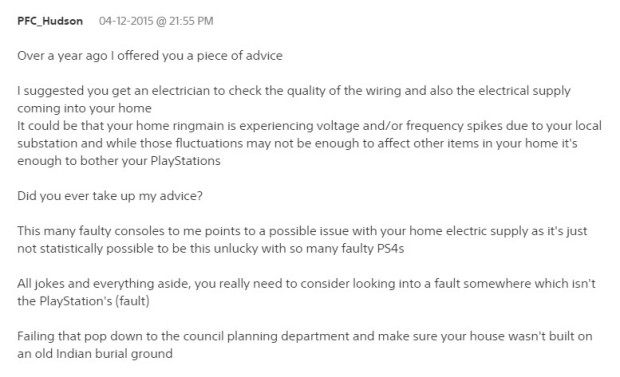 If this situation is truly real, and not the best troll ever then you do have to have pity for this person. We may think that he needs to calm down and stop going crazy about every little issue he finds, but then again when he pays so much for a system does he not deserve some support for this problems?

I’m sure JediRabbit is still out there playing his PlayStation 4, and he hopefully is not having issues tonight. If not, he’ll probably be writing a post of the forum right now.

What are your thoughts on the plight of JediRabbit and his broken consoles? Let us know in the comments section below.