From Dust, A Nature Simulator Let’s You Play god 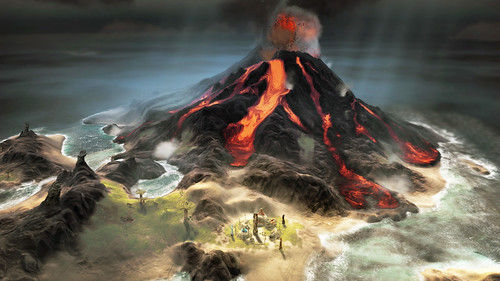 From Dust is realistic nature simulator from Ubisoft in which you play the role of a god. It will be released exclusively for PSN, XBLA and Steam in Summer 2011.

The main star of the game is Nature itself and the world which evolves because of it own rules. A world in which humans can influence but cannot control. A world where natural disaster such as tsunami, earthquake and volcanic eruptions occur.

A world where flaura and fauna quickly populate the land in mere minutes. A world which has been in pre production for more then 2 years. The world of From Dust is very much familiar but strangely beautiful.

The key visual inspiration for creating the impressive world of dust was our own world and research on the Dunes of Central Sahara and the Lagoon Archpalego of Polynesia. In order to populate the world of From Dust developers researched real tribes from Africa and mixed the exotic influence into the world of From Dust.

The people of From Dust wear masks from birth to death. These are very powerful visual symbols in the world. A world which is exotically beautiful but dangerous.

In a recent interview at GDC 2011 Eric Chahi the creative director of From Dust emphasized how nature is the main actor of the game and you are the only one who can help the inhabitants of From Dust.

He describes that when you first start the game, you will meet the lost tribe who has lost their memories and their paths for which they quest to recover. In the game players can manipulate water, sand, lava, make vegetation grow and have special powers such as freezing the water.

It would be interesting to see how this game performs but to get an idea of the visuals and what I have been talking about, watch From Dust Dev Diary #2 below.