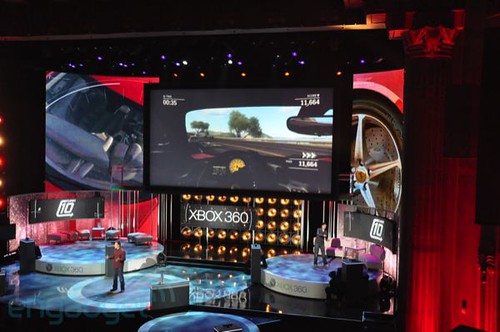 Kinect has been so much successful that it might have even surprised Microsoft itself. In fact, Microsoft has every right to implement its support on every game, since the clever gadget has really changed the way Xbox 360 will be played. We saw a good demonstration of what Kinect holds for the future during E3 2011, with all the unique features it will be bringing to different games.

Of the many games that were oh-so-impressive, Forza Motorsports 4 was probably one of the most unique. What’s so special about this racing sim you say? Well, read on to find out some of the amazing features which will possibly be redefining racing games altogether.

It’s not about controlling your car without a controller in your hand – that would just be silly. It’s about combining the use of both the controller and Kinect to get a whole new experience. The AutoVista mode featured really elaborates and shows off some of the impressive features of this game.

You can use Kinect to walk around and examine cars detailed down to the wire. The details of the cars are mind-blowing – even the disc brakes on the front wheels have reflect dynamic lighting.

You can walk around the car, open its doors, hood, and every other thing that can be opened, sit inside, and have a look at the dashboard from every corner. You can even start up the engine by inserting your automotive key to hear the engine roar.

The way the cars can be displayed is called the ‘sub-six-inch’ perspective. This means you won’t see jagged edges or blockiness when you zoom into different parts of the car. Sadly, there are only a selected number of cars that can be viewed in the AutoVista mode.

However, the amounts that you see are mind-blowing, and the fact that they have descriptions voiced by Top Gear’s Jeremy Clarkson just adds to the flavor. The voice-overs are not for the whole car in general; they are for different individual parts of the car marked as points of interests.

Even more interesting is that the voicing is unedited, so Jeremy doesn’t hold back anything bad he has to say about a certain model or its predecessors.

You can also use voice-input to get you from one menu option to the other, and the recognition is very accurate, so you don’t need to be very precise with your pronunciation or tone.

When it comes to using Kinect for racing, it seems its best to use both the controller and Kinect features combined. Using Kinect to move or brake seems like doing magic with your bare hands. However, we’re not sure of how well or how comfortable it is handling with Kinect.

If you though the driver’s view of Shift 2 was spectacular, you won’t be disappointed with Forza’s. The cockpit view is amazing, and the detailed dashboard, steering wheel and gauges really add to the experience.

Of course, the outside world looks just as good, with the opponent cars equally detailed as yours, and the shimmering dynamic lightings brushing the clean asphalted road, making it shine in a lustrous manner.

So to sum it up, Forza Motorsports 4 is looking amazing, and with the usage of Kinect and some brilliant mechanics, we’re confident that it won’t be just another ordinary racing sim; instead, it would probably be a very new and amazing experience.

Having Kinect isn’t compulsory for the game, but you’ll be missing a great many things if you don’t have one.