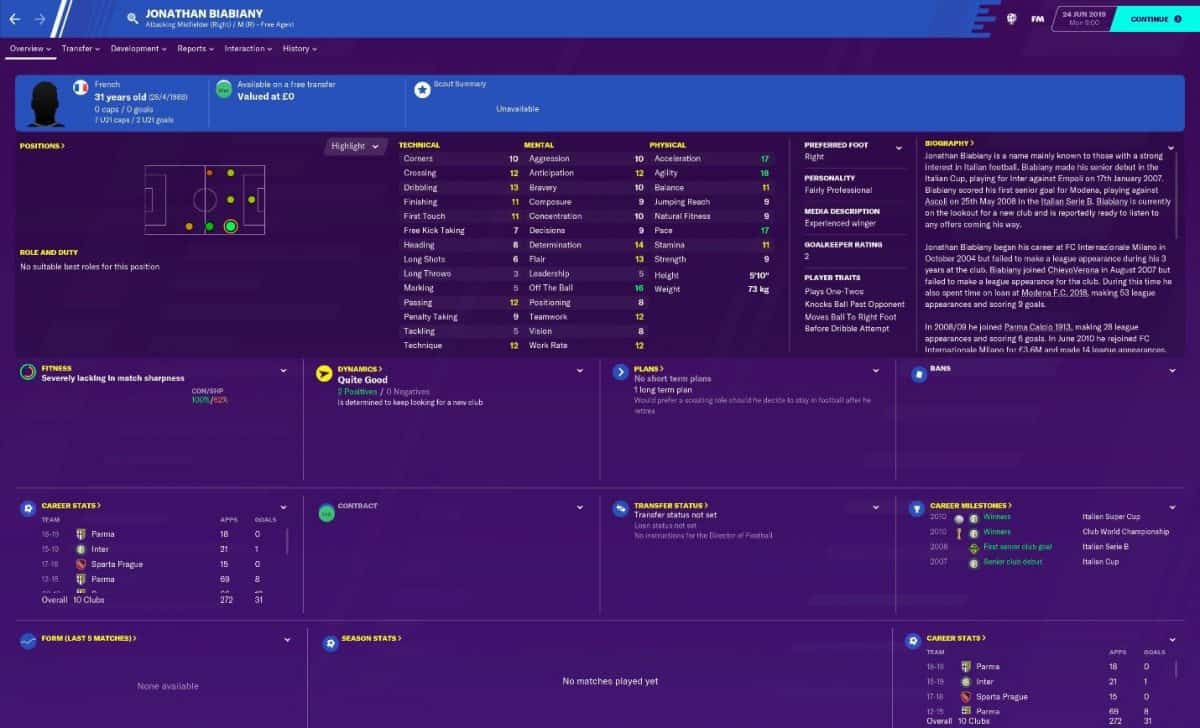 Free Agents, in simpler terms, are free players that do not have affiliations with any club or have no signings or contracts. These players are extremely important in Football Manager 2020. You can get players from backup keepers to elite defenders, and, the best part, it won’t cost you. So without any further wait, let’s proceed with our list of Football Manager 2020 Best Free Agents.

So here is a list of the players, rating–wise, you could get for almost free or next to nothing compared to the A-Listers in football, especially helpful in the lower leagues, you can train them to bring out their best.

So load up your transfer season with the best Free agents available in the game. Each and every player mentioned may not be available in your current save game. So to get your club off to a good start, without spending a lot take these players for a spin.

These kinds of players mostly are in the twilight of their years, with age dampening their skills, but according to the 2020 manager they still pack a nice punch with rating ranging from 70-80, these will make great additions to your club.

Wilfried Bony(CF)
Unlike many others in the free Agents gallery, this guys is pretty young at only 30. And thus not a lot of his skills have deteriorated, he still has top stats for a traditional center-forward, with Strength and Composure both seeing ‘green’, while his Technique, Finishing, Heading and Balance are also moderately good. If Manchester City could consider him against Sergio Aguero, so should you.

Adam Bogdan (GK)
He is a former Liverpool and Bolton player, could make for a good substitute keeper for your team. At a push (training him), he could probably do well between the goal posts for some Championship sides.

Fabio Coentrao (LB)
Fabio Coentrao could fit in at the left back position in most major European leagues. One of the best Free agents you can get. He has exceptional wing back attributes, with 15 Crossing and Dribbling being the highlights.

Lucas Silva
Lucas Silva is the odd one out for this list, he is a 26 year old and boasts some stellar stats. The reason he is available like this may be because of his poor physicals, however a lot of clubs would be after him and you must be quick to sign him up.

Keisuke Honda (CAM)
At 33, this Center-attack-mid, player is still in prime form to take down opposing team defenses. His high Natural Fitness and Stamina means he should be able to fit in as a regular in your side, and not only be a substitute

Riccardo Montolivo
This The 66-time Italy international may be a veteran of the game, and is pretty much in the final stages of his career but from a purely Technical and Mental perspective, the Milano still has plenty to offer.

It is these skills that enable him to overcome his lack of stamina and physicals. He can be further polished through training, and could prove to be a great addition to your mid.

Jonathan Biabiany
At 31, he has great traits for Acceleration, Agility and Pace, the Parisian still offers an exceptional threat from the flanks. His end finishing may need some training to get right, but for a short-term solution, Biabiany certainly is a fine addition to your squad.

Hatem Ben Arfa
Renowned for his technical brilliance and elite-level end product, the 32-year-old was directly involved in 15 goals for Rennes across 2018/19 (nine goals, six assists), making him one of the best free agents available this year.

He was a key part in his previous club but fortunately for you, he has left it and is not attached to any clubs at the moment, so grab him up and on his better days, he will be great in your forward positions.