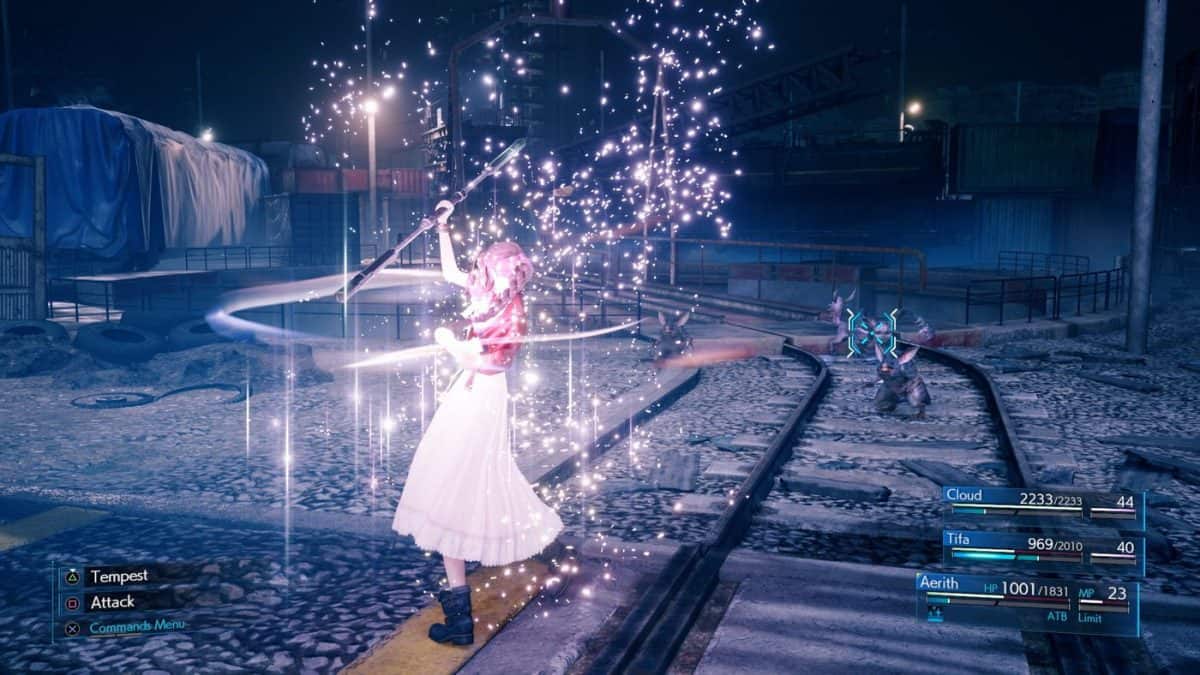 Are the enemies too much to handle in the FF7 remake version? You just can’t secure the win in some battles? In this guide, we will give you some handy Final Fantasy 7 Remake Combat Tips to ensure your victory in every fight.

Below are some tips we have compiled regarding different aspects of the FF7 Remake combat system, explaining more areas of the combat, HUD and gameplay.

Stagger Bar
Final Fantasy 13 players will be well aware of the stagger system and in this remade version this system will be your most important friends! The stagger bar on the top corner of your screen is the measure of your enemy’s focus and composure.

So your strategy is to stagger your enemies so that they become vulnerable to all the offensive moves! When the battle starts, start damaging your enemy with the focus of depleting their focus and composure in the battle.

When the bar fills up, your enemy goes into a staggered stage, and this is your golden chance to put all your effort in to win the battle. Learning the staggere system to win a battle is really important so learn what moves stagger the enemies!

Furthermore, you can deal bonus damage to some enemies when they are in staggered state so that’s a plus too.

Also, keep an eye on the Pressure-bar just below the stagger bar as some enemies are more open to attacks in this stage which further triggers the stagger stage.

Block the Attacks
Unlike the former Final Fantasy titles in which you could just focus on attacking and didn’t have to worry about your own health, things are different here and blocking attacks is as important as attacking itself.

Your healing is now restricted by MP! But what you must know is that blocking attacks also fills up your ATB bar which when filled up can be used to carry out special attacks.

So blocking the attacks in the real-time battle system FF7 Remake has to offer is an absolute necessity! The steadfast block materia reduces the damage taken and also fills up the ATB gauge which you can use to carry out even more effective attacks.

Carry out Extensive Assessments
Assess materia is vital to a lot of things! First of all, obtain it from Chadley by completing the quest given by him in chapter 3 and then use then it to your absolute advantage. Use this amazing materia on absolutely everything as it will reveal everything you need to know about your enemy!

The tiniest details the materia gives you about your enemy will always give you a competitive advantage so always use it.

Asses materia will be used in lots of Chadley’s missions too which when completed will reward you off with more powerful materias. Using this materia will help you assess the possible elemental damage you can cause to your enemy even the toughest bosses!

The Assess materia will reveal enemy’s weaknesses which in turn will help you stagger them off more effectively.

Your allies should have access to at least one of the spells of each of core elements including Fire, Ice, Lightning and Wind.

Using the right spell at the right time can put your enemy in the pressured state or even stop them from carrying out a devastating attack.

You can also use the elemental materia to blend it with your armor or weapons for a devastating damage dealing move!

So when you are in the end stages of the battle, using the right elemental materia can be a decisive moment and will decide if you win or lose.

Too much to Manage?
The real time battle system surely makes it difficult to blend in strategy, thinking and action together.

Enable classic mode in FF7 Remake as it will focus on execution of your strategy while you plan your next move.

The automated system will carry out the moment to moment action while you focus on HP and MP management and so on. So in case you don’t want to smash your keyboard al the time, use the classic mode.

Switch down to easier mode as it will surely make things a lot easier! The battles will be less intense and you will be able to plan and execute your moves timely.