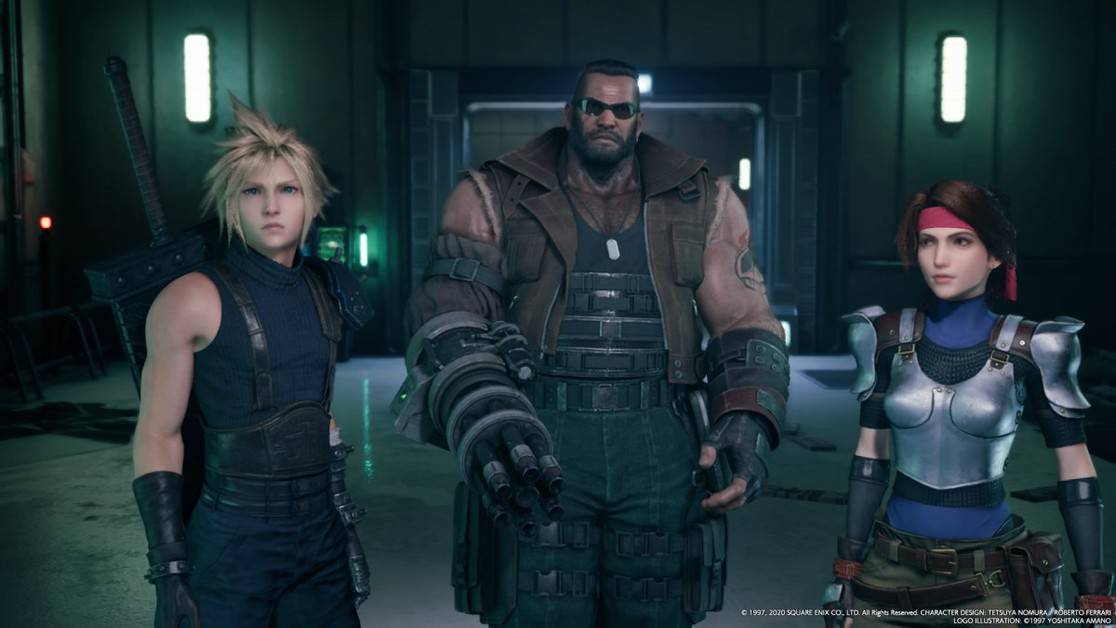 In this guide, we will list all the Characters you will encounter in FF7 Remake and help you get an overview of the rich cast of characters of this classic JRPG.

Cloud Strife
Cloud is the main protagonist in Final Fantasy 7 Remake and also the main playable character in the game.

His weapon is the well-known Broadsword with his ability being able to switch to different attack styles with his sword.

Cross-Slash
Paralyze the opponent who is attacked. Available from the start.

Ascension
Deal 4x the normal attack damage to one opponent.

Barret Wallace
Barret is the first other playable character you meet in FF7 Remake. He is the leader of the Avalanche.

Barret will join Cloud’s party during the ‘Breach Security’ mission in the first chapter. Barret has a Gun-arm which he uses during combat.

Fire in the Hole
Barret can cause a lot of damage with an explosion by throwing an orb of energy. This is unlocked from the start.

You first meet her during the ‘Home Sweet Slum’ mission in Chapter 3, where she will join Cloud’s party. She joined Avalanche to get revenge on Shinra who destroyed her hometown where she grew up.

Tifa is a brawler who will use Knuckles during combat. Tifa is very agile which allows her to deal fast combos to enemies.

In FF7 Remake, Tifa’s limit break mechanism works in a different way compared to other characters. Tifa cycles through her limit breaks in turn with the effective damage based on the active slots which are randomized.

Somersault
Unlocked from the start to deal a high damage kick to the enemy.

Aerith Gainsborough
Aerith Gainsborough is a playable character in FF7 who is a flower seller by profession. However, she is being hunted by Shinra people as she is the last Cestra in existence who can communicate with the planet.

She will join Cloud’s party for the first time in the ‘Budding Bodyguards’ quest during Chapter 8. Aerith is the support character and healer of the party and uses ranged spells and projectiles to fight off enemies.

Healing Wind
Restore HP of all party. Unlocked by default.

Planet’s Protection
Grants shield to allies for 80s to nullify all physical damage.

Red XIII
Red XIII also known as Nanaki, makes a guest appearance as a playable character in FF7 Remake. You will meet him during the infiltration of Shinra corporation.

Biggs
Biggs is a supporting character who is part of the Avalanche. He is a non-playable character that appears in several cutscenes and missions throughout the story.

Biggs is the strategist of Avalanche team and very good friends with Wedge and Jessie, the other members of the Avalanche.

Wedge
Wedge is a supporting character who is part of the Avalanche. He is a non-playable character that appears in several cutscenes and missions throughout the story.

Wedge is the recon expert of Avalanche who gathers information through his charming personality and contacts.

He is a big fan of Cloud.

Jessie Rasberry
Jessie is a supporting character who is part of the Avalanche. She is a non-playable character that appears in several cutscenes and missions throughout the story.

Jessie is the tech expert of the team and is good with explosives and other items used during their missions.

Jessie becomes a big admirer of Cloud after meeting him and often flirts with him.

He has three children known, one of who is Rufus Shinra. He is an unplayable character and appears in some cutscenes.

Rufus Shinra
Rufus Shinra is the Vice President of Shinra Electric Power Company and a minor character in FF7 Remake.

He is an unplayable character and appears in some cutscenes.

Heidegger
Heidegger is a member of the Shinra clan who has the role of Head of Public Safety in Shinra Electric Power Company.

He will appear in some missions and cutscene during the story. He is an unplayable character.

Scarlet
Scarlet is an antagonist in FF7 remake who works as the Head of Weapons Development in the Shinra Electric Power Company.

She is an unplayable and minor character and will be seen working with Heidegger during the cutscenes and missions.

Professor Hojo
Professor Hojo is a secondary antagonist in FF7 Remake who is the head of Science Research Division in the Shinra Electric Power Company.

He is an unplayable character and the main mastermind behind SOLDIER and the Jenova Project.

Palmer
Palmer is a minor character in FF7 Remake who is seen just a few times in the cutscenes during missions.

He is the head of failed Space Program of Shinra Power company.

Reeve Tuesti
Reeve Tuersti is a minor and non-playable character in FF7 Remake who has a few appearances during missions.

He is the head of Urban development of Shinra power company.

Roche
Roche is a minor, non-playable character in FF7 Remake. He is a renegade SOLDIER who you will fight against during some missions in the story.

Reno
Reno is a boss battle character in FF7 Remake. You will have to defeat him during a boss fight in the story.

Rude
Rude is a minor support character in FF7 remake who you will have to fight during the story mission.

Tseng
Tseng is a supporting character in FF7 Remake and is the head of the Turks.

He will kidnap Aerith during the story and you will have to rescue her from the Shinra building.

Zack Flair
Zack Flair is a minor supporting character in FF7 Remake who appears in a cutscene at the end part of the story.

Sephiroth
Sephiroth is the main Antagonist of FF7 Remake. He is the final boss of the FF7 Remake story.

He is one of the most lauded SOLDIERs of the Shinra Electric Power Plant Company. But when he learns his true origins, he goes crazy and hell bent on destroying the World.