Final Fantasy 7 Remake Chapter 16: The Belly of the Beast Walkthrough 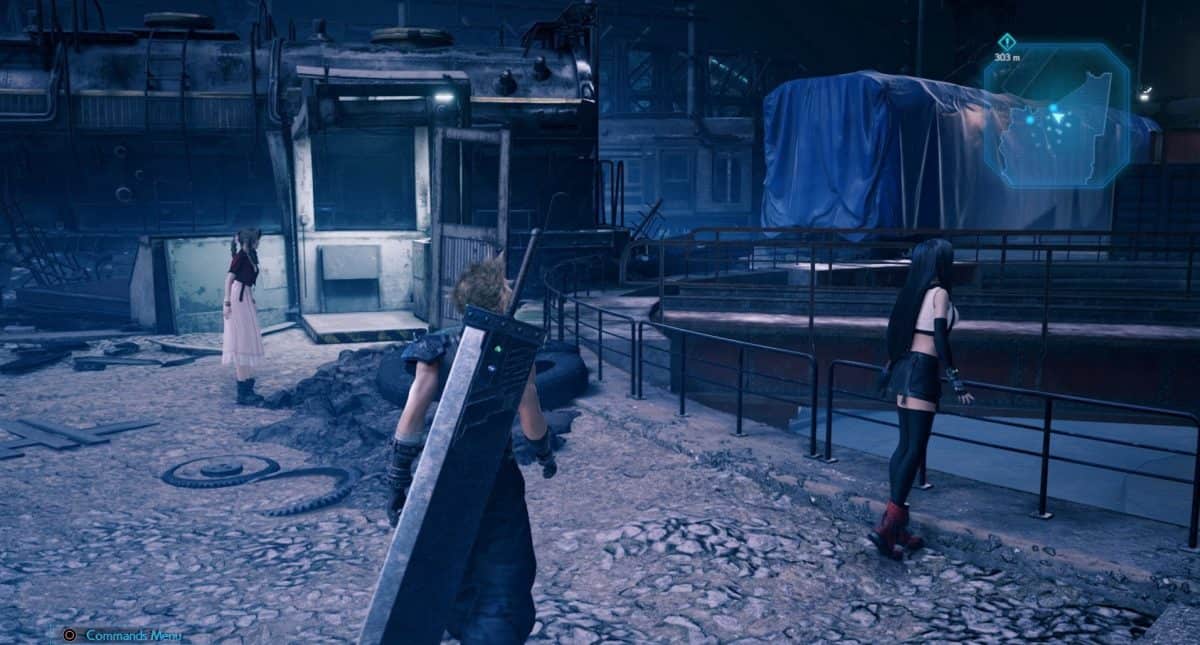 Final Fantasy 7 Remake Chapter 16: The Belly of the Beast

This mission begins with the objective of infiltrating the Shinra Building. Make your way down all the stairs and ladders and break all the Shinra boxes in your way.

Halfway down, you’ll find a chest with a couple of Hi-Potions and you’ll see a vending machine ahead of you.

Restore your health there and then walk back the continue moving down the stairs to your right. Walk across the bridge and a cutscene will trigger, showing you and your squad jumped on top of a truck and made your way to the parking garage.

Unfortunately, Barret will fall off this truck and you’ll have to fight the elite security officers at this checkpost.

Bust Out of the Garage
Now, make your way through this parking garage and go through Gate-01. Take care of the elite guards and soldier operatives here and move through Gate-02.

Here, you’ll fight even more elite security officers and a trio of guard dogs. Make sure to grab the Molotov Cocktail from the chest here.

Go under the door and clean up the guards in this area. Get the 2 Mega-Potions from the chest in the North-East corner of the room.

Exit the garage and go up the escalator to get to the entrance of the Shinra Building.

Shinra Building Intel
Get the Moogle Medal from the chest next to the plants in the South-West corner of the entrance area and head to the reception.

From there, go up the stairs and try to open the door in front of the reception.

This door needs a keycard to be opened which is inside the reception. Make your way towards the reception by hopping on the platforms.

You’re scripted to fall before you reach the reception, so you’ll have to use the other platforms/ramps to get there.

Before you do that, loot the chest in the tiny corridor present in the Eastern section of this area to get yourself 2000 Gil.

After that, jump on top of the car (adjacent to the bike) in the center of this area and hop on the little platforms to get to the ladder. Climb up the ladder and use the monkey-bars (follow the arrows on the platform) to get to the second ladder.

You’ll now reach the same platforms you hopped on before but this time you’ll successfully get to the reception.

Reach for the Skyview Hall
Make your way up the stairs and go through the gates using your newly obtained keycard. Get to the elevator and it’ll bring you to the Skyview Hall. Though you’ll be attacked by some guards on floor 10 and 20 but they’ll be very easy to take care of.

Playing the Tourist
Update your keycard from the holographic receptionist and go through the door, then use the elevator to get to the floor 60.

There isn’t anything important in this floor so quickly make your way up to floor 61, which is the Visual Entertainment Hall. After a series of long cutscenes, you’ll reach floor 62.

A Helping Hand
Go into the room the man leads you to and another cutscene will start, where you meet up with the ‘Mayor’.

After the chat with him, exit this room and get 3,000 Gil from the chest to the left and then talk to Hart. If you pay him 10,000 Gil, you’ll obtain some useful information about the person you need to get to and he’ll also give you an EKG Cannon.

Head down to the ground floor and exit the library. Go up to floor 63 and go to the dining area.

Talk to the guy outside the combat simulator (on the second floor of the dining area) and then enter it. After defeating the robot, talk to the guy again and you’ll get the updated keycard.

You’ll be notified of some new challenges that have become available in the simulator, which you can only attempt right now. You can either do these right now or play the chapter again later and finish them.

Get “Scarlet’s Theme” from the jukebox to the right of the entrance to the simulator rest on the bench to restore HP and MP. Go back down to the first floor of the dining area and go through the door next to the cafeteria.

Move forward and go through another door to trigger a cutscene. After it finished, go up the elevator to floor 64.

Reconnaissance
Head into the bathroom the guy outside the combat simulator told you about and jump into the air ducts.

Move forward, take a right, a left, a right, another right and then a final left to get to the conference room. After a cutscene, you’ll return back to the bathroom.

Operation: Save Aerith
Exit the bathroom and make your way to the elevator room to trigger a cutscene with Hojo.

Follow Hojo up the stairs and he’ll lead you to your first boss fight of this chapter.

Specimen H01512 Boss Fight
The best strategy to use in this fight is to attack the H01512 from behind. He will spawn some little minions throughout the fight so make sure to kill them as they come so they don’t stack up.

The H01512 is very bulky so his attack animations aren’t that fast. Carefully watch his movements and you’ll be able to tell when he’s about to perform an attack.

After the fight ends, restore your HP and MP using the bench and go up the elevator to floor 66. Here, you’ll have to fight a team of six elite security guards.

After cleaning them up and freeing Aerith, two Armored Shock Troopers will show up. This armor is vulnerable to lightning damage and the troopers will eject out of it after you inflict a certain amount of damage to the armor.

The armor will then blow up, dealing damage to you or your allies if they’re too close to it.

Once you eliminate these troopers, follow Aerith and once the cutscene ends, walk towards the end of this corridor to complete Final Fantasy 7 Remake Chapter 16 – The Belly of the Beast.