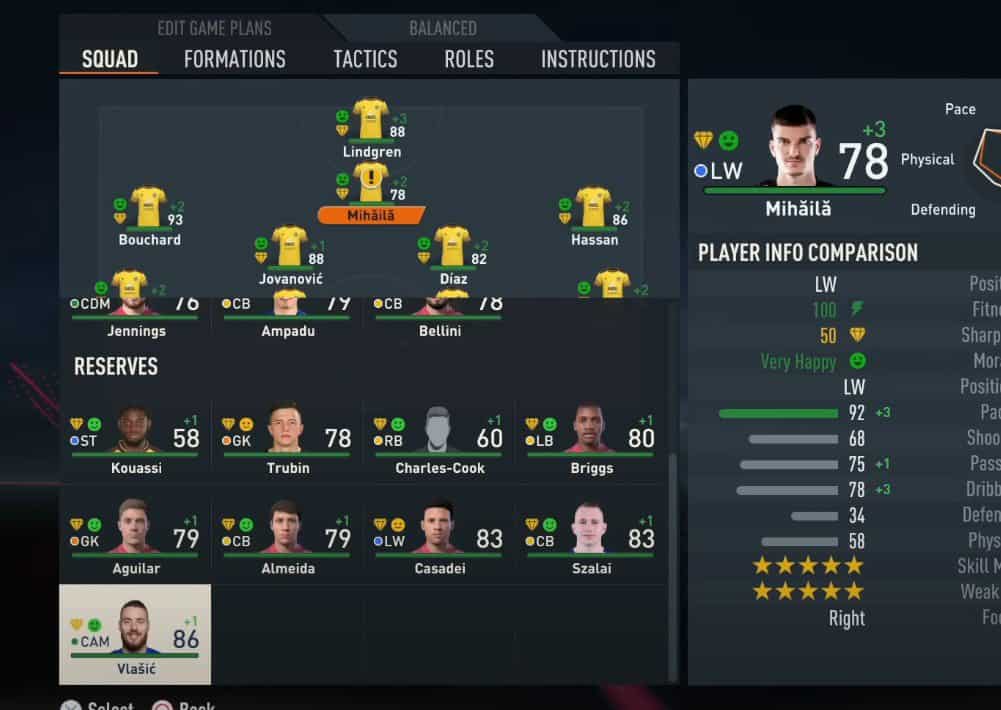 While you might be able to afford the most expensive players if you have the resources for it, sometimes it is best to look into Free Agents when making your squad in FIFA 23 Career Mode. These free agents recently had their contracts expire or it is about to, making them extremely cheap yet reliable players.

In this guide, we will present you with some of the best free agents in FIFA 23 career mode that you should consider hiring.

Free Agents in FIFA 23 Career Mode help you a great deal if you choose the right ones because they pack some good skills on top of being budget-friendly as well.

Here are the top five Free Agents available in FIFA 23 Career Mode. These Free Agents’ qualities make them seem like a steal for the money they come for.

Juan Mata excels at controlling the midfield, coordinating attacks, and breaking through defenses. Overall, as a veteran, he can earn a spot on any team.

Juan also has experience playing alongside Wayne Rooney, Didier Drogba, Xavi, and Didier. The only drawback that Juan has is that age is catching up on him.

Nonetheless, he has the speed and endurance to last at least one season. Even if you only get him for one season, it’s a steal.

Jason Denayer is the Ligue 1 MVP, and he is one of the league’s most consistent performers. He is best suited as a defensive linchpin for any team.

On top of these abilities, he has good speed, incredible defensive stats, and a stocky in-game build. All in all, Denayer can be an invaluable asset to any team.

Santiago Arias should be an ideal pick if you want a player to be proficient in both offense and defense. Arias is an exceptionally versatile player with above-average stats.

Unfortunately, he was unable to demonstrate his abilities during the previous season due to injuries, which resulted in his contract not being extended. Now that he has recovered, it is the ideal time to pick up this free agent.

Santiago still has the endurance and speed to handle any difficult situations, making him a must-have.

Look no further than Fabian Delph if you need a versatile free agent who can play in a variety of positions. He has the skills necessary to perform well in any position on the football field.

Furthermore, he has extensive experience playing for elite Premier League clubs, so you can rely on him in difficult situations. While his ratings have dropped in recent times, he can still provide a lot on the virtual pitch.

Adel Taraabt is a deft midfielder who adds a cutting edge to the offensive. He has the ability to create goalscoring opportunities on occasion. His presence alone will make opponents nervous because he possesses the ability to easily navigate any team’s defense.

Adel Taraabt, now of age, has a few more years in the tank, so it’s wise to go for him while he lasts.

If you are interested in signing a Legendary free agent, then Lionel Messi is the best choice for you. Messi is one of the most agile players on the field, which is mostly due to his short stature.

He is considered as one of the fastest players to ever step foot on the field and he possesses outstanding leg strength which he uses to control the ball. This makes him a must-have player to sign.

Ronaldo best plays at the center of the field and is best used as a versatile striker who can score a goal using either of his feet. He can surely be a valuable free agent to have.

Benzema is a French player who is highly regarded as one of the best strikers in the game. He is the second-highest goalscorer during his time in Real Madrid.

If you are interested in signing a player who possesses both finishing and playmaking, then Karim Benzema is perhaps the best option available for you in FIFA 23.

Rashford is an upcoming talent but has already achieved more than anyone can ask for. He has set a record as the youngest English player to score in a debut senior international match.

He uses his left footing to cut inside the goal and follows it up by going right-foot to shoot a goal, making him one of the most creative players to sign.

Firmino is a Brazilian who plays as a forward/attacking midfielder. He earned the title of Breakthrough of the Year for scoring 16 goals in 33 games during the 2013–14 Bundesliga season.

Whenever he is put on the field, he uses his fast-paced ball handling to score a goal. Due to his over-whelming shooting and dribbling skills, many players consider him to be the trickiest player for any opposition.