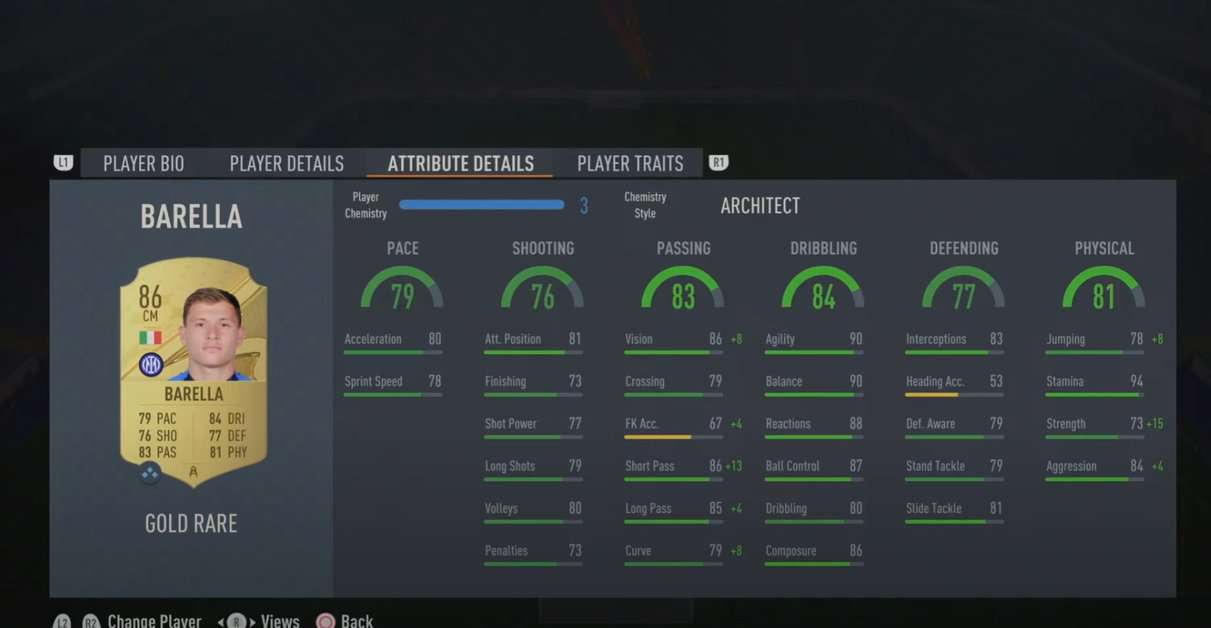 If a team consists of players who are friendly with each other, understand each, and relate to each other because of certain aspects then it is bound to improve the overall performance of the team.

A similar mechanic is also featured in FIFA and we are going to take a deeper dive into how Chemistry works in FIFA 23.

How Team Chemistry works in FIFA 23

Team Chemistry is a big contributor to the performance of the players in FIFA 23. It is important to understand how it works so we can create a team that positively affects the chemistry and thus stats of the players.

Let’s talk about how chemistry works and what are the factors that affect Chemistry. Every team can have a maximum of 33 chemistry points and they increase or decrease based on what players are in your team.

Every player can contribute a total of 3 points with 0 being the minimum and 3 being the maximum. The Player’s chemistry points are indicated by diamonds on the bottom left of the player’s card.

If a player has 0 stars, then he will play at the base stats mentioned on his player card, and depending on the number of chemistry points, the stats will improve.

There is a lot of stuff that was changed in FIFA 23 that affected the chemistry in the previous generations but now it doesn’t. Let’s look at all the changes to Team Chemistry in FIFA 23.

How to gain Team Chemistry In FIFA 23

You need to understand the different chemistry levels to get the maximum chemistry for your FIFA 23 Ultimate team. You will only be available to receive chemistry points if you line up the players in their correct positions.

In Manchester City, Joao Cancelo plays two positions; right-back and left-back. Thus, you can play him in either of the positions to gain a point of chemistry for your team.

Use the player menu to find out about the players’ positions and then place them in their correct places. However, if you notice a yellow exclamation mark present on the left side of the Player, then you are making an error in correctly positioning the Player.

In that case, you will not receive any points for your team chemistry, and you must place the Player in the right position to gain the points.

Moreover, remember that in FIFA 23, you can utilize the managers to gain chemistry points for the team. If the manager is from the same nation, region, or league as other players, then the team players will receive one point for chemistry.

Moreover, to gain complete chemistry, we must understand the table given below in the guide.

Now that we know how chemistry works in FIFA 23, let’s look at what are the factors that affect chemistry.

Nation chemistry works the same way as mentioned above, but the players’ nationality is considered here.

For example, if you make the team choose Messi and Di Maria as your front players, then both players will receive 1 chemistry point as they belong to the same nation, Argentina.

Moreover, having more same-nationality players further improves your chemistry, as shown in the above table. If you have 5 same nationality players, then players will receive 2 points, and if the number of players goes up to 7, then the chemistry points increase to 3.

Moreover, this means that those 7 same nationality players will have maximum chemistry points and a cumulative number of 21 points.

In the same way, if there are two players from the same league, let’s say the Spanish League, then both players will get 1 chemistry point.

If we add Dembele to the team where Modric and Vinicius are playing, they will have two points for the club category and one more point for the league category.

For example, if you pick 8 Premier League Players for your team, you will have 3 chemistry points, and the cumulative points will be 24.

This should explain how League, Nationality, and Clubs affect team chemistry.

Icons and Heroes directly affect the team’s overall chemistry and how it happens is that if an Icon or a Hero is playing at its preferred position, then it will automatically give him 3 chemistry points.

If the Icon or Hero is not in its intended position, their chemistry with the team will not count. They also contribute to the Nationality, League, and Club categories but with a twist.

How do Substitutions affect Team Chemistry?

In FIFA Ultimate, there can be no changes in the team chemistry once the match starts, even if the manager changes tactics, players’ positions, or substitute players.

This means that the chemistry will be locked, and the substituted players will play at their base attributes since the negative attributes have been removed from the system.