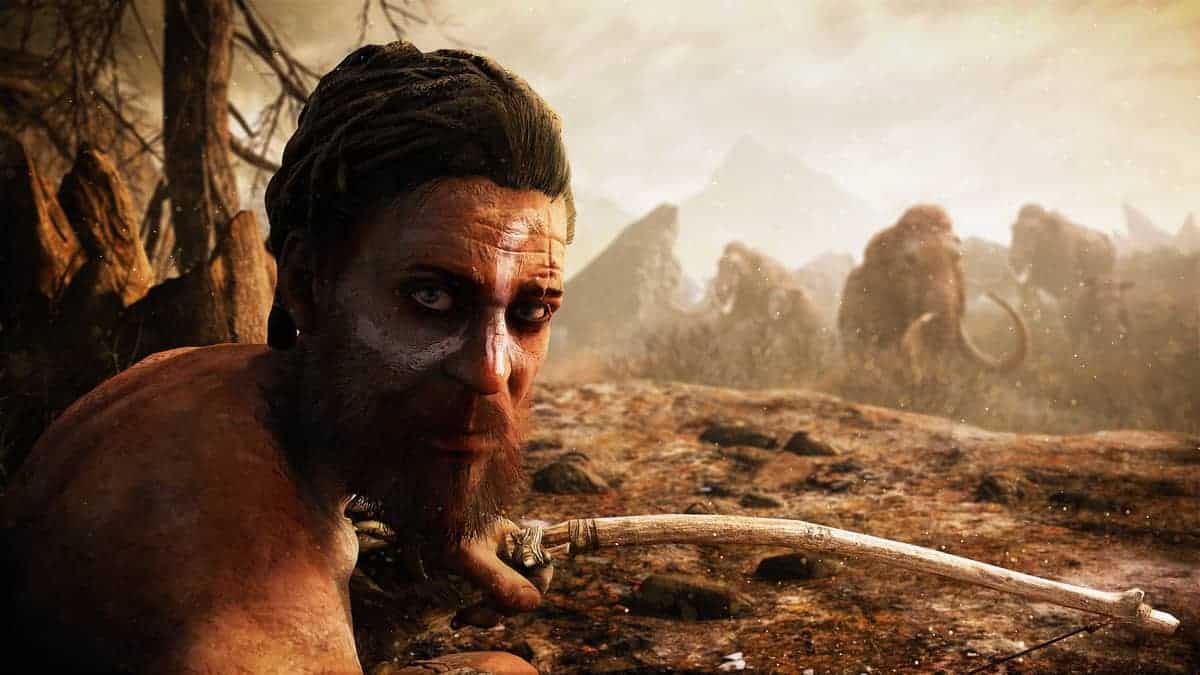 Since its inception, the Far Cry game franchise has been putting players in exotic open world locations such as tropical islands, African planes and Himalayan Mountains. Far Cry Primal seeks to change this formula by earning its name and taking its world to a less contemporary setting.

Far Cry Primal puts the players in the shoes of Takkar, a member of a nomadic tribe called Wenja, who is trying to save his tribe and survive in a place called Oros.

The land of Oros is set in prehistoric central Europe, at a time when the ice-age had come to an end and stone-age was in full swing.

While the game has its lighter moments, most of the Far Cry Primal’s story is about survival and is spent gathering resources, dealing with primitive wildlife, expanding the tribal village and protecting the Wenja from enemy tribes which include; the savage, blood thirsty cannibals called Udam and sun worshiping arsonists called Izila.

Whereas the previous Far Cry games relied on a charismatic antagonist to drive their story, it is not so In Far Cry Primal. This time the game’s narrative is less focused on a singular villain and more reliant on plight of the Wenja tribe and motivations of fellow tribesmen.

In the wake of Far Cry 3 Blood Dragon expansion’s success, many gamers wondered why Far Cry 4 did not receive a similar; stand-alone expansion and there was a perception that Far Cry Primal was just that; a glorified expansion for Far Cry 4.

While it is true that certain sections of the game are clearly inspired from the Shangi-La sections present in Far Cry 4, Primal is no mere re-skin of the old concept and features gameplay and content worthy of a separate game.

The core-mechanics and basic gameplay elements that have been part of Far Cry franchise remain the same. Running, jumping, crouch-walking, ranged and melee combat, as well as the use of healing items and choosing weapons out of weapon wheel in Far Cry Primal feel similar to how they functioned in Far Cry 3 and 4.

The game also retains progression formula of the Far Cry series, where the story missions are sequentially littered throughout the open world map and the map itself is unlocked by exploring new areas and liberating outposts.

Giant bonfires replace the tower mechanic from previous Far Cry games, as lighting them acts as a beacon that marks your territory and adds to the Wenja village population. Claiming a bonfire or an enemy outpost gets rid of nearby enemies and unlocks fast travel points and nearby side missions.

Where the game takes its departure from the established Far Cry formula is in its reverence for the pre-historic, Stone-age culture and aesthetic. 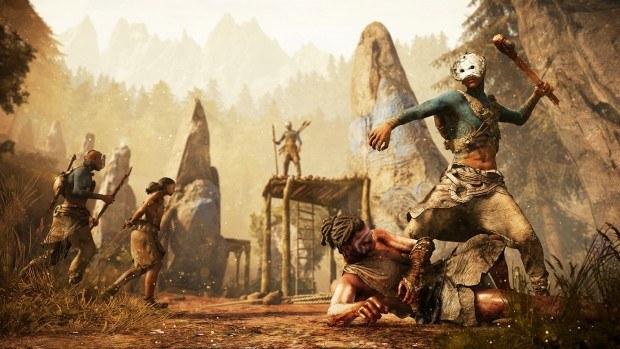 Gameplay in Far Cry Primal is overhauled to suit the Hunter-Gatherer culture by giving more emphasis on surviving wildlife, increasing your tribe as well as a cycle of scavenging, hunting, crafting and melee combat.

Even though the Far Cry series has always been about exploring exotic environments, as expected from its theme, wild life plays a much larger role in Primal’s gameplay than previous Far Cry games.

Exploration is now a much more deadly prospect with your survival at stake from dangers ranging from enemy tribesmen to predators like wolf packs, lions and bears, as well as contextual aggressors like snakes and alligators.

Far Cry Primal features a meaningful ‘Day and Night Cycle’ where exploration at night not only presents players with low visibility and more aggressive predators, but it also presents opportunity to encounter unique animals, plants and collectable items.

Another significant part of Far Cry Primal’s gameplay is hunting. Players can not only kill animals like they did in previous games but also use the new ‘Hunter’s Vision’ to identify different resources and tracking their prey by looking for scents, foot prints and blood trails.

Hunting animals rewards players with meat; which not only can be used for creating healing items but also the materials necessary for crafting.

The role of crafting has been increased from the past Far Cry games as exploring and scavenging for bones, wood, stones, flowers, animal skin and meat can allow players to craft healing items, village shelters as well as make and upgrade weaponry.

The absence of modern technologies in the stone-age has necessitated that weapons like fire-arms and explosives, that have been a staple of Fry Cry franchise, are no longer available for use.

Instead, Takkar can equip melee weapons such as clubs, spears, and knives as well as ranged weapons like slings and bows, each of which can lose durability with use and can be upgraded to fortify their strength and damage.

In addition to shooting arrows and throwing clubs and spears, Takkar can also craft and lob primitive bombs of different variety, such as the bee based sting bombs, poisonous berserk bombs and combustible fire bombs. 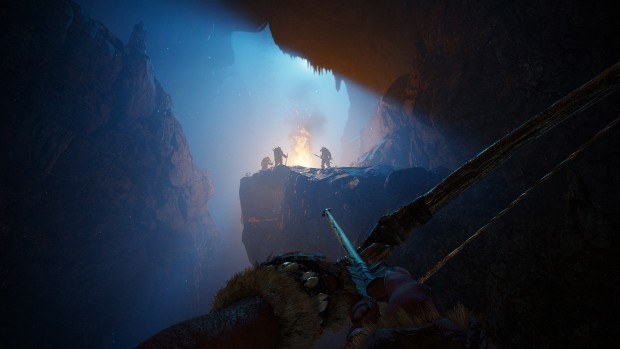 Fire actually plays an important role in the game as it is not only used to attack but also has defensive uses.

Takkar can make use of fat to ignite his weapons which can be used to add fire damage to normal attacks, burn path blocking vines, set up path campfires, scare off predators as well as for passive abilities like; seeing in darkened environments and surviving the chill of cold areas.

Although Far Cry Primal has less weapon variety and customization than previous games, its combat is more flexible as it not only incorporates melee and ranged weaponry, but also makes use of Takkar’s “Beast Master” skills.

The new Beast Master ability allows players to craft bait, use it to lure beasts and then tame them to add to Takkar’s arsenal for his beck and call.

From wolves and lions to bears and sabretooth tigers, there are more than 15 different types of beasts that can be tamed in Far Cry primal, each with their own attributes and strengths.

A beast can be called at a location and commanded to attack a target. If used strategically, companion beasts can lead to situations where Takkar can clear whole outposts without even lifting a finger.

Thankfully this mechanic does not break the game by overpowering the player. No matter how speedy or powerful, every beast can get wounded, which can eventually lead to its death if not promptly healed.

In case of death, Takkar can choose to use resources to revive it in the Beast menu or tame another beast. In addition to his Beast Master ability, Takkar can also learn and upgrade 7 more ability types throughout the game.

Players can use the XP they have earned to spend Skill Points in 20 different skill trees spread across 8 skill sections including Survival, Gathering, Beast Master, Hunting, Fighting, Crafting and 2 story related skill types.

These skills range from improving health and healing, to learning new takedowns, and even gaining ability to call upon Takkar’s owl companion to scout his surroundings. 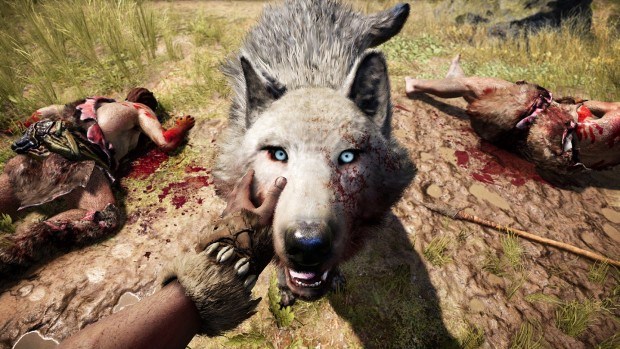 The world map of Far Cry Primal is definitely not as big as its predecessors, however what it lacks in size it more than makes up in depth.

The map of Oros is more closely packed with flora and fauna as well as locations like caves, outposts, waypoints and bonfires. This actually works out perfectly in the absence of vehicles and the fact that most travel and exploration in Primal has to be done on foot.

Far Cry Primal’s environments make great use of its Dunia engine to display the pre-historic land of Oros. From its lush forests and swampy marshes to rocky canyons and snowy mountains, these environments are beautifully created and are seamlessly linked with one another.

The game also features amazing atmospheric lighting which is a highlight whenever the player experiences the silver rays bathing the moonlit wilderness or when the sun scorches the planes of Oros with its golden light during dawn and dusk.

The game really nails the environmental immersion factor which becomes evident in instances such as; when animals and enemies naturally get camouflaged in the foliage or when the player is exploring the jungle in complete darkness of the night and suddenly sees glowing eyes and silhouettes a wolf pack edging closer.

This attention to detail carries over in shape of how animals move and interact with the environment. This not just limited to portrayal of wildlife but also extends to character expressions, player movement as well as gritty and grisly action, to create an end product that truly complements its visual aesthetics with fluid animations. 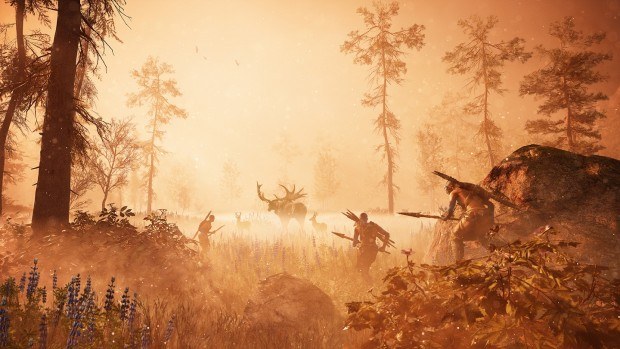 Far Cry Primal simulates primitive music with the use of wind and percussion instruments and composes its sounds with drums, chants, horns, chimes, flutes while peppering it all with very subtle use of modern instruments.

The game also does a wonderful job in terms of voice acting. While the language itself is made-up, the dialogue delivery perfectly uses vocal patterns to convey subtleties ranging from changes in tone and tenor to differences between accents of different tribes.

From the subtitles you can tell that the language spoken is not gibberish as speech patterns and word phonetics actually correspond to the meaning of the words being spoken.

It is difficult to express how much the absence of English and the use of these “ancient languages” adds to the immersion and illusion of being in a living breathing prehistoric environment. 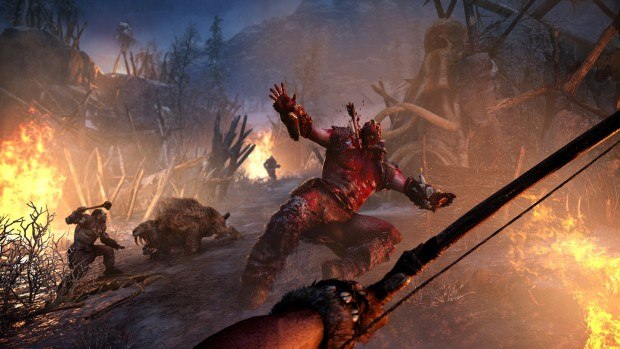 Far Cry Primal truly brings it all when it comes to its presentation; however one aspect where it lacks is in its multiplayer department. Co-op and PVP modes that have been featured in past Far Cry games, are all totally absent in Far Cry Primal.

While this may be disappointing for players who wish to explore and play the game with their friends, it seems like a fair compromise for a game that offers such a full and immersive single player experience.

The game features a main campaign that can last anywhere from 15-20 hours, upon which there are several types of side missions to complete, including; participating in tribal clashes, saving Wenja captives, searching and rescuing fellow tribesmen, escorting group of Wejna to safety, predator hunting quests and cave explorations.

In short; there is plenty to do in the game. And while it might take a while for Far Cry veterans to acclimate from the high paced, vehicle swapping, guns blazing combat of past games to the deliberately paced close-ranged battles of Far Cry Primal, the game offers a truly immersive experience of exploring and surviving in a systemic prehistoric open world.

A truly immersive experience of exploring and surviving in a systemic prehistoric open world.