Of the many surprises at E3 2018, Dying Light 2 was definitely one of them. You would think the popularity and support for content and DLC for the first entry throughout the years meant that the developers were not looking to focus on anything else. However, that was not the case! Let us discuss everything we know about Dying Light 2.

Set 15 years after the happenings in the first installment, the game takes place in the last surviving settlement known to humankind. Judging from the trailer, we can already see how well this sequel improves over the first game just in environmental details and visuals.

There is a brighter and much colorful palette to give a sense of hope that was not present in the previous game.

Dying Light 2. The fate of a decaying City is in your hands. Every choice matters. Discover the bold sequel to a best-selling open-world phenomenon. #YourChoices #YourWorld #DyingLight2 #E3 pic.twitter.com/rZ9J7CPoa2

Thinking about the aim of the story, this decision makes perfect sense. After all, you are working to bring hope back to the survivors who have gone through much of the trauma in this post-apocalyptic world. As for how much more expansive the world is, game designer Tymon Smektala had to say:

“The map is four times the size of the map of the first Dying Light.”

In this world, not only will you be battling with the lethal and terrifying creatures at night but also during the day, your main concern will be humans themselves separated by an alliance with different factions. The game, therefore, is not your typical zombie-survival game but as Smektala points out:

“This isn’t just a zombie game. This is a game about humans and the horror they can cause.”

Let us see what more surprises and bits of info we may get from the studio behind the game, Techland.

The game designer promises to expand and improve on all the skills and move-set of the previous game. He aims to make the whole game; especially the parkour sections feel even more fluid and smooth.

From the trailer, you get an idea of it when you see the protagonist lunging onto enemies from windows and cover. Furthermore, the game will also have ‘parkour puzzles’ that will require you to use your skills in-game and your thinking outside of it to get to your goal.

Moreover, you can see how much more dynamic the whole combat feels. Players will need to make use of what they can find around. This means a careful analysis of the surroundings and grabbing things that you can use in that particular circumstance. For e.g., we saw in the trailer how the player was able to craft a blade out of some objects lying around. 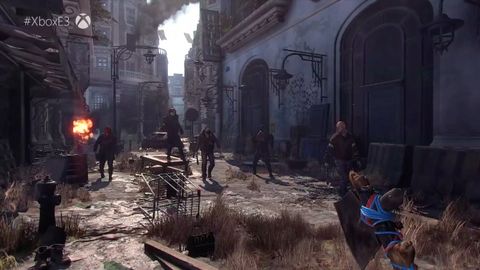 There also seems to be a new parry and block mechanic in the game’s combat that will add depth and variety to it. It’s safe to say both crafting weapons and other utilities, along with exploration to find the desired items from the environment, will make the survival experience all the more visceral and immersive.

With many of the game developers promising to branch out storylines in games, especially RPGs, via choices, only a few come true. Dying Light 2 promises something similar but you can observe how the events are directly affected as a result of your decision-making.

Choices and consequences are really a big deal in video games when you have a Narrative Designer like Chris Avellone who has worked on Fallout: New Vegas and The Witcher 3, and we all know how choices affected the fate of characters in those games.

I hope that he can bring the same talent and perhaps something new to the table on his work on Dying Light 2.

The designer calls it a ‘Narrative Sandbox’ where every choice you make has an impact on the world around you. Both from the example in the trailer and the demo shown off-screen, this could not be more evident. The objective starts when you get to know that a precious health resource, water, is being locked behind some kind of deal between two factions.

Your choice comes here if you choose to ignore what the bandits are saying and apply a violent touch then you have a clean water supply and several structures like pulleys and slides that you can use to ease your exploration. All of this comes at a price though.

Apparently, your faction, the Peacekeepers, has no chill, will hang people upon even the slightest attempt at stealing something, and will stand by these strict and harsh regulations.

You could have also gone down a different path that was to broker a deal with the bandits instead which will be the greedier of the two options. Now you will be able to sell water on the black market and this will open new trades and markets for valuable resources you can gather.

However, this also means some criminal factions honing in on your location and changing the outlook of the whole city.

Therefore, every choice you make is not necessarily a good one or a bad one. Nothing is binary here; everything lies in the grey region. After all, that is what the team at Techland are going for, an ambitious and immersive game or as Smektala calls it:

”This is a bold sequel for us… If you understand those rules you can follow and play them, to get the narrative where you want it to be.”

There’s no official release date for Dying Light 2 as of now. The game will launch on PC, PS4 and Xbox One.