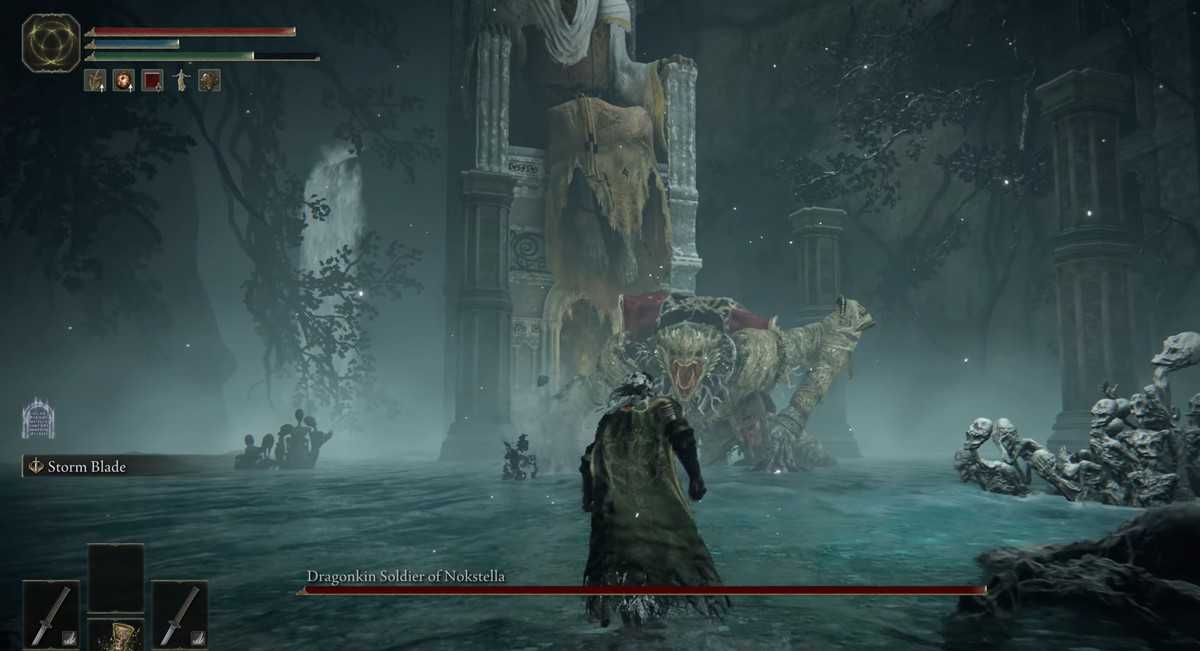 Before we tell you how to defeat Dragonkin Soldier of Nokstella in Elden Ring, we must first lead you to the fight itself. Below we’ve outlined how you can find this boss.

However, you can’t just reach that place directly. You have to start from the Ainsel River Well location shown on the map above. Enter that and use the lift to get down to the Ainsel River.

Once inside follow the cave on the left side and move forward through the river water. You will encounter some giant ants here as well. Move forward and take the right side path.

Again, after moving a little forward use the path on the right side for moving forward. You will reach an open area with a doorway in the right corner. Go through that doorway and move forward.

You will see another cave right in front, but you have to enter the room on the right side and use the lift to go down. Now you will enter the Uhl Palace Ruins.

Continue to move forward towards the doorway and enter it. Head straight and get out from the other end. Here you will enter a large area with some enemies.

The easiest way of passing it is to go through the river water on the left side. Continue to follow the water and again you will get to an area with multiple paths.

Follow the path on the right side and head forward. After moving a little forward again turn right and enter the path on the left side. Continue to move forward and you will reach the entrance to the Boss Room.

You can beat Dragonkin Soldier of Nokstella once you have access to Liurnia of Lakes. Dragonkin is a huge creature and has massive attacks. To take him down, it is recommended that your character should have a minimum level of 60 with high vigor and attack stats.

Dragonkin Soldier of Nokstella is weak against Slash Damage. Slash damage is a type of physical attack that can be done by swords, daggers, and katanas. So you can easily beat him if you have a weapon that can do slash damage.

Dragonkin soldier of Nokstella has a variety of attacks that are split between two phases.

The first and the most basic attack of Dragonkin is right-hand sweep. In this attack Dragonkin claws the area in front of him from right to left.

You can easily counter this attack by rolling backward or by running in the opposite direction of his sweep.

These two attacks are almost similar. In the right-hand slam, he raises only his right hand to slam it onto the ground to produce a shockwave. But in Ground Slam, he uses both of his hands to slam for the same effect.

To counter both these attacks you can jump up and down or you can go out of the range of Dragonkin to deal less damage.

Dragonkin’s next attack is Lunging Claw where he launches his left arm at you before dragging it back.

To counter the sweep, move toward the left side of his body and to dodge his drag attack, roll backward otherwise you will get caught in his attack.

The second phase of his attack starts when his health is down by 50 percent.

Dragonkin Soldier of Nokstella throws lightning bolts at you to kick-start his second phase. The bolts will sometimes freeze the ground to cause frostbite before making the area explode.

To counter, run in the opposite direction of the boss and jump to be safe from the frostbite. Make sure to be clear of the frozen grounds before the explosion happens.

In lightning slam, he raises his right hand in the sky to throw a massive lightning bolt on the ground to explode the area of impact.

You can dodge this attack easily as it takes time for the boss to gather the lightning bolt in his hand. You can use the time to get clear.

How to Defeat the Dragonkin Soldier of Nokstella in Elden Ring

After entering the boss room, you will see a huge throne with a Corpse sitting on it. When you move towards it Dragonkin Soldier of Nokstella will fall from the ceiling.

It is a huge boss that stays on his knees most of the time while battling with him.  The fight with this boss is in two phases. In the first phase, his attacks are quite difficult for you to dodge.

Early on in the battle, he will attack you with his arm attack in which he leaps forward and smashes his huge arm on you. You have to move behind while he is preparing this attack since it can be difficult for you to dodge because of its huge size.

Using some strong spells against him is a great option. His health will fall pretty quickly with the ranged attacks.

If you are using a melee build, you can use his size against him and stay near his legs and slash away. You can’t slash forever though so make sure you move away when he’s about to attack you.

Once his health is less than half, he will start to glow and an explosion will happen.  Now the fight will enter the second phase. In this phase, wings appear on his body, and he becomes charged with lightning.

In this phase, Dragonkin Soldier of Nokstella is extremely strong as not only does it do lightning damage but also builds up frost. What’s even more annoying is that the Dragonskin Soldier gains a few ranged attacks in an AoE. These can catch you off guard if you’re not on the move.

The strategy here is to wait for the Dragonskin Soldier of Nokstella to fly up and swoop down. You need to dodge this attack and use the opportunity to get close to him. At this range, you need to start attacking as you did in the previous phase. Make sure to not overextend and dodge his attacks.

There will be some scary new overhead lightning attacks, but you can easily get away by dodging towards the left, towards its extended back leg.

To make this battle even easier, you can also summon allies as well to help you out in the battle. They will also get the reward for helping you out and defeating this boss.

You will be rewarded with the Frozen Lightning Spear and 12000 Runes for defeating Dragonkin Soldier of Nokstella in Elden Ring. Your co-op allies will get a Rune Arc, 3000 Runes, and Furlcalling Finger Remedy for defeating this boss with you.

How to Cheese Dragonkin Soldier of Nokstella

You can easily cheese this boss by continuously attacking his knees from the back. Make your way behind him by going from the left side once you enter the arena. There, go between his legs and use your weapon to do slash damage to his knee.

All you have to do is move back as well to always remain behind him and between his legs. So, keep using your slash damage on his knee until you defeat him.