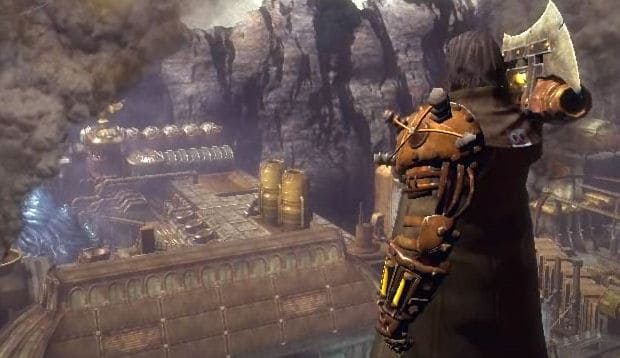 Wei-Yao Lu, CEO of developer Fuzzyeyes, has released an emphatic Facebook post about vaporware Edge of Twilight. In the lengthy update, Lu discusses the many hardships in trying to develop the once highly anticipated title.

Edge of Twilight is a project that dates back eight years ago by now, so it’s been around since the Playstation 2, Xbox and Gamecube generation. It features a steampunk world where a central character, Lex, can shift forms to represent a light and a dark side.

Gameplay is part combat action that switches between these two worlds, while another part is set on platform elements. By transforming into a more nimble, beastlike form, the cracter can reach new heights, prompting players to alter states to explore the world.

Eventually, development crumbled and there were major layoffs in the company in 2009 that pretty much disbanded the Australian developer, transitioning it to Asia. Trouble didn’t stop there, as seen in a troubling amount of events cataloged by the company:

So many team members had to sacrifice their time, breaking up with their lovers, getting committed to mental hospitals, taking drugs, placed under arrest by the police, falling from balcony, getting deported and even getting divorced – all resulting from the stress from the game’s development.

Early last year, Edge of Twilight reemerged from its ashes and a sort of trilogy was announced with a small mobile game ramping up to the main release. Some confusing information from the company, as well as a lackluster reception to the iOS title, once more put the game down in the dumps, even though Edge of Twilight – Athyr Above hit its sales target.

Despite all setbacks, Fuzzyeyes is determined to bring Edge of Twilight to an actual launch at some point. In fact, Lu states that the company is now able to reach more platforms and is waiting on publishers to be able to share more info.

For now, Edge of Twilight is left with this message:

All we can say for now is we are at the final count down.