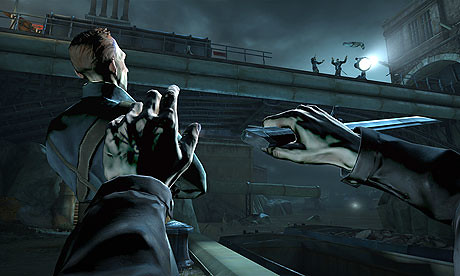 As an avenger, one must be fully aware of the weapons and the equipment available at one’s disposal. You can use these weapons tactically to deal with the enemies and the hurdles in your path. This Dishonored Weapons and Equipment guide will give you a rundown of all the tools available in your arsenal.

Some of the equipment/weapons are well suited for open combat while others have been developed to support the stealthy approach. So, whatever your strategy is, one way or another, you are going to need them. For more help on Dishonored, read our Sokolov Paintings, Bone Charms and Runes Locations Guide.

Following are the Weapons and Equipment you can find in Dunwall:

Corvo’s Sword
You can make use of the sword for both the open combat, and stealth kills. The material used to forge the sword is good enough to block the enemy attacks, making you stronger in defense.

Crossbow
The crossbow is a useful weapon to take out enemies to take from distance. Apart from the standard bolts that kill enemies, there are some other functions you can perform with this weapon. For instance, the sleeping bolt will make enemies sleep rather than killing them, which can tactically be beneficial. Without any upgrades you can use 10 of either Sleep Darts, Incendiary or crossbow bolts!

Elixirs
These potions help to restore health and mana of Corvo..

Grenade
In a game like dishonored, a weapon like a grenade can be one enticing item to use. Yes, it will can take out multiple enemies at a time but the sound produced by it will draw a lot of attention, which can be troublesome. So, be careful in its use.

Pistol
Collected from the Dunwall Safe in the Emperial Tower, you will be able to use the single-shot pistol in the game. You will come across many enemies carrying pistols so it won’t be a bad idea to carry one. Again, the ammunition (explosive or standard) will create a lot of nose so you will have to be cautious so that you don’t draw any unwanted attention.

Rewire Tools
These tools will help you to deal with the electronic equipment. Apart from shutting down the various electronic barriers, you will be able to hack tools that can be turned against the enemies. You need to be cautious as by using them, you may have difficulty with some achievements like Clean Hands.

Spring Razor
It’s a razor land trap just like the claymore. You can place it on the ground and wait for the enemy to come in its effective radius. On activation, it will release a sphere of lethal blades that cannot be dodged by the victim.

Spy Glass
It will improve Corvo’s vision to see distant targets. You can use it as a scope while using the crossbow. The clarity ahead can help you to devise your strategy and taking out the enemies with more precision.

Sticky Grenades
Quite a useful tool for an assassin. It works just like the normal grenades, but the difference is that it will be attached to some solid surface (body or object) before detonating.

The Heart
The device has multiple functions. For example, it can help you out in detecting various objects (like Altair’s eagle vision) and assist you in other non-combat activities.