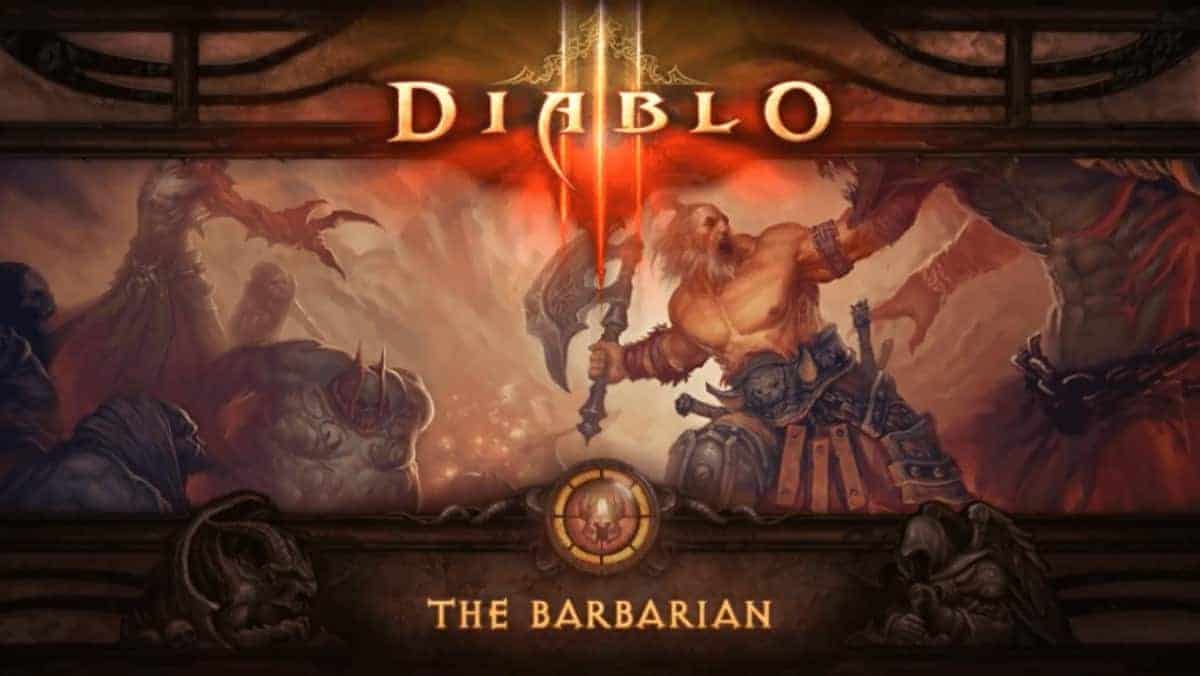 The Barbarian is hands down my personal favorite class in Diablo 3. It’s a class that’s easy to start with, develops well, and has well-tuned skills that makes it overall very well balanced.

Prior to the 1.0.08 patch, the Barbarian was easily the strongest character and also the beefiest, making him/her a bit OP. Now things have changed though, and there’s more emphasis on the Barbarian being a ‘tank’ rather than a super-heavy damage dealer.

As things have change, so has everyone’s approach to how the play each class. Classes like the Wizard and Demon Hunter prevail in heavy damage, while the Monk and the Witch Doctor are best known for their supportive aspects and crowd control respectively.

The Barbarian is perhaps the most balanced class, mixing large amount of damage with great defensive. Provided you have good equipment, you can very easily solo Inferno mode with the Barbarian without too much trouble.

Here are some of the most successful Barbarian builds so far. Do note that a lot depends on items, which we’ll discuss, but we’ll keep our focus mostly on the skills and how they combine together to make an effective build.

The Whirling Revenge – Click To Open Build
Ladies and gentle-geeks, I present you with my own personal Inferno Barbarian build. This is the build I have found to be most successful in my own personal play-through of Inferno. Like I said before, a lot depends upon items, so you’ll be needing some demanding equipment if you wish to make this build work.

Active Skills
Once I unlocked Frenzy, it remained my favorite Fury generating skill, and will remain such unless Blizzard for some silly reason decides to nerf it. Fury with the Maniac Rune will unforgivably increase your attack damage by a hell lot.

Frenzy will always remain your standard and first mode of attack in all situations for this build, so you want to make sure that the damage output with your first set of swings is maximum. I use dual-weapons (swords, over axes and maces for faster attack speeds), which combine superbly with Frenzy.

Fury develops in no time with Frenzy, and the skill to immediate use after that for unleashing havoc is Whirlwind. Whirlwind is by far my favorite ability in the game, and a Barbarian without Whirlwind is just not worth the time; it’s simply one of those must-have abilities.

I like to use the Volcanic Eruption rune to get that huge fire coverage and additional damage in. In short, this is the perfect ability against a crowd of enemies, and works perfect with all the other skills of the build.

Another equally important skill, and also one of my favorite skills in the game, is Revenge.

Now, Revenge for the most part seems like a gamble, since it may or may not trigger, but with the Provocation rune, it certainly triggers when it is needed most. This is your primary healing skill, and a major part of your survivability. So, whenever you see that hulking barbarian avatar of the Revenge skill colorize, make sure you smack that button, even if you have full health, since it also does tons of damage.

Then we come to the final two offensive skills: Wrath of the Berserker and Call of the Ancients. Most others like myself would complain about the ridiculous cool-down on both the skills, but this downside to these otherwise super-powerful abilities is greatly reduced with the Boon of Bul-Kathos passive, making them useable for every other tough crowd encounter.

Do note that these two skills are situational, and should only be used when you’re facing elite enemies, bosses, or when there is no other option. It’s important to remember that while in the Berserker form, you cannot be CC’ed, which is really useful against those horrible elites with Fear and that awful ice attack.

Last but not least is War Cry, a heavily underrated defensive skill and Fury generator. War Cry is brilliant because it gives you defenses, and with the Invigorate rune will also boost your max health by 10%.

Passive Skills
Passive skills are a toughy with the Barbarian, simply because the class has so many good ones. I like a mix of utility, offense and defense, and that’s why the Brawler, Bloodthirst, and Boon of Bul-Kathos trio seems to work best for me. Brawler gives you just that extra bit of damage you need, and Bloodthirst returns plenty of health.

Now, you might say 3% of damage returned as health isn’t much, but let’s not forget that you’re in Inferno Mode – you should be doing around 400,000+ (I could regularly do 1 million) damage with your critical hits (and you should have a large crit chance too, around 60+ percent). With that much damage, I’m pretty sure 3% can return a ridiculous amount of health per hit.

Weapons and Armor
It’s hard to tell someone what they should and shouldn’t be wearing/wielding, so we’ll keep it general mostly.

You should look for massive Vitality and Strength boosts with your Armor, but keep it focused more on the Vitality. Have your socketed armor (chest plate and pants) embedded with Amethysts for as much vitality as possible, whereas the gloves, weapons, and other remaining sockets are filled with Rubies to give you maximum Strength.

I like to play with two weapons, both swords to give good attack speeds and large damage. Apart from that, look for critical hit chance to get the most out of Bloodthirst and some of the other abilities.

Well, that’s pretty much how my Barbarian is working out. Now, if you haven’t progressed to Inferno yet, you can always consider the Nightmare and Hell suggestive builds.

By the time you’re on Nightmare difficulty, you should have a level of around 32-35. If you don’t then you haven’t been playing the game efficiently. Once you acquire this much level, it’s time to beef up your Barbarian.

I found Normal difficulty very easy with the Barbarian, and went through it without dying once (it took me 10 seconds to kill the final boss). Nightmare will introduce you to less easy-going elite monsters and enemy hordes, so you need to rethink your strategy.

Frenzy and Bash both seem to work equally well for most levels, and many even progress on to use Bash in Hell and Inferno mode.

For Build #1, Battle Rage will be your most important skill to constantly have activated. You want to deal as much damage as possible in Nightmare to avoid accumulating enemies around yourself. Revenge and Whirlwind should help you take care of crowds, but you should always rely on building up Fury to execute Whirlwind primarily, since Revenge is a chance-based skill.

Wrath of the Berserker is there to get you out of tough situations, and for maximizing damage against elites and bosses. Remember, we don’t get the Boon of Bul-Kathos till level 60, so use it wisely before it goes into its long cooldown.

Animosity will give you more opportunity to use skills like Whirlwind and Sprint with its increased Fury generation, and Tough as Nails should give you additional armor. Bloodthirst isn’t too effective at this point, so you might want to consider something else if you feel the 3% damage-return isn’t helping.

Build #2 is somewhat similar in concept, except you now have Bash for additional damage.

The Punish rune should really make skills like Whirlwind and Overpower do much more damage, and this can stack up very well with the buff from Battle Rage. Again, Wrath of the Berserker is very important for those troublesome situations. I like using Ruthless alongside the Killing Spree rune of Overpower for some additional crit.

Hell is sort of odd for the Barbarian, since many of the runes unlocked at this stage aren’t really worthwhile. You should be around level 45-50 when you reach Hell, and towards the last Act should have your Barbarian leveled to full 60.

Build #1 is thus very similar to that of Nightmare, except that we’re using an additional defensive skill, which is Ignore Pain. Now, I actually opted for Revenge here instead of Battle Rage to give myself better healing, but that is up to you. Many people feel they can play without Revenge, and often opt for War Cry.

With the Into the Fray rune active for Battle Rage, you will be generating much more Fury than usual, and will be able to use Whirlwind a lot more often. Ignore Pain works very well against elite enemies, and can combine with Wrath of the Berserker to be a great defensive buff. Hell mode isn’t easy, and you’ll face the toughest foes in the middle of Act III and throughout Act IV.

By this time you should seriously consider Revenge with more superior runes, and also opt to take Call of the Ancients instead of Ignore Pain. Remember, the best defense is a great offense, and that phrase fits very well with the Barbarian.

Brawler is a passive that I’ve always liked for its small damage boost, and you’re almost always surrounded by a large set of enemies rather than one, but consider swapping it for something like Unforgiving towards the end.

Apart from that, Nerves of Steel and Bloodthirst are no-brainer defensive skills.

Build #2 swaps Frenzy for Bash, this time with Instigation, a very useful Fury-generation rune that can allow for more use of the Whirlwind skill. We’re back to Revenge this time, and though you won’t unlock Provocation till level 52, it’s best to keep using it until you do. Overpower remains your regular burst-damage skill, with Ignore Pain and Wrath of the Berserker as two set of getaway and tough-enemy encounter skills.

We’re using the same passives as Build 1 here. Again, you could always swap Brawler for Unforgiving if you think you have good enough weapons and items for large damage.

Well, that’s pretty much it. If you wish that others should see your builds, please share them with us in the comments.