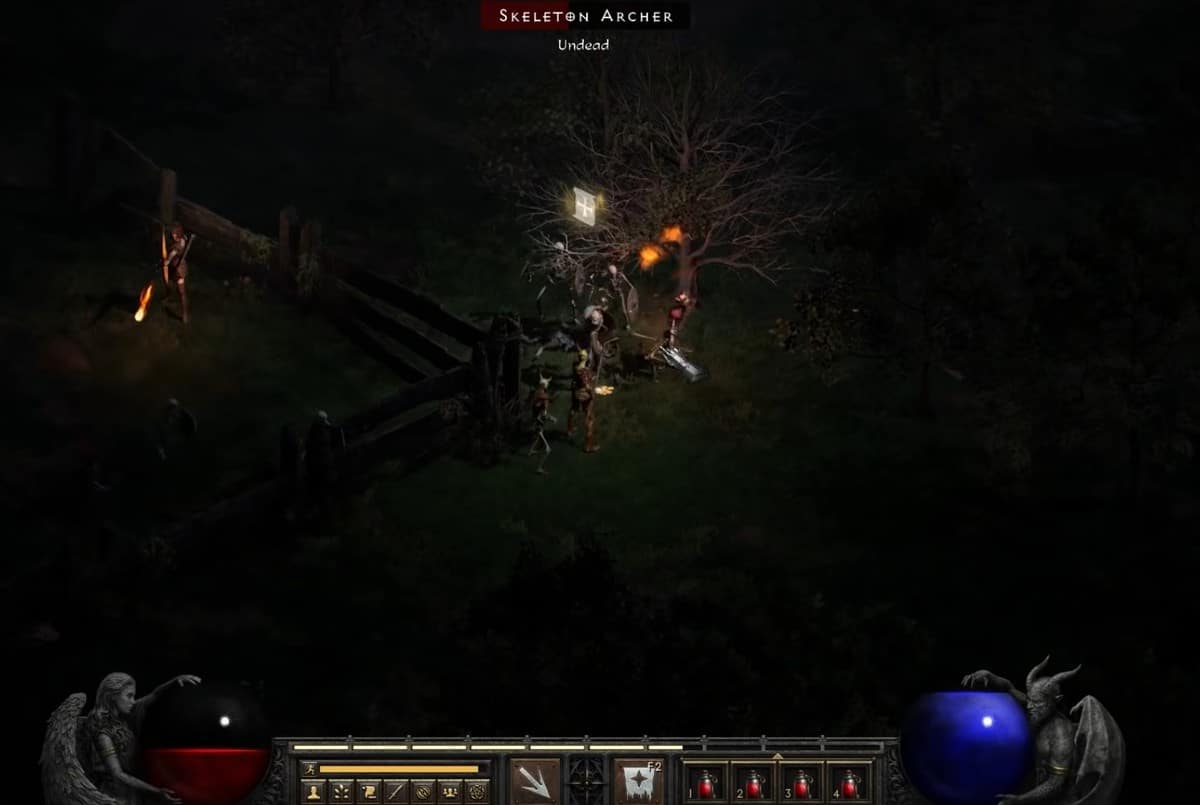 This guide will be showing you how you can build the perfect beginner Summoner Necromancer build in Diablo 2 Resurrected.

Before we jump into the build, keep in mind that this Summoner Necromancer has been specifically made for beginners. If you’re playing through end-game content, this isn’t the build for you.

If you’re a beginner, this is the perfect Summoner Necromancer that you can build. With this Necromancer build, you can clear practically all areas of the game.

A great thing about this build is that it has excellent support curses. So, if you’re playing with your friends, you’ll be able to serve as a great support for the whole team.

The only downside of a Summoner Necromancer build like this is that it has quite underwhelming kill speed and you have to be constantly keeping an eye on it for it to perform well. You won’t be able to just let play on its own.

Now that you know what you’re getting with this build, let’s start creating it. The first thing you need to do to start making the build is to go into Hell mode and respec your character by talking to Akara, the Act 1 Merchant. Respec all of your skill points and stat points.

Once that’s done, you can start creating your new skill and stat trees.

You need to put just enough points into these attributes so that you’re able to use the gear that this build requires. When you switch to different gear later on, you’ll need to adjust these points accordingly.

Before you start allocating points, keep in mind that you need to add them in the specific order that we’ve listed below for this build to work. It won’t work if you add the points in a random order.

Raise Skeleton is the heart of the build and will be your main summon, that’s why you’ll be maxing it out.

Skeleton Mastery will work hand-in-hand with Raise Skeletons by increasing the life and damage of your summoned skeletons, which is why you’ll be maxing that out too.

Revive will also be getting 20 points. This skill will give you the ability to raise your dead monsters once again and give them a stat bonus, significantly increasing your overall damage.

The revived monsters will not turn into Skeletons, as they do with the Raise Skeleton skill. Instead, they will be revived with the form they had in life.

Revive should be reserved for your most powerful monsters, and particularly the ranged ones, as ranged casters will not bother your melee monsters for space in the field.

Another thing to note is that when you revive Minions, Unique Monsters or Champions, they will not lose all of their special bonuses, making them the obvious choice to use your Revive Skill on.

Out of the Golems, the Clay Golem will be your strongest asset. This may sound a little confusing as on paper, the Clay Golem seems very weak and underpowered, but its utility comes from the fact that it can Slow enemies on hit, decreasing their global speed.

This debuff will stack on top of Decrepify (Curse), so your Clay Golems will be very effective at controlling all the enemies in their vicinity. This will then allow your Skeletons to make quick work of them.

Corpse Explosion will be the most powerful spell of this build; dealing the greatest damage out of all of your spells, which is why you’ll be putting 20 points into it.

The Curses for this build will significantly enhance the damage output of your minions. Every single one of these Curses weaken the targets, allowing your minions to deal significantly more damage than they would’ve dealt otherwise.

Decrepify is arguably the strongest Curse you’ll have. You’ll be constantly using this spell on bosses to save your life.

Whenever you’re in a rough spot, you can cast Decrepify on the target to make them painfully slow, allowing you to escape easily and heal yourself before continuing to fight.

If you have Spell Casters in your party, Lower Resist will also be a really strong Curse. It’ll give a very useful boost to your entire squad.

This is the recommended list of gear that you need to use for this Summoner Necromancer build. But since this is a guide for beginners, your gear won’t be anything too special, since you won’t have much of it as it is.

Weapon
The sword you want to use for this build is the Crystal Sword (Spirit). It’s surprisingly strong for easy it is to obtain and it gives you a load of useful buffs.

Armor
You’ll get some Leather Stealth armor in Act 1 Normal, and it’ll serve you really well with this build. This will be your most useful piece of armor.

Helmet
The Undead Crown helmet is a perfect choice for a Summoner Necromancer build. If you haven’t come across this helmet during your playthrough yet, then you can also use a Lore Circlet in its place.

Shield
For the shield, you need to use the Spirit Monarch shield. This shield will be the second most important piece of your gear puzzle.

Gloves
The Trang-Oul’s Claws are the perfect gloves for your build, and lucky for you, they happen to be very cheap in the trading community.

Boots
For Boots, the Sharkskin Boots of Acceleration are your best bet. They’re easy to obtain and will give you a nice boost to speed.

Belt/Amulet/Rings
You most likely won’t have any great Amulets or Belts at this point, so use whatever Magic or Rare Amulet/Belt that you’ve acquired. Try to look for one that has Necromancer skills on it.

And as for the rings, you don’t need to worry about them just yet. Use whatever rings that you’ve obtained on your journey up till now.

For the Mercenary of your build, you’ll want to choose the Act 2 Nightmare Offensive Mercenary.

This Mercenary will give you a Might Aura. This Aura will apply to all of your minions, giving them a hefty damage boost.

For the Mercenary’s gear, the weapon you need to get is the Insight War Scythe. This Scythe comes with a Meditation Aura, which will boost your mana, making it extremely useful on the battlefield. Surprisingly, this weapon is very cheap, so you won’t have a hard time obtaining it at all.

You can use the same Stealth armor that you’re using yourself. But for the helmet, try to get a Tal Rasha’s Horadric Crest Death Mask. This will increase the Mercenary’s life stolen per hit by 10%. This will help keep him alive for much longer, so you don’t have to constantly worry about healing him yourself.

Now that you’ve finished creating the Summoner Necromancer build, let’s talk about its ideal rotation and how you should be playing it to maximize its potential in Diablo 2 Resurrected.

The first thing you need to do is get yourself some skeletons. This means that you need to kill some monsters and turn them into your skeleton minions.

Doing this may seem like a chore, but there’s a trick that you can do to quickly farm yourself a who gang of skeletons. If you’re in Act 5, go through the Nihlathak Portal, which takes you to Nihlathak’s Temple.

In this temple, you’ll find several skeletons waiting to be resurrected. You can summon every single one of these skeletons here instantly and fill up your minion count.

One thing you must keep in mind is to never get the Halls of Pain Waypoint. If you get this waypoint, this portal will close permanently and you’ll never be able to use this temple to farm skeletons.

Once you have your skeletons summoned, the first thing you need to do is cast Amplify Damage on your enemies to increase the damage that your skeletons deal to them. This is an extremely important spell, so make sure you’re constantly casting it on all enemies.

When your skeletons kill an enemy, you can then cast Corpse Explosion on them to make their corpse blow up, dealing great AoE damage to the other enemies in the vicinity of the corpse.

If your minion count isn’t at the max, you can use these slain enemies to either raise more skeletons with them, or use revive on them to turn them into your minions.

If it is at the max, continue using Corpse Explosion on them to keep dealing massive amounts of damage.

If you’re in an area where there’s a lot of corpses on the ground but also a lot of live enemies, then try to lure these enemies towards the corpses so you can easily kill them using Corpse Explosion.

This is the ideal rotation of this Summoner Necromancer build in Diablo 2 Resurrected. If you play the build like this, you’ll be able to get your damage to its absolute highest potential.