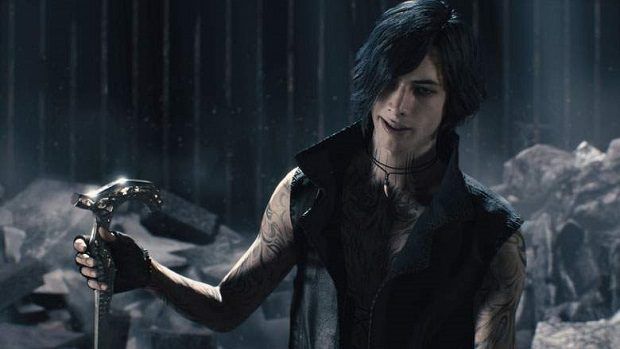 Devil May Cry 5 will come with three playable characters including the mysterious “V” character. There’s not much that we know about him yet but don’t worry as Capcom has promised to talk about him very soon.

We have seen the other playable characters like Nero and Dante in very much details through the recent trailers and gameplay. Leaving behind V who was first revealed in a trailer at the Tokyo Game Show 2018.

Hideaki Itsuno, director of Devil May Cry confirmed through a Tweet that they will talk about this new character before the start of 2019. This means we are going to hear about him in just 2 months so stay tuned.

Devil May Cry 5 is also expected to be shown at X018 conference or The Game Awards 2018 in December, maybe that’s when we will get to know V in detail.

As for V, he’s expected to be a mage type character. His fighting style is also going to be different than of Dante and Nero. Also, there’s going to be an option to choose whom to play within some missions.

Capcom also released a Devil May Cry 5 testimonial trailer recently and after listening to fans, it’s the best DMC game ever made. Fans were so pleased with the game, everyone said that the game packs everything they ever wanted. The graphics are also stunning and the overall gameplay is smooth.

The in-game boss fights are also harder than previous games so be ready for some grinding. Also, don’t forget to check out Devil May Cry 5 Ultra edition as it’s one of the most expensive editions ever. Ultra edition comes with Dante’s coat but it’s going to cost you 600,000 yen ($5300).

DMC 5 is also going to come with different alternative skins for Nero, Dante, Trish, Lady, and Nico. V is not among them but we are sure that he doesn’t need one. Dante’s alternate skins are inspired by DMC and Nero’s are inspired from Devil May Cry 4.

There’s no doubt that Devil May Cry 5 can turn out to be the best hack and slash game of the current generation so don’t forget to grab it when it releases on March 8, 2019, for PS4, Xbox One, and PC.