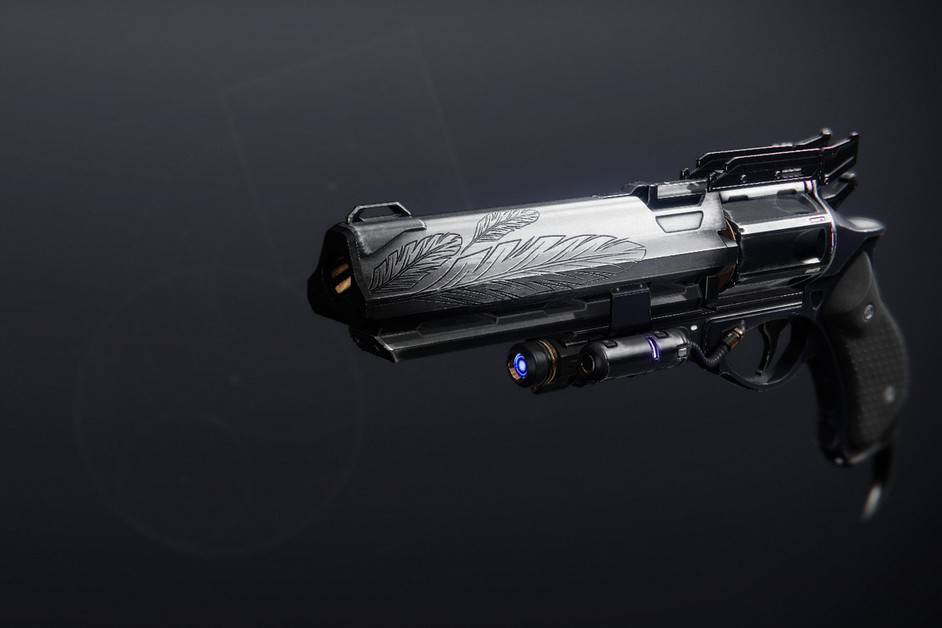 The Hawkmoon Exotic Hand Cannon is a heavy pistol that has serious damage in close to medium range. It also features a perk seen in Destiny, ‘Transformative’.

After you obtain the hand cannon for the first time, it can be obtained again from Exotic random drops.

Details of the Exotic Hawkmoon Hand Cannon are below.

Getting the Hawkmoon
To get the Hawkmoon Exotic Hand Cannon, you need to complete two quests, first one is named ‘As the Crow Flies’ and the second one is called ‘Let Loose Thy Talons’.

In this guide, we will explain in detail how to complete these quests and get the Hawkmoon Hand Cannon.

As the Crow Flies

To start your journey to get the Hand cannon, go and talk to Spider whose lair is located in Tangled Shore.

Start the quest by picking it up from his inventory. In this quest, you need to help Spider by collecting 5 Paracausal Feathers which are golden-colored feathers. Below we have listed locations of all five feathers.

Feather Location #1
The first feather is located in Tangled shores, outside Spider’s lair. The feather will be on top of a Fallen box left from the Spider’s lair.

Head towards the forest and then on the left, you will see a broken building structure.  The second feather can be found on the ground of the broken structure.

Feather Location #3
The third feather is located in the bottom part of the Steppes in Cosmodrome. When you land in the Steppes, head right from the landing zone to find a concrete pillar. The feather is present on the top of this pillar. You will have to climb it to get the feather.

Feather Location #4
This feather is located in Divalian Mist in Dreaming City region. In Divalian Mist, drive to the main gates of Blind Well. On the gates, there is a pillar on the left side on top of which is the fourth feather.

Feather Location #5
The fifth and last feather you have to collect is located in Moon landing zone in Shrine of Oryx region. When you arrive in Moon, head left to Archer’s line.

On your way, head into Moon using the doorway present in the zone. In Moon, there is Shrine of Oryx which is your destination.

In the shrine, there is a small room underground and in this room, you will find the feather next to the stairs.

After you have collected all 5 feathers, return and talk to Crow back at Spider’s Lair to finish the quest.

After you have collected the feathers and returned to Crow, he will give you this quest. First you will have to complete task ‘Cry from Beyond’ in the European Dead Zone.

When you reach the effigy of Hawkmoon with crow, pick up to end this quest and start ‘Let Loose Thy Talons’ quest which is our main focus.

In this quest, you will be tasked by Crow to charge the Hawkmoon effigy you picked up in Cry from Beyond.

To do that, play Kingship Dock Lost Sector located in Tangled Shore until you have collected 50 Orbs of Power.

After you collect 50 orbs from Kingship Dock, head back and talk to Crow. He will now ask you to investigate the coordinates in European Dead Zone.

Head to the objective marker in Trostland, EDZ and go to the abandoned building. You will have to commune with the bird and collect the feathers which show up to you in-game.

The commune with bird will end up in the boss room. Defeat the boss to obtain the last feather and then go to Tangled Shore to talk to Crow.

Again, he will assign you a task and this time, you will have to kill 200 Guardians or some Champions. Guardians and Champions can be found in different sectors and weekly missions.

After you are done with the kills, return to EDZ and talk to bird and after the dialogue, you have to complete a different version of ‘Cry from Beyond’ mission.

This time, enemies will be glowing which will drop orbs needed to get the exotic Hawkmoon Hand cannon drop.

Once the hand cannon is dropped, you will have to fight and defeat the boss to finish Let Loose Thy Talons quest.