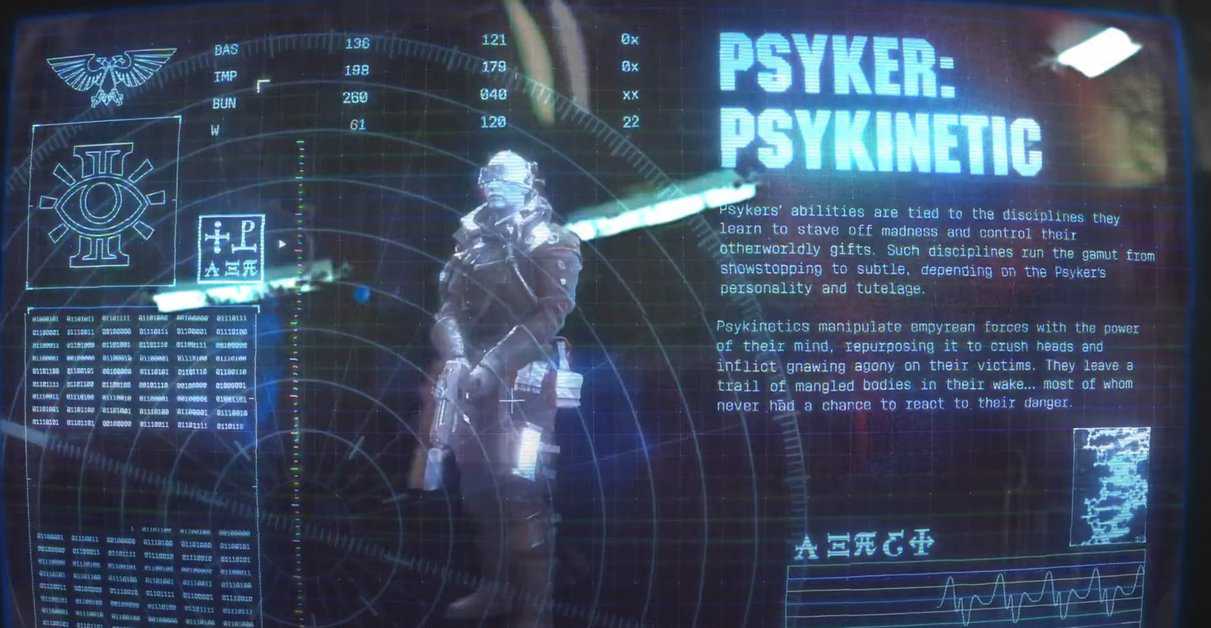 Playing as Psyker in Darktide is definitely tough since early gameplay hours can be overwhelming. However, it is a character worth putting time into since it pays off in the end. Eventually, with the Psyker builds for Warhammer 40K Darktide we have designed below, you’ll be harnessing the warp in no time.

So, without further ado, let’s take a look at one of the most OP builds for Psyker in Darktide.

These are the suggested weapons and feats that the players should opt for while they are leveling up their Psyker in Darktide. The perks are perfectly aligned allowing the players to level up, while also giving them enough time to explore the class and understand its basics.

Moreover, the suggested weapons trigger your perks from time to time, creating a smooth and fun gameplay.

The first choice for the primary weapon should be the Force Sword, since not only does it deliver a charged warp attack, but it also triggers multiple of your equipped feats in this build. This weapon is extremely strong and works best when the battlefield seems a bit overcrowded and requires a quick cleaning.

As for your secondary weapon, it is recommended to choose the Accatran MK II Recon Lasgun, which an extremely high firing rate. The faster firing rate will increase your chances of triggering the brain burst effect, however, its short clip might hold you back.

As for the feats, here are the following you should be investing in:

The first feat you should acquire is Quietiude, since it’ll allow you to receive toughness for each 10% peril quelled.

Your next feat should be Inner Tranquility, since I’ll allow the player to receive 6% peril resistance per warp charge, which will help new players understand how peril works.

Thirdly, you should get the Cerebral Lacerations, which is activated when a player uses their brain burst on an enemy, causing them to take an extra 15% damage from all non-warp sources nearby. These non-warp sources could be your own teammates as well, unless they’re psykers just like you.

If you’re pairing up the force sword and force staff, then it is better to stick with the Mind in Motion feat since it will allow you to retain your original movement speed while quelling peril.

The fourth feat you should get is Kinetic Overload. This feat is activated if a player has the maximum amount of warp charges, which will apply 4 stacks of soulblaze on nearby enemies, instead of gaining another warp charge. Added to that, this feat specifically targets the elite enemies.

Lastly, you should get Kinetic Barrage since this feat will allow the player to charge their brain burst 25% faster. This consumes 50% less peril 10 seconds after using Psykinetic Wrath.

This endgame build is the most overpowered build available for the Psyker class in Warhammer 40000 Darktide. As can be expected, this build requires players to have reached level 30 with the Psyker and mastered the class.

It allows the players to pop heads in the blink of an eye, and grants you complete crowd control even in the toughest scenarios.

The weapons loadout would be the same as the one discussed in the leveling build since it pairs up nicely with this head popper build as well.

So, taking a look at the feats, here are the ones you should have equipped to create the best endgame build for the Psyker Class.

The first feat is Warp Absorption, which replenishes 20% toughness when you kill an enemy with a warp attack. In simpler words, this feat unlocks a safe and reliable way of replenishment of toughness for the player.

Wrack and Ruin will allow the players to deal two stacks of damage to multiple enemies scattered in the battlefield for a short period of time. Killing an elite or specialist with brain burst applies soulblaze to nearby enemies.

Unlocking Cerebral Lacerations, allows the player to deal an extra 15% damage to their opponents when they use their brain burst attack, through any non-warp sources nearby. These non-warp sources could be your own teammates as well, unless they’re psyker just like you.

Through the feat, Kinetic Shield players will take 10% and 33% reduced toughness damage from ranged attacks, depending upon the amount of warp charges they possess.

So, when a player has collected enough warp charges, it greatly reduces the toughness damage that they will take. This works especially well since toughness, unlike health is an infinite resource that automatically replenishes over time.

Coming to Kinetic Flayer, it’ll allow all attacks to have a 10% chance on hit to brain burst the target. This cannot occur while at critical peril and has a cooldown of 15 seconds. This ability is what makes this build outshine, however the 15 seconds cooldown, is what holds this build back.

Lastly, Ascendant’s Blaze allows players using Psykinetic’s Wrath to expend all warp charges, while applying stacks of soulblaze to their opponents. The hits will be based on the number of warp charges that are expended.

This feat will allow the player to have a 10% increased chance of getting a warp charge if the enemy is killed through their soulblaze effects.