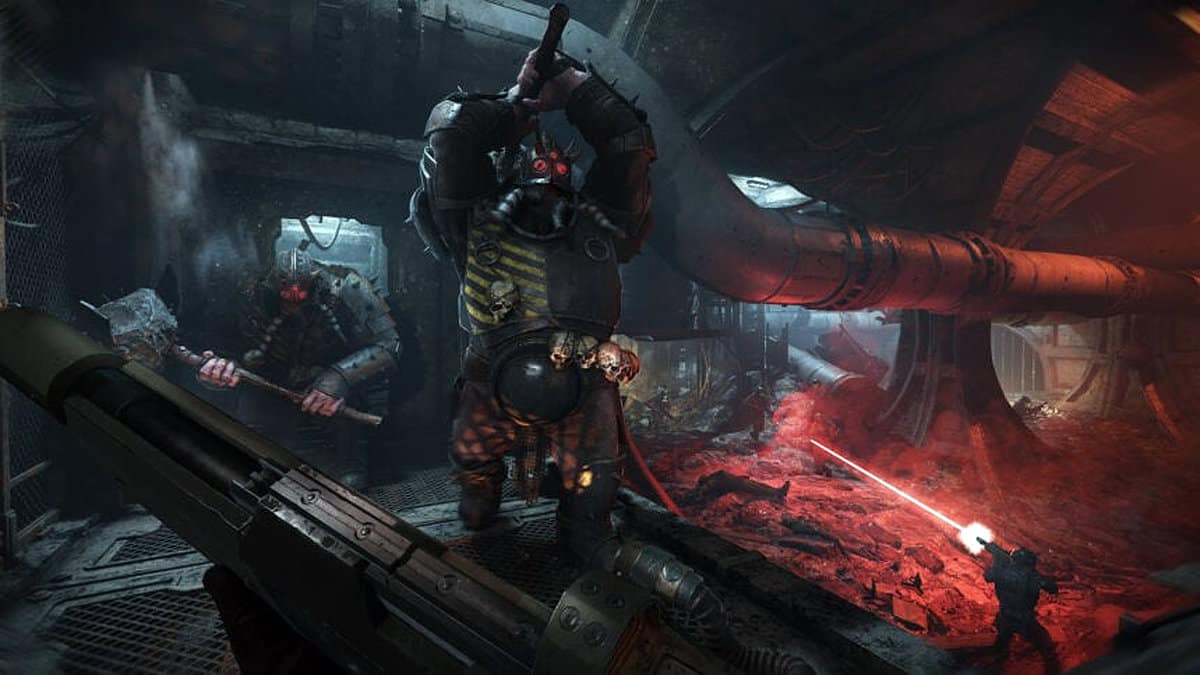 There are a total of four classes in Warhammer 40K Darktide. Each class specializes in a different style of combat and equips a distinct set of weapons.

Knowing which weapon suits the playstyle of a particular class is an important aspect of the game since it decides how the class will survive in combat against enemies.

In this guide, we have given the best weapons to equip for each class in Warhammer 40K Darktide.

Ogryn is the tankiest class in Warhammer 40k. Being one of the heaviest classes in the game, it specializes in a unique set of weapons.

The major attribute that differentiates them from the rest of the classes is that the weapons they wield can’t be equipped by any other class, making the Ogryn class quite distinctive in nature.

Slab Shield and Battle Maul may not be your typical damage-dealing primary weapons, but the power attack crowd control they possess is certifiable.

Furthermore, the special will allow you to tank anything coming in your path. Making them the best choice for melee Ogryn weapons and can be unlocked at level 11.

This Ripper Gun is an absolute killing machine when it comes to 2-shot kills in Warhammer 40 Darktide. The Foe-Rend MK II Ripper Gun is a heavy automatic shotgun that is capable of knocking down Carapace Armored Enemies with minimum numbers of ammunition used.  You will unlock this weapon at Level 3.

The Zealot class primarily focuses on melee attacks. Their abilities help them survive longer in fights against a group of enemies.

This class will stand toe-to-toe with their opponents and with the help of the dash they wield, they will close the gap between their targets and deal critical hit damage.

Crucis Mk II Thunder Hammer is purely a power weapon. Mostly you will be using this Hammer for close combat to shatter the bones of your enemies.

This weapon provides an additional 8% Melee Critical Hit Damage, and with its Heavy Attack Relentless, you can break any armor put against you in a fight. You will unlock this Thunder Hammer at Level 25.

Flamers have always been an iconic figure in the Warhammer series. Using them the Zealot will deal tremendous amounts of damage to their opponent. The best part about this weapon is that it doesn’t have an overheating feature in it.

Meaning, you can use it for as long as you want and go on a complete killing streak with its 15% Damage to infested enemies. You will unlock this weapon at Level 13.

Psyker is the most intellectual class in Warhammer 40K Darktide. They possess psychic abilities and are sometimes referred to as witches due to their sorcery. Their main source of power comes from the realm known as the Immaterium.

The Maccabian Mk IV Dueling Sword is one of the lightest weight swords in Warhammer that provides Navy commanders, and Rogue Traders an upper hand on their opponents during a close encounter.

This sword is highly mobile and possesses a high damage and finesse rate. You will unlock the Maccabian Mk IV Dueling Sword Pre Level 10.

Although this Force Staff doesn’t have much damage to hit, it can still be quite helpful in tough situations. Using its Focused Channeling, you can perform your secondary attack without any interruptions. Plus, it provides you with an additional 6% Weak Spot Damage. You will unlock this staff at Level 15.

Veterans are the most respected class in the Warhammer 40k Darktide. They are trained especially for ranged combat and will do anything they can to defend the honor of the Imperium against the enemies, making them an Elite class that can face other Elites and Specials.

Using its Rev it Up ability, you will receive an additional 10% Movement Speed for 2 seconds on Weapon Special Activation. This weapon is unlocked at Level 10 for the Veteran class.

The M35 Magnacore Mk II Plasma Gun possesses a high Magazine, Sniping Potential, and Charge Rate. Using this Plasma Gun, you will gain an additional 4% chance of a Ranged Critical Strike. Plus, gain a 3% Critical Chance using its Gets Hot! Ability. This weapon unlocks for the Veteran at level 16.