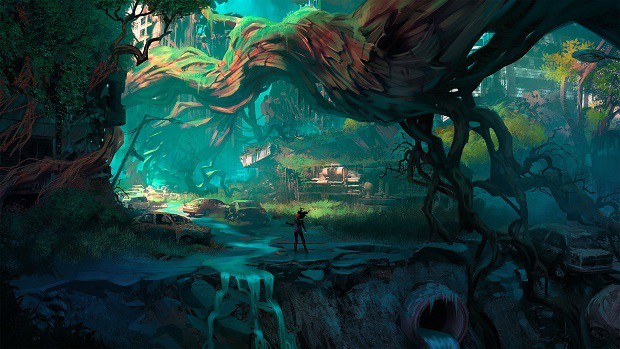 Darksiders III has some of the weirdest puzzles in any game, and THQ Nordic did tease these puzzles around a lot.

Of course, the game is still not what y’all expected, but some of the puzzles in the game just are not very easy to solve. Our brave adventurer Arslan was stuck on one of these too, spent several hours and finally rage quit.

We do not want other people to quit, just like Arslan, so we have crafted a mega guide on all the puzzles that can be found in the game and how to solve them.

Of course, our guide will be as concise as possible, to make it easy to read for you: our friends and fellow gamers.

The most common type of puzzles in the game are the Web Puzzles. There are quite a lot of paths in the Darksiders 3 world that have been locked out by these colored webs that are apparently resistant to anything except extreme heat.

Thankfully, there are two ways to deal with these webs:

We will be discussing these methods briefly and some of the puzzles that might be a bit confusing in the Web Puzzles genre.

Some of the puzzles that can be solved through these methods include Hatchling Cesspool’s Webs Puzzle, Splintered Station’s Webs Puzzle Well, then, without further ado, let us begin:

Flaming Goo
Flaming Goo is basically some sort of lava stored up in a bag of corruption? I dunno. Uh, Flaming Goo is the easiest to approach method and you do not need to complete any tasks, unlike the other Flame Hollow Form method.

There are four basic steps to this method:

Do note that in the Splintered Station’s Web Puzzle, the Flaming Goo will not be in the normal red color. Instead, it will be colored purple. No other difference should be noted in that puzzle.

Flame Hollow Form
You can obtain the Flame Hollow From from Lord of Hollows. Once you obtain this form, you can easily raze these webs to the ground, with just the click of a button.

Press your secondary attack button while having the Flame Hollow equipped and facing towards webs. That is it. Isn’t that fun?

There is a weird puzzle end in the Crossroads portion of the Haven area. I would call it a fake dead-end because that is what this is.

Anyways, you can use the Flame Hollow form to burn it down, but that might not be very much possible this early in the game. You can use the ‘Flaming Goo’ method here.

A bug will spawn in this very same area and will chase you down without really trying to hurt you. Find a Flaming Goo bag on the ceiling, shoot and destroy it. Flaming Goo will drop down on the floor.

Throw the insect towards the Flaming Goo and it will eat it up like its Scooby Snacks. Pick the shiny Flaming insect up and throw it towards the web. This puzzle is also called the Splintered Station’s Red Web Puzzle.

Things to Note
There are two web walls in here and are blocking the path in conjunction.

You must destroy both web walls at once, within an interval of no more than a few seconds. If you fail to destroy any of the walls in a small interval, the other wall you destroyed will regenerate.

To fix the problem of regeneration, try to find two insects in the room. You can find one near the wall, while the other one should be somewhere close-by.

Perhaps the most annoying puzzle in the guide is the Hollow’s Catacombs Puzzle. This Puzzle will only require one thing from you: timing. There are four things in the room you should keep a note of:

Here is the step-by-step tutorial on how to solve this:

Once you take care of the Brood Mother, you’ll access this puzzle. First and foremost, grab the Bomb Bug from below, go through the Tunnel and take it to the other Bug. Once done, you’ll notice the bug eating is now red. Meaning, its explosion time!

Now, at this point you must grab this bug and throw it straight at the Red Web. This way you’ll destroy it and you can focus on your next assignment.

For your next assignment, you must grab the other bug that is in a explosion state, and throw it in the White Web.

You’ll face something that prevents you cross a Bridge in the Hollows. If you look clearly, you can spot a giant statue on the opposite platform. Simple jump onto it and jump again while hitting the web on top the statue.

Upon doing this, the sword held by the statue changes color, but we need one more sword to do the same so, head to the right side of the area and hit the sword to change colors. Doing this activates the Bridge.

Traveling across a pitch-black area will lead you towards a room. You’ll find a sandwich dropped on the floor there. You’ll also come across multiple Skellies.

Take care of them and move forward to come across few skulls in the way. Smash them and keep moving forward till you reach a Block.

Use your hammer to move it and push the block on the switch on the floor. This way you’ll activate one more sword statue on top. The last thing to do is use the Salvation to hit the three Statues and turn them red.

Making your way to through the Station, you’ll come across a Train Car. The Train Car is seen at the center of few Purple Rocks accompanied by 2 Spider Fiends. You can use your hammer to smash the rock. Scaffolding can be seen above with an item on top.

All you need to do here is to hit the car to the scaffolding and climb it. Once you reach the top, grab the item and pull the lever on this path.

Go back to the car and witness Green lights instead of Orange. Hit the Train to the other side and climb to the top.

During your search in Scar, you’ll come across a Bridge. Simply head down from the Bridge and reach a Purple wall with a Purple cling on it.

Head to an even lower area and you’ll come across another Purple wall. Smash it and enable its Wheel. Move up and hit the wheel to cross the bridge to the other side.

While still in the Scar, you’ll come across your second Wheel puzzle. This time you need to head up to hit the heel using the ‘Strength / Purple’ form so that it spins.

Don’t lose hope and continue the hits till its move to the other side.

The last Wheel puzzle you’ll find. This is an easy one since it also requires the use of ‘Strength/Purple’ form. Simple hit the Wheel till the other side adjoins with the Ice one.

Now head up with the Ice form and swing to get on the other platform. Use your Purple form to hit the wheel and once hit, freeze the wheel.

Now, swing on the pole you just made and make your way to the elevator.

Making your way through Scar, you’ll find this Puzzle. You’ll find three things. A Switch, Block and Water. Stand on the switch and wait till you see a Block. Get off the switch once it hits the gate.

Once that’s done, move towards the water and leap on to the ledge and come across a switch. Use the switch unlock the gate. Switch to Ice form and freeze the water by running through it.

Switch to Purple form and hit the block with your hammer and see it move to the other side.