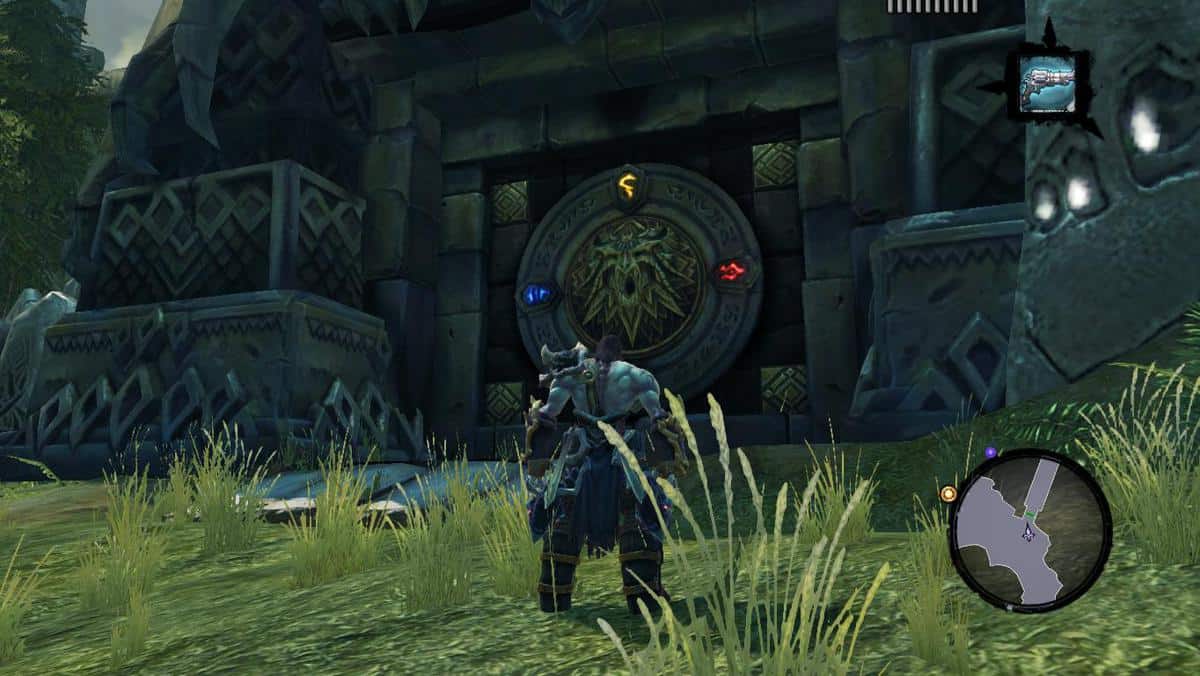 The Argul’s Tomb DLC for Darksiders 2 is finally here, and we’ve decided to compile a little guide to help you loot these burial sites for all they’re worth. This guide focuses on Darksiders 2 Argul’s Tomb: The Frigid Spire site.

The Frigid Spire is the tower located to the north of where Ostegoth, and the Serpent Tome are in the Argul’s Tomb DLC.

Proceed forward and you’ll find a room with a statue missing its lantern. Keep going north and kill the few enemies you find. Return to the doorway halfway down that hall and activate the portal against the far wall.

Walk to the eastern end of the hallway and shoot a charged shot at the portal facing upwards in front of you. Jump at the pillar it sits on and go through the portal, then fight the enemies that wait for you there. After taking care of business, equip your Death Grip and jump back through the portal.

Quickly, Deathgrip the hook in front of you when you pop up out of the portal, then pull yourself onto the nearby ledge to find some enemies frozen in ice. You can kill them now or later. There’s a locked door requiring a skeleton key and a locked gate on the northern side of this room. Head down the stairs near the southeast.

Keep going along the path, and pay no attention to the other route you come across with the pressure plate that would take you back to the statue, we’ll come to that later. Eventually, you’ll come to another hallway with a pressure plate on the floor in front of you. Stand on it and once all the metal bars are pulled back, activate the portal at the end of the eastern hallway with the Voidwalker.

Go straight north and you will be attacked by a couple of enemies. After killing them, the iron bars blocking another portal will drop, and you can activate it. Go through it and head north. There are two more portals on the western side of this room, one of them being in front of a wooden beam hanging from the ceiling, and the other being just above a Death Grip hook.

Shoot the one above the Death Grip hook with a charged shot, and then activate the other one. Use the Death Grip to pull yourself into the first portal and land on the wooden beam. Immediately jump back into the portal, and you’ll be launched onto a new ledge.

Keep on going and you’ll enter a room that locks you in with some bad guys. Take care of them all and continue to a balcony with yet two more portals on the ground and a large movable block.

Activate both then move the block so that it gets sucked into one of them. Climb the wall on the western side and Death Grip the block as it flies up. Move the block over to the northern wall so that you can climb up, and then pull the lever to unlock all the gates below you.

Drop down from the ledge you come out onto and then return to where the western part of the path containing a pressure plate and a single set of metal bars, which allows you to return to statue. Set the lantern down on the pressure plate, walk past where the bars are, and use the Death Grip to pull the lantern to you.

Give the lantern back to the statue and rotate it so that the light is being shot at a portal. Activate that portal and then walk over to the western wall of this room and look outside. You will see another portal on the left-hand side which you need to activate. Doing so will unlock another door. Head through the door and run along the walls to traverse the gap. Loot the chest to your left and move on to the next room.

Walk into the room with all the frozen enemies, and open the chest on the northern side to get a skeleton key. When you grab the key and walk back, the enemies will come to life.

Fight your way through all of them and continue on your path, pulling the lever to drop the gate in front of you. After unlocking the door with the skeleton key, you will see a brief cinematic and face the boss of the Spire, Frostbane. Finish him and you’ve completed the Argul’s Tomb DLC.

Frostbane is a dragon, meaning he will perform both aerial and ground-based attacks. He uses the following moves

Swipe: Frostbane does a powerful swipe on you if you get too close to him.

Charge: When he performs his ‘Charge’ move, he runs on the ground and charges straight towards you, and then does a few swings.

Ice Shower: With this move, he shoots up in the sky and throws down a bunch of little ice projectiles. When he does this move, blue circles will appear on the ground indicating where the projectiles will strike.

Ground Slam: With the Ground Slam move, he climbs up impressively high and dives right onto you.

As stated previously, Frostbane will perform both grounded and aerial attacks. When he gets on the ground, that is your opportunity to hurt him. You have to watch out for when he is about to perform one of his moves; only attack when you are certain he isn’t about to do one.

When you hurt him, he will back off and perform his Ice Shower move. When he does this, do not bother trying to damage him, as you literally cannot. Run away and get cover.

When he performs his Ground Slam attack, you need to dodge 2-3 to get far enough away from where he will land. If he hits you with this attack, you will be frozen.

Just remember all these tips and fight very cautiously. Doing this whole process about 4 times will most likely eliminate him.

After you defeat him, go back to Ostegoth and a quick scene will play, after which you will receive a message telling you that you have gotten an item. Check the Serpent Tome and acquire your Legendary Secondary Weapon, the Frostforge Twins.

You have now completed the DLC.