Darkest Dungeon Provisions & What They Do 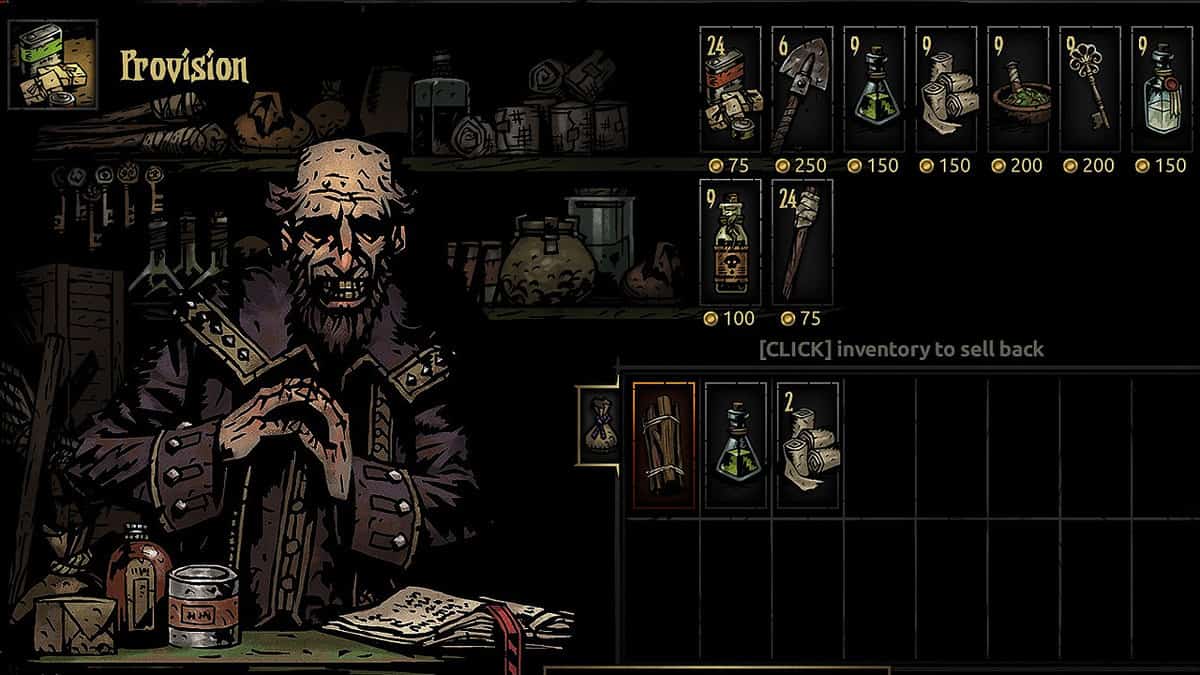 Provisions are consumable items that you purchase from the Caretaker before entering every dungeon or starting any mission or quest. They are part of the preparation phase in Darkest Dungeon where you set up a party of heroes, their skills and trinkets, and such.

You need gold to purchase provisions and during the early game, they can prove to be pretty expensive. The provisions you need depend upon the dungeon you are entering, its enemy types, and its curios.

In addition, any provisions that are unused will be refunded after returning to Hamlet but at a reduced cost. Hence, to save precious gold, it is smarter to only purchase the recommended dungeon provisions.

There are over a dozen different provisions in Darkest Dungeon, each having a unique effect and use. The following guide will help beginners understand what each provision does in the game.

What every provision does in Darkest Dungeon

Your heroes can eat Food to heal in small amounts. Their main use, however, is to defeat hunger, another survival mechanic in the game.

Every dungeon has a chance to spawn a hunger event tile. These are hidden from you even if you have a high scouting chance. If you walk across that tile, your heroes will become hungry and immediately require Food.

If you do not have enough Food, all of your heroes will suffer a significant amount of health and stress damage.

Some dungeons have obstacles that block your path. You need Shovels to clear these obstacles. You can also clear obstacles with your hands but at the cost of great stress damage to all of your heroes.

Shovels are also needed to interact with certain curios like Shallow Graves in Weald and Giant Oysters in Cove.

Some enemies apply blight to your heroes, a status effect in Darkest Dungeon, for poison damage at the start of every round. You can use Antivenom to remove blight from any affected hero.

Antivenoms are also needed with certain curios like Old Trees in Weald and Brackish Tide Pools in Cove.

Bleed is another status effect like blight. Heroes affected with bleed will continue to take health damage at the start of every round. You can use a Bandage to cure such heroes of bleed.

Bandages are also used to interact with certain curious like Rack of Blades in Warrens and Eerie Spiderwebs in Weald.

They can also be used with certain curios like Alchemy Table in Ruins and Beast Carcass in Weald. Unlike other provisions that give random loot after interacting with curios, Medicinal Herbs have a high chance of giving you Food.

Skeleton Keys are strictly used to open curios like Locked Display Cabinets in Ruins and Locked Strongboxes in every dungeon.

Do note that you can still open the curios but at a risk of triggering a trap. Using Skeleton Keys removes that risk while also giving you double the loot.

Your heroes can consume Holy Water to increase their resistance to bleed, blight, and debuffs. It is always smart to save 4x Holy Water for a boss fight at the end of a dungeon.

Holy Water is also needed for some of the most important curios in Darkest Dungeon like Eldritch Altars that remove a random negative quirk, Altars of Light in Ruins that increase your damage by 30 percent, and Confession Booths in Ruins that heal up to 30 stress damage.

Laudanum helps remove horror status effects from a hero. Horror forces your hero to take stress damage at the start of every round.

There are only a few enemies in the base Darkest Dungeon game that can affect your heroes with horror. These are mainly Madman, Ghoul, and Squiffy Ghast.

If you have The Crimson Court DLC, however, you will face a lot of enemies that inflict horror.

Torches are your main provision to have in Darkest Dungeon. They increase your light levels by 25 points each.

While there are some important curios like Piles of Scrolls in Warrens that remove one negative quirk, Shambler’s Altar is the only curio that you will need a torch for to trigger a battle with Shambler, one of the mini-bosses in the game.

Note that in The Crimson Court DLC, using a torch will give your party an accuracy buff for a single battle instead.

Firewood is automatically added to your inventory for medium and long dungeons. You use Firewood to make camp in a dungeon room to heal and buff your heroes.

While you cannot remove Firewood at the provisions screen, you can lose them inside a dungeon either accidentally or intentionally. You will want to keep them since running long dungeons without making camp can be difficult.

You will automatically get 2x Dog Treats if there is a Houndmaster in your party. You can consume Dog Treats for a massive 50 percent damage and a 15 accuracy boost that lasts three rounds. Make sure to save them for bosses.

The Blood is a provision exclusive to The Crimson Court DLC. Unlike other provisions, you can only loot The Blood inside dungeons. You cannot purchase them.

You consume The Blood to buff your heroes affected by the Crimson Curse. The buffs vary and depend upon the stage of the curse of a hero.

Take note that any unused Blood in your inventory that you bring back to Hamlet will be available for use on your next mission or quest.

Like The Blood, The Cure is also another provision in The Crimson Court DLC that only be looted, not purchased.

You use The Cure to remove the Crimson Curse from a hero. You can only loot The Cure from the Fanatic, a human-type boss that you can encounter by chance like the Collector.

You need The Shieldbreaker DLC to unlock the Shieldbreaker (a new hero class) and the Aegis Scale item. This provision gives your hero the ability to block any single enemy attack that deals damage, giving you a massive advantage against hard-hitting bosses.

You cannot purchase Aegis Scales. You can only loot them from Pliskins, Rattlers, and Adders during the Shieldbreaker’s nightmares.

Any Aegis Scales you bring back to Hamlet will be stored for use on your next mission or quest.