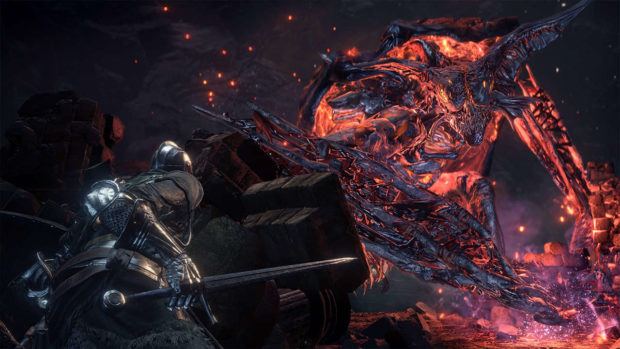 Dark Souls 3: The Ringed City Earthen Peak Ruins walkthrough will guide you through the entire area and will help you with defeating the Desert Pyromancer Zoey and the Demon Prince.

City Earthen Peak is a dangerous and kind of a puzzling area where players can lose their way if they are not being careful. You will face your first boss fight of Dark Souls 3: The Ringed City DLC and you will be fighting two bosses at once.

Players will come across the Earthen Peak Ruins after going through Dreg Heap. The area has plenty of challenges to keep you engaged.

Earthen Peak Ruins
When you start off at the bonfire, go up top of the fallen windmill to battle a few mushroom insects protecting some Black Firebombs.

Then, go back to the bonfire, and head to the ledge on the right to find Lapp, the NPC you met before. He will tell you about some treasure buried in a deadly swamp. If you return back to Lapp, he will gift you with a Titanite Slab.

Now, head down and you will encounter one of those angel creatures. You can easily go around them and reach the Twinkling Titanite by heading to into the tree roots to your right.

After that, head back and stick to the left and run from cover to cover, avoiding the angel’s projectiles.

As you grab the Titanite Chunk hang there for a bit and the angel will float a bit farther away giving you the chance to run to the barn just across from you.

From there run to the large rock and make your way to the crack in the wall. Also, watch out for a swift, axe-wielding enemy inside.

There is an Ember present close by, be very cautious when grabbing it so you don’t get clipped by a volley. There is another Titanite Chunk which you can get by dropping down; but it isn’t worth it as it’s very dangerous there.

Rather than returning back through the crack, head up and over. Ahead of you, you will see a toppled tower, which has a Titanite Scale inside.

At the ground level in the swamp area, there will be a hut is a Purple Moss Clump across from you. Be careful of the curse damage from the angel above as you fight your way through.

As you enter, look at the ledge up on the corner to your right to find Desert Pyromancer Gloves.

Drop down into the swamp and run to the mushroom things close by to get a Desert Pyromancer Skirt. Run across the swamp to the left for a Large Soul of a Weary Warrior.

Keep going ahead to get a Loincloth, which is surrounded by mushrooms. From where you entered there will be a mangled tree root opposite of that. Use it to go up, then jump down to find another Titanite Chunk.

Go up there again and If you make it to the end then you will be rewarded with a Ring Of Favor. Now, jump down and run towards the root ahead of you.

Go up the root connected to it and get another Titanite Chunk. If you jump down close to the top of the root, you will find a Harald Curved Greatsword.

Before you start fighting her, jump down on top of the roof behind you and kill the low-lever enemies, then get to the opposite roof using the roots.

You will find an enemy fused with the roof there. Kill this enemy to acquire some Twinklink Titanite to disable the angel.

Now, prepare for the battle and head inside the cave. Desert Pyromancer Zoey will throw fireballs at you, will use a flame spell, will conjure a flame sword and also uses a whip. She will also heal with an Estus twice.

Just take out the two other enemies accompanying her and Desert Pyromancer Zoey is pretty simple to defeat on her own. You will be awarded with the Flame Fan Pyromancy for defeating her.

After you defeat her, get the Desert Pyromancer Hood and run along the root ahead while avoiding the angel’s projectiles until you can drop down right at the end and get the Divine Blessing near the corpse

Head down to another root curving around until you see an item sitting by a corpse on a rocky ledge ahead. Clear the area and head back up the root and walk up the overturned building to your right all the way to the top. Peer down into its broken insides and you’ll see a bonfire below. Drop down and light it.

From the bonfire step out onto the farthest edge of the toppled structure and drop down. It is a long drop and you will be safe while dropping. You will encounter your first boss fight in this very area and there will be two of them. Both of them are pretty similar in regards to attack patterns.

Demon Prince Boss Tips
Once these are done it is time to face the Demon Prince. This is a similar boss fight as the two before but this one will sometimes take flight. When the Demon Prince takes flight roll towards it to protect yourself from its projectiles.

The most devastating attack the Demon Prince can deal is raining fireballs and it is very difficult to foresee when this attack will come, so try and save the healing items for The Demon Prince’s final form.

Once the Demon Prince has been defeated use the Small Envoy Banner at the edge and you’ll be flown to a new area. When you land, head downwards and you will find a bonfire, light it up and rest there for a while.

That is all for our Dark Souls 3: The Ringed City Earthen Peak Ruins Walkthrough with tips on how to traverse through the are and defeat the Desert Pyromancer Zoey and the Demon Prince.