Cyberpunk 2077 Devs Don’t Want You to Join Any Faction 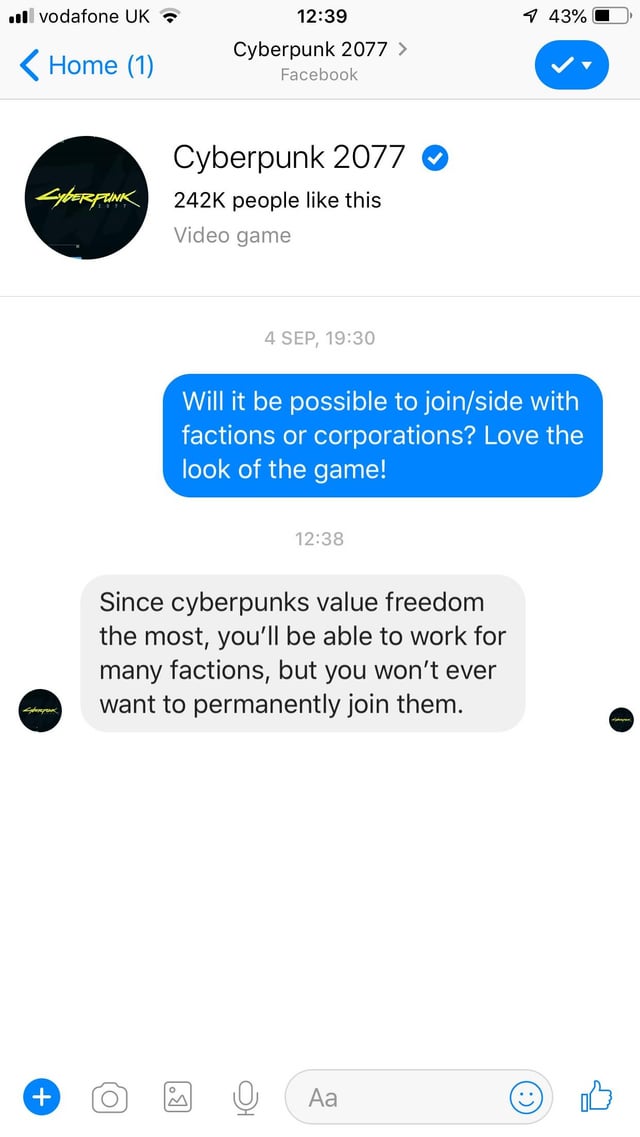 A recent post on Reddit revealed a user who got a response from Cyberpunk’s official Facebook page. When asking about how the faction system in the game would work.

Cyberpunk responded with how the player would have the freedom to join any faction they like. As a Cyberpunk, however, they won’t want to permanently stay in any. Due to the game’s emphasis on freedom.

The developers behind Cyberpunk, CD Projekt Red are known for giving the fans what they want. This was the case with their hit title, the Witcher 3. Which propelled the company into new heights of fame and adoration. So, of course, it’s no surprise that they would want us to play the story the way we would like to. This is granted to us by the choice of freedom among factions or even independence in Cyberpunk 2077.

This feature’s importance cannot be stressed nearly enough in regards to how much RPG games need it. So far, we already know that Cyberpunk 2077 will be an open world game in a rather gritty setting. And that you can create your own character to experience the story with.

Factions are a significant component of a lot of games, especially RPG ones. They serve as an insert for players to take sides that they please, and to have a part in the game’s political aspects. Simulating belief in a side’s goals against another. Like the old Stormcloak vs Imperial war of Skyrim. Or a large number of factions games like Fallout New Vegas offered.

An important aspect to have besides just factions existing is to allow a choice between them. An even rarer aspect is the ability to not choose any faction at all. Something I’ve seen New Vegas do the best, with how the Yes Man path was crafted. No House, Boomers, Followers, Legion or NCR. Just the Courier and his newly acquired Vegas.

Not only was it hella fun to throw General Oliver off the Hoover Dam after killing Legate Lanius, but it also felt amazing to actually feel ownership of the strip. To feel how much you progressed from a mailman being shot in the head, to the new king of a post-apocalyptic world.

Another thing this message Cyberpunk gave me, was a reminder of how Fallout 4 SLIGHTLY fell short on this factional choice. Not in a way of not offering enough choice, but rather not offering the right choice.

Fallout 4 (don’t worry, no spoilers here) sort of forces you to pick a faction by the end of the main story. Now while the factions did definitely have good diversity in their goals. It still felt lacking to not have that freedom to just do your own thing. Instead of having to agree with SOMEONE. This is something I’m hoping Cyberpunk delivers on, this freedom of choice. Which is very important.