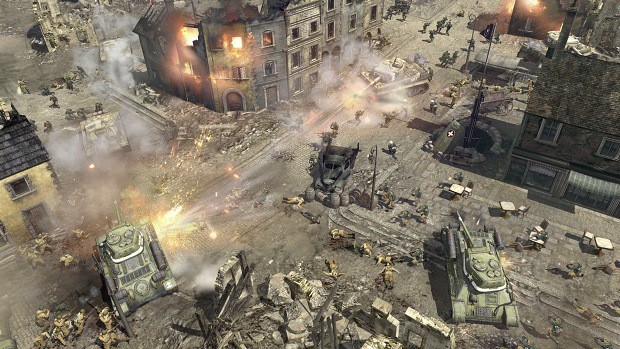 Relic is easily one of the best developers around. Homeworld, Dawn of War, Company of Heroes and Dawn of War 2 were all revolutionary games for their time.

Considering what they’ve accomplished over the years, despite an increasingly shrinking budget, it’s hard not to admire Relic and wonder what they could do with a Blizzard sized budget.

Unfortunately, it’s painfully apparent that Company of Heroes 2 is the most tragic victim of the THQ collapse. It’s not hard to imagine what the boardroom discussion of THQ might have looked like, when they were desperately trying to find ways to make a lot of money at no cost.

Probably in an attempt to copy Activision’s Call of Duty model, of releasing the same game with next to no actual additions to the game, Company of Heroes 2 was born.

With a budget so abysmally low that it staggers the mind, Relic sought out to try and do something new with the franchise to warrant a sequel attached to the name. And to their credit, Relic has found a way to add a huge new strategic element to the series.

Environmental hazards in the form of weather was a really smart way to add tactical depth without having a large budget. Unfortunately, I’m not sure it’s worth the $60 price tag, which leads us to the next problem…

It’s imperative that you buy this game.

When THQ was dissolved, SEGA picked up Relic. Owner of the Total War series, and now privy to the Warhammer fantasy IP, SEGA is very familiar with quality RTS games. If Company of Heroes 2 sells well, SEGA will be more apt to back Relic with bigger and bigger budgets.

If this happens, we could see a potential RTS revolution, with Total Warhammer and Relic’s Dawn of War series coming from the same publisher. A publisher with some fairly deep pockets, mind you.

Conversely, if Company of Heroes 2 doesn’t sell well, then SEGA is just as liable to give up on Relic and let them continue on with the THQ tradition of low budget games. So what’s it going to be?

Personally, I feel like I owe it to Relic to support them in their time of need. Especially considering they’ve given me hundreds of hours of enjoyment from their games over the years. Oh, and you get a solid game out of it, too.

Indeed, Company of Heroes 2 is as solid as its first installment in the franchise, seven years ago. It’s certainly a testament to how good the first game was, as the sequel is virtually the same game with a few added improvements here and there.

The campaign, being the most noticeable of the differences between the two games, is all over the place. Some missions are generic, others are incredibly engrossing, and a few of them were just plain fun.

Continuing with this tradition, the jumps between high quality cinematics and in game generated scenes was jarring and occasionally unintentionally comedic. Again, this is mostly a polish issues that originates from lacking a budget.

The story, however, was pretty decent. I really liked how it informed the gameplay, to really reinforce how brutal it was to be a Russian soldier during World War 2.

You should keep in mind that this is a fairly bleak storyline accomplishing exactly what it sets out to do. As a result, don’t expect much character growth, resolution, or emotionally engaging characters.

As the case with most Relic games, the audio is one of the strongest aspects of the game. The authentic Russian and German accents add to the atmosphere, but it’s really the musical composition that brings it all together.

Cris Velasco, a film composer, really brought a cinematic composition to the music. The Russian victory song alone is worth playing the game for.

But the real Rumtrüffel is the sound effects. Nothing gets me going like hearing, feeling a convoy of tanks purring as they trudge over the battlefield, launching shells into other, highly armored vehicles of destruction.

The roar of the howitzer, and artillery in general, is another wonder to behold. It certainly is a thing of beauty to hear the thunderous clap of a piece of artillery, as it fires volley after volley at your unsuspecting foes.

The long whistle and the subsequent explosion that follows never ceases to appease my auditory and visual pallet.

While on the topic of explosions, I must admit, Company of Heroes 2 follows in its predecessor’s footsteps, bringing in some of the prettiest, most spectacular particle effects.

The dirt that kicks up from a stray, or not-so-stray shot, which then rains down upon the ground is so pleasing that I can’t help but think that Relic makes games just for me.

Gameplay wise, Company of Heroes 2 is the same game that was released back in 2006. Keep in mind, that the first Company of Heroes is the highest rated RTS game of all time. So if you’re looking for drastic changes, there are none.

Instead, there are light changes here and there to smooth out the gameplay and add additional tactical options. If you missed out on the first Company of Heroes, you really ‘ought to see what all the fuss was about.

At the end of the day, Relic isn’t treading any new territory here – which is rare for them. I don’t hold it against them though, as they seem more victims of circumstance than anything else.

I hope followers of the series will go out and show SEGA that Relic, and its fans, are worth investing in. And I invite new customers to experience all the action and acclaim of the original, better.

We have an opportunity here to help convince a large publisher to strongly support one of the best development teams around.

Gameplay
It’s still the same game that was critically acclaimed all those years back. The problem is, seven years later, that’s not as impressive.

Graphics
The game looks very, very similar to the original. The fact that Company of Heroes 2 looks so good, is a testament to how ahead of its time Company of Heroes was. While the game certainly does look good, especially the particle effects, the in game cinematics attempted to do things that it simply couldn’t handle.

Sound
The only thing that comes close to Relic’s sound effect quality is the Battlefield franchise. Oh, and the music is very reminiscent of Star Wars – if, you know, Star Wars was set in Soviet Russia.

Presentation
The unfortunate side effects of low budget, often results in low presentation.

Value
There is a lot of game here. The campaign is around 10 hours, with a Theater of War to jump into after that. Then, of course, there’s the competitive nature of online combat.

Verdict
Buy this game, so that Relic can afford to start making revolutionary games again.

Buy this game, so that Relic can afford to start making revolutionary games again.