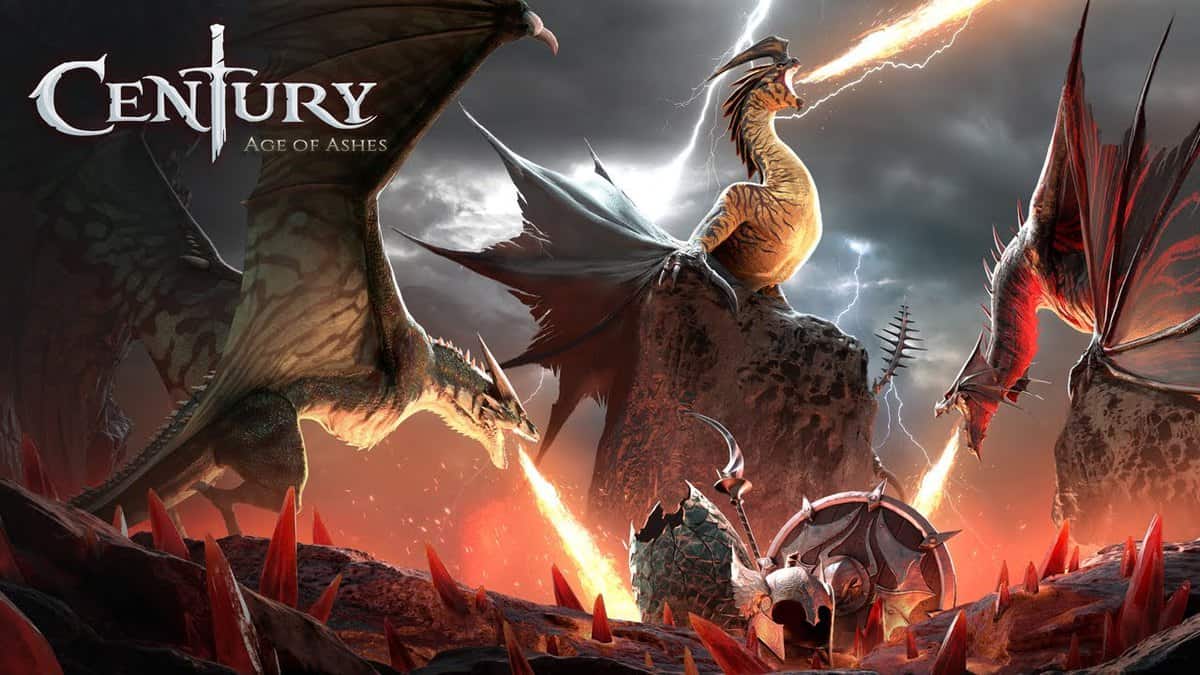 Century: Age of Ashes is a multiplayer dogfighting…umm…Dragonfighting game where players engage in high-speed, dragon-mounted battles! It features unique classes with their own playstyle, several game modes and lots of dragons. We were invited to a recent Preview and QA session for Century: Age of Ashes with the developers from Playwing Games where they showed off the progress they’ve made since Century’s beta tests early in the summer and discuss their ideas for the game and what they have in store post-launch.

When playing Century’s Rookie mode, we got a taste of the core mechanics of the game and could try out all 3 currently available classes. The core gameplay loop was pretty engaging and rookie mode really helped us get into the general gameplay.

“The goal of the rookie mode is to ease new players into the game before getting started right away with the matchmaking” explained a developer from Playwing.

We were told that this mode sticks around until you reach player level 5 and then becomes Skirmish mode. This mode is different from Rookie in that you start off with all your Class abilities instead of having them progressively unlock with the rounds in Rookie.

Century, at launch, will feature 3 different classes, however, we spotted the silhouette of a 4th class teased in-game. Playwing Devs didn’t offer any hints as to what this mysterious 4th class is, but we can assume it will fill in a unique role that the others don’t.

The Devs mentioned that bringing in new classes would be akin to the way hero-based shooters bring in new characters. We think it’s probably a tank role, but we can’t be sure till it drops. They also stated that “…each class should have their own archetype of dragon….” so we can expect new Dragons to accompany the new class (Future classes might have shared dragons though).

Speaking of Dragons, Age of Ashes is filled to the brim with many cool-looking dragons. There are different archetypes of dragons and each one you encounter is documented in a “Pokédex of Dragons” called the Bestiary that outlines details about different dragons and the lore.

Century seems to be working hard on its dragon lore and world, so we asked the Playwing developers if they are considering any single-player mode or story mode to showcase that lore.

It’s a really good question, of course, we have a strong universe so we can answer this question legitimately. For now, it’s a complete multiplayer game, so we try to expand our lore and try to explain it or try to tell stories, but we will not, at least for now, add any campaign mode or solo mode. we really want to focus on the multiplayer experience

While Century Doesn’t have a single-player mode (at least not yet) it does have some great multiplayer modes ready to play and some in the works.

Ranked will have an MMR system similar to other competitive matchmaking games. So, you’ll be sorted in a skill-based matchmaking system and gain or lose MMR.

The devs mentioned they would use the starting season (Season 0) as a baseline for the MMR and they also want to implement a rainbow 6 type of ranking reward system. They will also make patches and changes if a meta develops and becomes stale or unbalanced.

The devs emphasized that while ranked is important, they really also want to preserve the arcade/casual side of Century: Age of Ashes as well.

On asking the devs what they have planned for future game modes, they mentioned that more in the works but those are fairly complex and require specific maps, so they will take some time.

There was a survival mode in the beta that was missing in our playtime with the Playwing devs. We were told that this mode is currently being refined and will be added again once its ready.

While Century’s game modes will take time to develop, players will still get content in the form of Events. These Temporary events (about two weeks) will offer new experiences by tweaking existing game modes or offering something fun for the players to engage in.

Furthermore, playing Century’s games modes can get you dragon eggs as you gain XP to level up. The game has an Egg system where players can earn eggs from chests and hatch Baby dragons that can grow into full-fledged adult dragons.

When we did the first two betas for Century, pretty much the most requested thing was ‘baby Dragons, please!’ said a Playwing developer excitedly.

The eggs are RNG drops and there is a specific pool of dragons you can get. Some legendary dragons are shop exclusive. These eggs aren’t loot boxes in the sense that you don’t have to purchase them. Dragons are hatched via equipping them and playing game modes to gain XP.

Besides the Dragon eggs, players can earn coins, banners and titles to earn from chests and by completing daily challenges and quests.

All this seems like it will fit a battle pass model. When asking the devs if Century was going to have a battle pass, they mentioned that it’s being considered, but for now the focus is on the egg system and rewards through their daily challenges and quests.

Monetization in Century is currently in the form of classes and legendary dragons that you can buy. There are also founder packs that are available to buy before Century’s Launch.

The founder packs in Century Age of Ashes are there to support the game before release. For post-launch paid packs we will have to wait and see if the developers implement a system like that.

Moving towards more social features for the game, we wondered if Century would have clans or guilds. Unfortunately, there are no Clans or Guilds currently in Century Age of Ashes, but if any clans or guilds etc are added, it would have to fit the theme and universe of Century well.

The devs consider the social aspect very important and are planning to add social features however it’s a work in progress. Currently, you can squad up with 6 players to find matches.

Finally, we rounded up our questions by asking about player accessibility options in Century. While playing, we experienced thrilling, high-speed battles, but this could be cause for concern for those with motion sickness.

The devs stated that they have played around with locking systems, but the speed of the game caused issues. Currently, settings can make adjustments to FOV, but the element of aim needs to be maintained via the rigid camera. Accessibility for blindness levels was emphasized and more options are also being considered to make Century an overall welcoming experience.