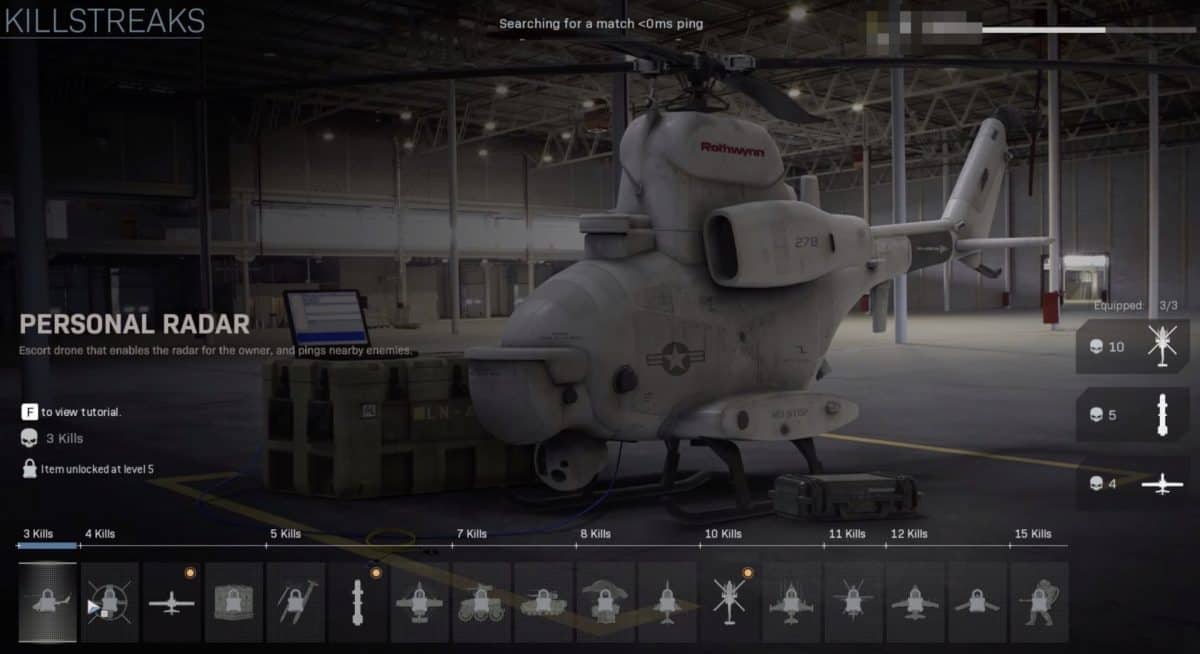 Even though the game has been out for a few years, Modern Warfare (2019) remains the best Call of Duty game from the past few iterations of the franchise. The game owes its success to incredible gunplay and the franchise defining killstreaks. To help you out further with these killstreaks and how to turn the tide in your favor, we have compiled this Call of Duty Modern Warfare Best Killstreaks guide.

The Killstreak is part of your class setup in Modern Warfare – you can set three Killstreaks, meaning that you only have access to 3 (of your choosing). Seeing as each Killstreak requires a unique number of kills to actually attain, you have to wisely choose which one would work for you best.

If you’re confident in your abilities and think that you can get a large number of kills and unlock the high-level Killstreak, then equip it; but if you’re not so confident then it’s better to set up Killstreaks that require a smaller number of kills.

Regardless, this guide will help you give an idea of the best Killstreaks in the game. This list is based on the actual requirement to attain it, the way the ability actually assists you, and how much of a boost it gives to your chances of victory. However, before getting to the best Killstreaks, we will first go over all the Killstreaks available in the game – this includes the number of kills needed to activate each Killstreak in CoD MW.

Personal Radar
Requires 3 Kills. Unlocks at Level 5. Escort Drone that enables the radar for the owner, and pings nearby enemies.

Shield Turret
Requires 3 Kills. Place down a turret with a shield at the front. Pretty handy and can be put down almost anywhere for you to mow down closed corridors or while helping your team guarding down an objective.

Counter UAV
Requires 4 Kills. Unlocks at Level 22. A drone that constantly emits a scrambling signal, disabling enemy mini-maps and incrementally disrupting their senses the closer they get to it.

Care Package
Requires 4 Kills. Using this killstreak will drop a care package to your location which may contain a random kill streak.

Cluster Strike
Requires 5 Kills. Call down cluster strikes on a desired location. Helpful for clearing out enemies in a location that you otherwise can’t reach on foot.

Cruise Missile
Requires 6 Kills. Control a long-range missile that will strike down on any location that you guide it to.

Wheelson
Requires 7 Kills. Unlocks at Level 23. This little mini-tank can absolutely level the battlefield thanks to its immense stopping power. Your enemies will be hiding when you bring this baby out.

VTOL Jet
Requires 8 Kills. Unlocks at Level 20. Releases an initial missile barrage before guarding the location of the player’s choice.

White Phosphorous
Requires 10 Kills. Unlocks at Level 27. Cover the battlefield with white smoke incendiary canisters that will weaken the enemy and burn any that wander too close.

Support Heli
Requires 11 Kills. Unlocks at Level 11. Call in a heavy assault Heli with twin turrets to patrol the map.

Juggernaut
Requires 15 Kills. Unlocks at Level 30. Request a package that equips you with the Juggernaut assault gear. Your minigun stays in the game even after you die as the Juggernaut.

How to Get a Tactical Nuke in CoD Modern Warfare

The tactical nuke is sort of a hidden killstreak in Modern Warfare. In order to get it, a player has to reach a killstreak count of 30 to trigger the nuke and end the match with a game ending explosion. You might be wondering does Killchain work for a Nuke, but unfortunately, it does not so you have to get those 30 kills by your regular equipment and within a single life.

Now that you’re aware of every Killstreak available to you, let’s get down to business and talk about what we consider to be the best in Call of Duty!

Personal Radar
The Killstreak requiring a total of 3 kills, is the perfect device for practically anyone. By knowing exactly where your enemies are, you can either mount a defense or set up an offensive tactic. Either way, this easy-to-acquire killstreak makes it easy to know just where you are, in relation to all your enemies, standing in the battlefield.

Care Package
The care package is almost like a loot box, you’re not exactly sure on what you’re gonna get but rest assured that it will be something worthwhile – it could even be a high-tier killstreak ability.

Yes, this killstreak (requiring 4 Kills) can actually get you an ability that would otherwise take far more to attain. Even though it’s a bit of a gamble, the high risk/reward gambit leans more towards the latter than the former.

Gunship
Now this one’s a bit more difficult to attain, so it’s only recommended for veteran players who are confident in their abilities. But for those who think themselves lucky, this killstreak has the power to wipe out entire squadrons.

If your enemies happen to be close to one another, one hit from the Gunship could potentially wipe all of them out. And the best part is that a Gunship cannot be taken down by anything short of a few hits from the PILA launcher.

Infantry Assault Vehicle
This one has the benefit of assisting you and your team. Despite the fact that its own mounted weapon isn’t necessarily something to boast about, it has the added benefit of providing transportation and shelter to your teammates and having enough fortitude to stand tall even after being hit multiple times.

It’s the perfect item that’ll keep you and your team safe while having enough fire power to make your enemies take cover or run away. It also only takes 7 kills to attain, so there’s that.

Wheelson
Requiring the same number of kills as the Infantry Assault Vehicle, it differs in that it cannot carry any team members (is totally unmanned) and fires air turrets. This is the Killstreak recommended for snipers. Essentially, you can snipe from a distance and call Wheelson as your man on the ground; covering both close- and long-range combat, this is the perfect Killstreak for a sniper main.

And that’s that! Out of the 18 available killstreaks in CoD MW, these are, in our opinion, the 5 Killstreaks any player would find useful. Of course, the Juggernaut has the potential to absolutely obliterate all opposition but requires a staggering 15 kills to attain, so it may be a bit too much for most players. Give these a whirl and find out for yourself if these are truly the best.