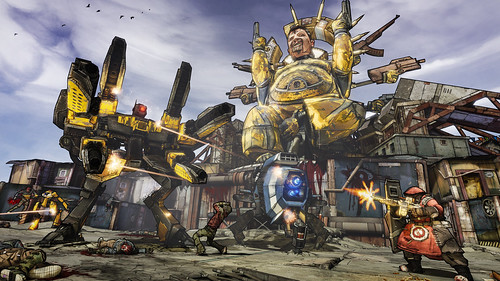 Talking about weapons, first Borderlands featured a variety of weapons featuring 87 “bazillion” guns. The variety was there but the distinction between the brands was not that clear.

In Borderlands 2, each manufacturer will have distinct appearance and characteristics. Following are some of the primary weaponry groups included in the highly anticipated sequel of the game.

Bandit
Bandits will make their own weapons in Borderlands 2. They might not be that advanced to produce quality products but the weapons produced by them will have the largest magazines of any other manufacturer.

Hyperion
You might have remembered the typical white and yellow scheme of Claptrap’s weapons in the original Borderlands? The unique style will back in the sequel.

Vladof
Vladof’s weapons have the highest fire rates among Pandora’s all other weapons. All the weapons have minigun barrels as weapon attachment and look like assault rifles as ak-47.

Tediore
Interesting feature of this class is that you can use the magazine as an explosive. Players usually have habit to reload even if the magazine still has bullets in it. You can detach these magazines having bullets and throw them towards the enemy acting as explosives. Now it depends on you whether you use the complete ammo of your magazine or left some for fireworks.

Torgue
Torgue weapons specialize in mass destruction. If you like to make a big impact then you are going to love these weapons. Imagine the Gunzerker wielding 2 Torgue weapons? Insane it would be.

Maliwan
Nothing much is known about the weapons of this brand. According to Gearbox, these are one of the sleeker options in the game. We will have to wait a little longer before the official curtain is revealed.

Jakobs
This class includes antique-styled rifles and guns. They may look old but the damage caused by them is un-parallel to most other weapons in the game.