Borderlands 2 – A Look At The Assassin Zer0 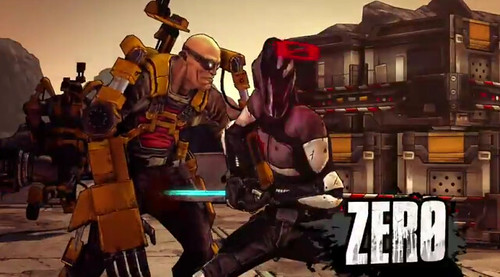 Why? Well, let’s just say this Zer0 has a nag of being illusive, tricking, and best of all, stylishly awesome. In case you are wondering what I’m talking about (which I am actually quite sure you are), I’ll put a brake to the hint-giving sentences and cut to the chase

Zer0 is the Assassin in Borderlands two, and like the other Borderlands 2 characters, is built around an iconic or signature ability that distinguishes him from the rest.

This ability of his allows him to send out a decoy and enter a temporary state of stealth, in which he is undetectable. As you play more with Zer0, his leveling allows you to meddle with this core ability of his, ultimately activating new skills to modify the functionality of the stealth system.

So that’s Zer0 for you. He’s cool looking, because you can’t really see his face, and also because he has a very fancy sword.

It really is true isn’t it – all it really takes to create an awesome character is to mask his face, give him a cool sword and some sleek set of moves (Darth Vader of Star Wars and Cyborg Ninja of Metal Gear Solid, anyone?). The formula never seems to get old, and I’d speak safely for everyone to say that we’re glad about this fact.

Coming back to Borderlands and particularly Zer0, the assassin seems to have a vague background story, at least for the initial bit of the game. At the beginning, you don’t quite really know who/what he is and why he is.

All you know is that he’s quite cool, and he seems to like sniper rifles (something you’d expect from an assassin). You’ll also get to know that is the real name isn’t Zer0 (oh really?! – he’s simply known as that because of the ‘0’ that pops up on his glassy face-plate every time he assassinates someone.

Contrary to how much he uses in sword in one of the recent trailers of the game, Zer0 actually can equip the blade formally like every other weapon. Instead, the sword slashing is actually his basic melee attack, and its effectiveness can be enhanced.

According to the Borderlands 2 development team, this is because of the ‘digistruct’ concept that has been used throughout the game. This concept is basically the ability of having a sort of digital blueprint that can be built on demand. Yeah, it’s a little hard to swallow, so I’ll explain it simpler words.

Basically, this means that a lot of things, including vehicles and some other weapons, are actually holographic or digital constructions, made out of whatever they came out from. So a weapon may be digistructed from its hoister once pulled out, and similarly, Zer0’s blade is digistructed when he pulls out the ‘handle’, somewhat like a light-saber.

Now, shifting slightly away from his sword and coming back to the more applicable skills of his, let’s discuss his signature decoy ability.

This ability of creating a clone decoy of himself and sending out to fool enemies allows Zer0 to close-in to foes much more easily than other characters. In the higher leveling stages of this ability, the decoy can destruct and cause shock damage to surrounding enemies.

While the decoy is present, Zer0 is actually in stealth mode, being undetectable. In this mode, he gets a special type of vision in which enemies glow, and their critical-hit regions are revealed. However, he isn’t invincible in this mode, and can take damage from explosives and other forms of splash damage.

Timing is the key when in the stealth state. Actually, I’ll take it one step further by saying that timing, and decisions is the key to the stealth state. This is because you have two options when in stealth: to either attack (which will get you out of stealth) early or prolong your invisible period right until the stealth timer is just about to expire.

Another very cool skill that Zer0 has is that every time he shoots an enemy his melee damage rises for a few seconds. Conversely, if he melees and enemy, his projectile weapon damage also rises for a few seconds. This can be useful to actually carry out some sleek makeshift combos and deal out massive damage, combined with his signature decoy ability.

Zer0 the Assassin is definitely my type of a character – he’s cool, his slim, and has a sweet katana-styled sword; he likes sniper rifles, and he has an obsession with the number ‘0’. Expect to see him in action when Borderlands 2 comes out in September this year.