Bethesda Caught With Its Pants Down Again, Fallout 76 Microtransactions Aren’t Cosmetics Only 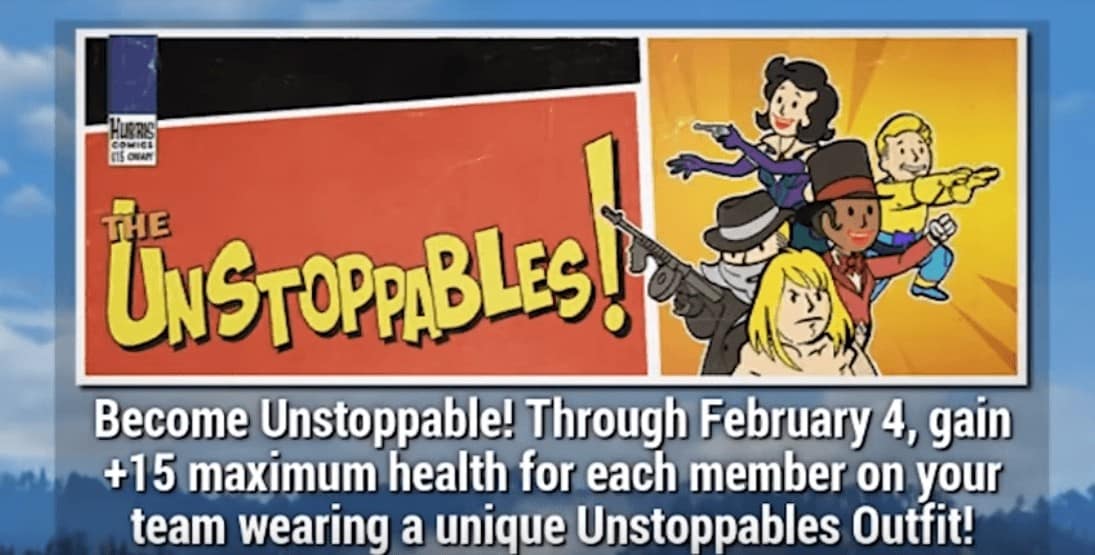 Bethesda and its Fallout 76 is a meme at this point. But every time we think the Fallout from Fallout 76’s launch is dying out, Bethesda shoots itself in the foot again. Bethesda Softworks is caught with its pants down after lying about microtransactions in Fallout 76.

Time and again Bethesda stated that Fallout 76 microtransactions are cosmetics only, however, that isn’t the case, at least not anymore. Bethesda introduced items to Fallout 76’s in-game marketplace that gave players a clear gameplay advantage.

The items were introduced between January 29 and February 4, 2019, that gave them a boost in the game. Logging in to the game during this time showed the following banner.

The banner advertised the launch of The Unstoppables costumes. The cosmetics items are themed after The Unstobbales group from the Fallout comic book series. Finding all five of the comic books in previous Fallout games gave players stat boosts. In Fallout 76, finding The Stoppables Comics and consuming them gives them a chance to avoid damage of a certain type depending on which issue they find and consume.

However, the week-long event held earlier this month added The Unstoppables costumes to Bethesda Softworks store within Fallout 76. While all in-game items are cosmetics, these weren’t and gave players who purchased them a gain of +15 maximum health for a limited time.

Become Unstoppable! Through February 4, gain +15 maximum health for each member of your team wearing a unique Unstoppables Outfit!

You will be spending around $32 on all 4 costumes. There is a fifth costume, Mistress of Mystery, but it can be earned for free via gameplay grind.

The Unstobbales costumes are still available in Fallout 76 but no longer provide an HP boost.  Still, it doesn’t change the fact that this week-long event was pay-to-win as it gave players a substantial gameplay advantage.